University of Arizona researchers have developed a system that would enable users to monitor the lettuce supply chain, or study the productivity of each section of a field.

May 05, 2010Researchers at the University of Arizona's School of Plant Sciences are preparing to commercialize a system that employs radio frequency identification and GPS technologies to enable farmers to determine the fertility of lettuce fields, while also allowing retailers to trace lettuce back through the supply chain. The system includes RFID- and GPS-enabled harvest-aid machines that are now being used to track not only when and where lettuce was picked, and but also when it was moved into cold storage.

Several years ago, Kurt Nolte, a plant sciences professor and researcher at the university, began seeking a technological solution that would offer farmers a better view into the productivity of their fields, as well as different sections of the same field. For example, some areas of a field may yield considerably more lettuce than others, based on water or soil conditions. 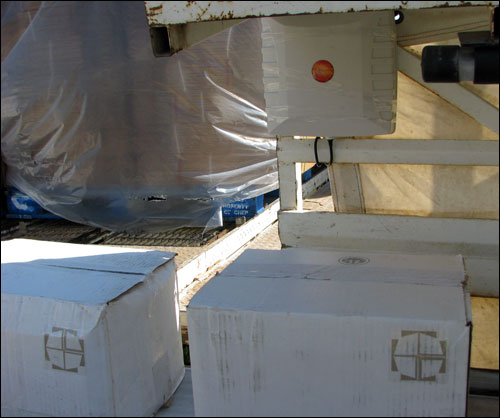 As the cartons move along a harvest-aid machine conveyor belt, an RFID interrogator reads the attached tags.

While he was investigating whether this could be accomplished using RFID, Nolte says, spinach tainted by e. coli bacteria sickened hundreds of people in September 2006, claiming several lives. At that point, he considered how the technology could also be utilized to allow for trace-back in the event of a food-borne illness or other contamination to the lettuce.

Nolte, who serves as the intermediary between the School of Plant Sciences and Yuma County's agricultural industry, designed an RFID system that would be installed on harvest-aid machines (large contraptions brought onto the field at harvesting time, to expedite the manual cutting and processing of crops), as well as at cooling facilities. To develop the system, he worked with the Arizona Iceberg Lettuce Research Council, RFID hardware provider Sirit, which supplied the EPC Gen 2 ultrahigh-frequency (UHF) passive RFID tags and interrogators and GPS devices, and RFID firm TrackerPoint, which provided the integration software that links data to the university's database. For the past two years, Nolte has tested the system in pilot projects in Arizona; he recently described those pilots to an audience at RFID Journal LIVE! 2010, held last month in Orlando, Fla.

Typically, iceberg, romaine or leaf lettuce is harvested by hand, with a 50-foot-wide harvest-aid machine that makes the work more efficient for farm laborers. Workers cut each head of lettuce by hand, and then send it down a chute on the harvest-aid machine. There, on another side of the machine, other workers receive the heads, wrap them in plastic film, pack them into cartons, and place those cartons onto a separate conveyor belt, which then takes them to another section of the harvest-aid machine, for loading onto pallets. The pallets are then taken by truck to cooling facilities, typically less than 10 miles from the field, all within the same day.


Nolte and his fellow researchers installed a Sirit RFID reader antenna above the conveyor belt of three harvest-aid machines. They printed and encoded ID numbers on RFID paper or plastic labels at their own laboratory, and attached them to the cartons that would be used on the field. Each RFID label also contains farm and product information printed in human-readable text, as well as a 2-D bar code, though the bar-coding is not currently being used in the system. The tagged cartons are then sent to the field with the harvest-aid machine. Data linking the RFID tags' unique ID number with the field in which the lettuce will be harvested is stored in the university's back-end database, using integration software provided by TrackerPoint.

When field workers arrive each morning, they first input their names into the back-end database on a computer at the harvest-aid machine, linking them to the day's harvest. They then pick the lettuce and load it in the cartons, which are placed on the conveyor belt, and the tags are read before being loaded onto pallets. At the same time, a GPS unit on the machine identifies the precise latitude and longitude of the spot at which the lettuce is being harvested. That information, along with the RFID number, is then forwarded to the back-end system via a cellular connection.

Kurt Nolte, a plant sciences professor and researcher at the University of Arizona's School of Plant Sciences

The cartons are placed onto trailers and trucked to the cooling facility. At two of these sites, the researchers have installed fixed Sirit interrogators that capture the ID number of every carton's RFID label, and then transmit that data (via a cabled connection) to the back-end software, which updates each carton's status to indicate it has been placed in cold storage.

The software provides several options, Nolte explains. If a specific head of lettuce is later found to be contaminated, the ID number of the tag placed on that particular carton could be used to track where and when the lettuce was picked, also enabling users to track all other lettuce picked within its vicinity, or by the same employees who had input their names at the beginning of the shift.

In addition, the software can be used to analyze soil productivity. By utilizing GPS data together with RFID reads of each carton packed on a field, the software can provide a map of that field, with shaded areas indicating the locations of the greatest and poorest yields.


After using the system for one year, the University of Arizona was able to provide growers with specific data regarding the productivity of each section of their lettuce fields, as well as make recommendations about how to improve the yield in the less productive areas. In this second year, Nolte says, the researchers are now examining whether the growers are successful in their efforts to increase productivity in those troubled areas identified by the RFID-GPS system.

The system has been working well, Nolte says, and requires no additional labor on the part of field workers. The group has now submitted the solution to the U.S. Patent and Trademark Office, and ultimately hopes to sell the system to a technology provider.

Nolte hopes the solution will be useful not just for lettuce growers, but also for farmers raising other crops that are packed in cartons or bins, including citrus, nuts, or other fruits or vegetables. He notes that mandates related to food supply chain visibility will make a system such as this one more critical. For example, the Produce Traceability Initiative (PTI)—sponsored by the Canadian Produce Marketing Association, the Produce Marketing Association (PMA) and the United Fresh Produce Association—requires that by 2012, all lettuce sold in retail locations must be traceable to the farm at which it was grown. In addition, the National Leafy Greens Marketing Agreement (NLGMA)—crafted by PMA, the United Fresh Produce Association and Western Growers—may spur the adoption of technology allowing better supply chain traceability, as part of an agreement between shippers and growers in which the shippers sell products only from growers that use accepted good agricultural practices.

The University of Arizona's system is currently being used at several participating growers' fields in the Yuma area, near the Mexican border.