By Dieter Uckelmann and Dennis Brandwein

University of Bremen researchers explain how a vehicle's license plate can function as an antenna for a passive UHF tag, outperforming smart labels on windshields, as well as on-metal tags.

Feb 27, 2012Not long ago, the use of passive ultrahigh-frequency (UHF) RFID tags was said to be problematic in proximity to metal, since UHF radio waves bounce off metallic objects. Recent tests, however, have shown that the read ranges of UHF tags mounted to metal can match those of smart labels used within other environments. Nonetheless, even greater read ranges can be achieved if the metal structure itself is used—for example, through a slot antenna design within the metal surface—a method that could be called in-metal RFID. The BIBA Institute, at the University of Bremen, working together with J.H. Tönnjes E.A.S.T. GmbH & Co. (a developer and manufacturer of license plates) and Kathrein Sachsen GmbH (an RFID reader and antenna supplier), has developed and tested new passive RFID license plates that outperform smart labels on windshields, as well as on-metal passive tags for vehicle identification.

Electronic vehicle identification (EVI) is a promising new development to enhance such applications as vehicle access control, electronic toll collection or complex traffic control. To date, active transponders operating in the UHF and microwave frequency ranges have been employed. However, passive transponders can be more compact, and are available at significantly lower costs. Moreover, they are more durable and environmentally friendly, since passive transponders do not require a battery. Then again, the determining requirement in toll collection and traffic control is having a read range of 5 meters (16.4 feet) and beyond, as well as readability at speeds of up to 250 kilometers per hour (155 miles per hour).

J.H. Tönnjes E.A.S.T. focused its strategy on the development and design of passive UHF RFID license plates. The idea was to move beyond using standard on-metal RFID tags, as these are still expensive compared with RFID smart labels. Instead, the company considered an integrated design, in which the license plate itself would function as an antenna by utilizing a slot-antenna layout.

First, prototypes were produced, which offered promising results comparable to the performance of on-metal RFID tags. However, J.H. Tönnjes E.A.S.T. wanted to go beyond the current state-of-the-art, so it launched a series of tests and improvements in partnership with the University of Bremen and Kathrein Sachsen.

But there was soon a demand to verify the improvements in realistic scenarios. Various test facilities, such as automotive proving grounds and an airport, have been used to test the solution at multiple driving speeds, antenna heights and traffic scenarios. Up to three vehicles were driven on two lanes in the same direction, only a short distance from each other. Driving speed varied from 10 kilometers per hour (6.2 miles per hour), in order to simulate access control simulations, to a maximum of 250 kilometers per hour (155 miles per hour) and beyond, to prove feasibility—for example, for use on German high-speed highways. 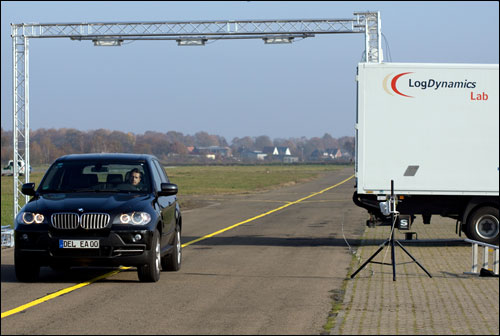 The results with the final, optimized RFID license plate designs were amazing. The reading antennas were mounted at a height of 5 meters. The positioning of the RFID antennas at the bridge spanning across the high-speed test ground required special attention, as the surface of the high-speed circular road-testing track is tilted at an angle of 35 degrees. The RFID license plates achieved 100 percent reading rates at all speeds up to 250 kilometers per hour, through the final test phase in October 2011. Even at the maximum speed of about 260 kilometers per hour (162 miles per hour), the RFID license plate remained readable. Overall, the tests encompassed more than 1,500 kilometers (932 miles) of driving distance.

The test showed quite clearly that read-range improvements in passive UHF RFID applications may still be achieved. Chip, inlay and antenna improvements allow the technology to move beyond prior limitations. Additionally, a metal environment is not necessarily a burden—it may be an opportunity that can be exploited through innovative in-metal designs—as provided, for example, via the innovative license plates created by J.H. Tönnjes E.A.S.T.

Dieter Uckelmann is a manager at the University of Bremen's LogDynamics Lab, which serves as a research center for the use of RFID, sensors and other mobile technologies within logistics. Dennis Brandwein works as a research scientist at the BIBA Institute.