Polish chemical company Grupa Azoty is planning its deployment options after piloting UHF RFID technology from ProxiGroup to manage the status and locations of its bagged products as they are packaged and then transported into zones.

Feb 07, 2020Polish chemical company Grupa Azoty has completed an RFID technology pilot intended to determine if its bagged products could be tracked as they are produced, stored and shipped to customers. The solution, provided by ProxiGroup, detected the locations of packages according to zones, then helped workers view those locations when collecting products for shipping, says Maciej Kolinski, Grupa Azoty's product manager.

That could provide improved operational efficiency at production sites, Kolinski explains, while reducing the risk of shipping errors. With the deployment, passive UHF RFID tags on large aluminum-packaged bags of chemicals were automatically detected by fixed readers as the palletized bags entered and left multiple zones within a warehouse. The company is now planning its strategy regarding a permanent rollout that could include the entire warehouse, as well as up to a dozen other warehouses on the company's Tarnów site or at other locations. 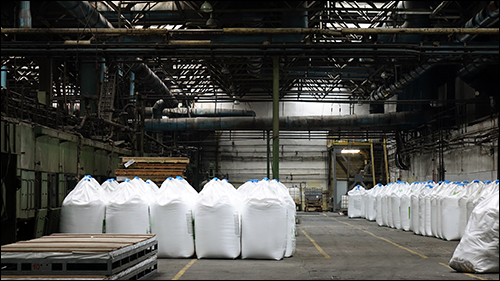 Grupa Azoty, one of the country's largest companies, is located in the Mościce district of Tarnów, in southeastern Poland. The company was established in 1927, during the Second Polish Republic, at which time it was considered among Europe's most modern factories. These days, Grupa Azoty is the largest chemical company in Poland and a producer of fertilizers, plastics, chemicals and pigments. The firm produces approximately 30 different qualities of polymer polyamide 6 at two plants in Tarnów. The products are packaged and labelled, then are either shipped to customers, placed in a staging area for future shipments or stored in one of the warehouses onsite.

"Before the pilot," Kolinski says, "we didn't have anything like RFID, so we had to do everything manually." Tracking goods thus meant recording production on pen or paper, or manually inputting that data, as well as recording the location of each finished item. "It's really challenging to manage all these products in seven warehouses," he states.

The pilot was intended to introduce a system that could automatically identify goods within a specific warehouse and zone. The company began working with ProxiGroup to create a solution. "It was important that our software accomplished zone-level prediction modeling," says Curtis Shull, ProxiGroup's CEO, so the company designed its ProxiTrak software to offer a predictive model so that Grupa Azoty could forecast RFID coverage performance and "outputs for hypothesis tests during the pilot."

The pilot was intended "to show what possibilities of process improvement and work optimization RFID gives," says Alexsandra Sekowska, ProxiGroup's COO and cofounder. ProxiGroup worked with Grupa Azoty throughout the course of several months of planning and mapping out zones for the pilot, while deploying the system took only about a week. The RFID solution had to overcome several challenges: the tags needed to be read effectively on a metallic bag, while ProxiGroup also needed to create a unique RFID number for each bag that would be linked to the company's existing numbering system for product identification by serial and lot number.

Grupa Azoty opted to conduct the pilot on one of the company's two production lines. The line employed for the pilot produces up to 150 bags of product, each stored and transported on a single pallet. During the pilot, bagged products are tagged as they come off the production line. Each tag ID is linked to data about a particular product, including its date and time of production and the quality of the polyamide, in ProxiGroup's software, which is hosted on a dedicated server. 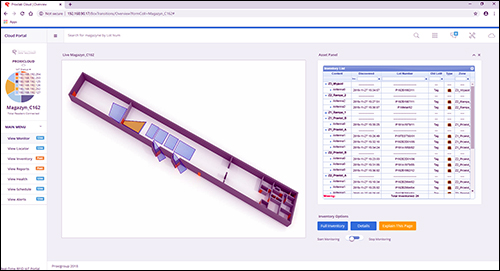 "We used the LAN version," Shull says, based on the company's requests, though the system can also be provided as a hybrid LAN-cloud, or complete agnostic cloud-based system. The product is assigned to a specific location within one of the warehouses, and that data is synchronized in the virtual "digital double" zone in the software. For the pilot, RFID reader gates were installed in two buildings. One building was the warehouse in which production was taking place. A reader gate at the entrance and exit to that site enabled the system to detect when each tagged product was removed or a new product was introduced in the second warehouse.

At the second warehouse, where goods were stored, the team created four zones in a portion of that building. Each zone holds approximately 25 metric tons (27.6 U.S. tons) of product. Another reader detected tags as they passed through the entrance via a thoroughfare connecting the buildings. The readers were made by Alien Technology. As tagged items come off the production line, the software identifies each item produced, as well as when it leaves the building in which it was made, when it enters the warehouse and the zone in which it is placed. The system can also detect when the item is removed.

Staff members are equipped with tablet computers that can access the software, enabling them to view which items are located within each zone. They can use handheld readers; ProxiGroup provides readers from CipherLab and Zebra Technologies.

Warehouse operators use the handheld device to enter the ID number or lot number of the particular product they seek, and then view the zone-based location. The mobile reader system provides Geiger counter-type detection of a product within about 5 meters (16.4 feet). Users can simply select a prompt to locate a given product, explains Krystian Marecki, ProxiGroup's principle software engineer, and the reader will detect the RF signal of the tagged item, then beep faster and louder as the device approaches it.

Deployment of the technology took place within less than a week, Shull reports, in large part due to the software's CAD-based predictive modeling. "That's important so that companies can ascertain an ROI [return on investment] very quickly," he states. A permanent deployment could be accomplished at a rate of about a week per warehouse. One challenge for RFID tracking was presented by the aluminum foil packaging of the chemicals, Kolinski says. 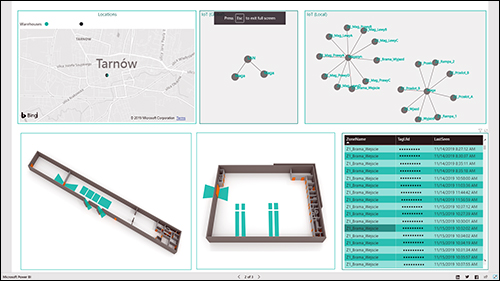 To resolve this issue, Marecki notes, ProxiGroup adjusted the tagging location to the edge of the packaging so as to provide separation between the tag and the packaging. The company used on-metal tags from Comex. In addition, it attached two RFID tags to each package, one on each side, so that RF transmissions would not need to pass through the package itself. "We also adjusted the mounting of two antennas in each read zone," he adds.

ProxiGroup customized the tag ID to reflect the same nomenclature used for the product's lot number. When each tag is produced, the ID and lot number for its corresponding item is created in the software, and the lot number is then added to the Electronic Product Code (EPC) number written to the tag. The software creates a digital twin in the warehouse with 3D zones, in order to provide a view into where each product was last detected and, therefore, the zone in which it can be found. The CAD-based mapping also enables users to change their zones quickly, Shull says, when operations require changes within facilities.

The company is now reviewing the results and waiting for management decision about financing the system. "The profit we could have would be automization of the process" involved in tracking products, Kolinski says. Currently, the firm employs two staff members to manually track the paperwork indicating which products are being produced and where they are being transported. It could also reduce the risk of errors in identifying products for shipping, he says.

"From my point of view, the technology is really useful, especially for our forklift drivers," Kolinski says, "so they can see where in the warehouse the product is." The pilot also found that the time required for workers to search for a specific product within a given zone was reduced from several minutes to several seconds.