The IoT-based app can be used with a GM vehicle's OnStar solution using cellular connectivity, while the Geotab system can also incorporate Drivewyze's weigh-station bypass application.

Mar 11, 2020Fleet-management and vehicle-tracking company Geotab has launched several new applications and partnerships leveraging its Geotab Integrated Solution platform, which now provides OnStar service for those using General Motors (GM) vehicles, and to enable weigh-station management with the addition of Drivewyze's app. Both OnStar and Geotab in-vehicle devices use cellular connectivity to transmit data to and receive it from a server.

By partnering with GM, the company is offering its Geotab Integrated Solution via a vehicle's existing OnStar solution from GM. In a separate agreement, Geotab is incorporating Drivewyze's weigh-station bypass app as part of its own Geotab Drive app, leveraging the Geotab Go device. The GM partnership is aimed at simplifying vehicle management by integrating Geotab's own functionality with a factory-installed, GM-engineered OnStar module. 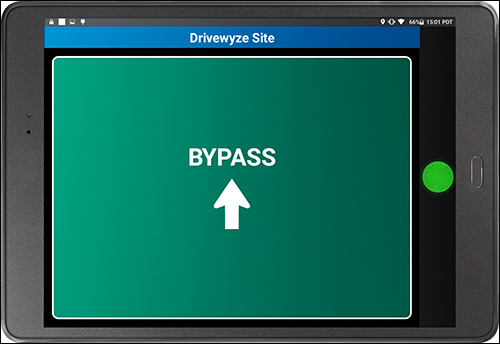 This integration allows fleet managers to access data on a single dedicated portal using OnStar, rather than requiring an additional piece of hardware, according to Sherry Calkins, Geotab's strategic partners VP. Other companies, such as Volvo and Ford, have joined similar partnerships with Geotab. With GM's OnStar, the integration allows fleet managers to access vehicle and driver performance data from their compatible Chevrolet, Buick, GMC and Cadillac cards via the factory-fit, cellular module, providing them with access to one dedicated portal for all data.

"One of the big things this provides is choice," Calkins says. Companies can leverage Geotab-based data without the need for additional hardware. "When they receive the vehicle, they can literally just activate the system and the data starts to flow." That's an alternative to utilizing an electronic logging device (ELD) that must be installed by being plugged into a vehicle's OBD-II port. Companies may wish to use a solution that includes the Go device in some cases, however.

"It's a mix today, depending on the client's use," Calkins states. Some customers require hardware add-ons, for example, if they are tracking the conditions within a refrigerated unit for cold chain system management. They could use the Go device integrated with a vehicle's own system such as OnStar, for example, as a combined approach. As with other ELDs, the Go device plugs into the OBD-II port. Whether the system is used with OnStar or the Go device, Geotab provides a driver score card and tracks driving behavior, along with the vehicle's condition.

GM has offered its OnStar solution for several decades as a connectivity fleet platform, and for the past five years to allow users to view the locations of vehicles in real time, as well as other data from the vehicle itself, such as the time, the date and sensor measurements. It can identify diagnostic information, such as whether the "check engine" light on the dashboard is illuminated, what the tire pressure is, and details about braking, acceleration and GPS location. Geotab manages that data and provides reports, alerting and other services for fleet managers and drivers.

In May of this year, for instance, Geotab plans to launch in-cab driver feedback as a coaching tool. The new feature will automatically alert a driver if he or she is travelling above the legal speed, or if he or she is braking too suddenly or accelerating too harshly. In that way, Calkins says, the system can coach that driver in real time. In the meantime, a fleet administrator can view data on his or her desktop, as well as receive alerts, view changes in a driver's performance and safety score card, and read reports. "You can do all kinds of customization in the platform," she states.

Companies such as AutoZone are using the Geotab solution with the OnStar system. That enables a fleet-management solution without additional hardware, says Clay Gaudet, AutoZone's fleet manager. The company's delivery vans transport automotive parts to customers or retail sites, and the firm is using the system to track each vehicle.

The system was just launched, Gaudet reports, but he expects it to solve a hardware problem: the constant unauthorized removal of the Geotab device by drivers, which he says is now impossible since OnStar is imbedded in the vehicle. Additionally, he notes, personnel will no long need to remove the device from the vehicle when life-cycling or remarketing the vehicle.

GM is using the Geotab solution to track its own inventory of vehicles as they move through the supply chain to dealerships. When a car is in "shipped" status, data can be collected as it is leaving a railyard, until it reaches the dealership. That feature leverages the OnStar GM sensor data, with Geotab managing that data. In that way, the company can reduce its order-to-delivery time for fleet vehicles.

Geotab has partnered with Drivewyze to include the latter's functionality in the Geotab Drive solution, whether or not the system is used with the Go device, according to Scott Sutarik, Geotab's VP of commercial vehicle solutions. Geotab Drive provides service updates for fleet management, such as the ability to track hours of service, in order to ensure they don't go beyond the authorized 11 hours. Drivers can view their hours on a tablet. With the partnership, they will also potentially reduce the number of stops they make at weigh stations.

With the partnership, Drivewyze's PreClear app is built into Geotab Drive as an always-on bypass service, says Doug Johnson, the company's VP of marketing. The solution employs GPS and cellular networks to identify a vehicle's location as an alternative to traditional active RFID transponders. "It's a nice integration and allows drivers to continue doing what they've always done," Sutarik states. "The benefit is primarily all about time." Drivers and fleets with a good safety rating could bypass the weigh station in the Geotab Drive system.

First, a carrier would enroll in the weigh-station bypass program. The Drivewyze software pulls identifying truck and carrier information and uses it to determine safety score, registration status and other state and federal screening criteria. The system uses GPS data to identify when a vehicle is approaching a weigh station. The software then utilizes the safety score data (and weight if the truck driver over a weigh-in-motion scale) to identify whether that vehicle needs to stop. The driver can view an alert on the tablet mounted in the vehicle, which indicates that the station is near, and receive instructions either to stop or continue driving.

Officers at the inspection station also view Drivewyze data on a PC or display. They can then identify which vehicles are approaching, as well as a picture of each vehicle and whether or not it needs to stop. This provides a boost in efficiency for the fleet manager and the driver, Johnson explains, while aiding the weigh stations, which have been experiencing increased congestion due to additional drivers being on the road.

"That means inspectors can focus on trucks that need more scrutiny," Johnson says. As the company expands, he adds (its solution is certified in 45 U.S. states and two Canadian provinces), it has a variety of distribution partners, including Geotab. The system offers an alternative to deploying active RFID-based transponders in vehicles and RFID readers at each weigh station. The Geotab solution can approximate a vehicle's location with GPS as accurately as an RFID based system could, Johnson says, noting, "Network latency used to be a big issue" when cellular networks were in their early years, but that, he says, is no longer the case..

At present, according to Johnson, the location data is more precise and communication between the server and a vehicle is faster. The system can also provide safety alerts, such as if a vehicle approaches a high-risk, high-rollover zone, low bridges or steep grades. With Drivewyze provided on the Geotab Drive app, all of that data can be collected and managed on a single platform. "This is a nice way to tie in two applications," Sutarik states. "Rather than having multiple applications, you can do it all in the Geotab Drive application."