CoughAware has been designed to help caregivers of young or elderly patients to respond quickly to impeding respiratory attacks, and possibly avoid the need for hospitalization.

Jul 21, 2016Quvium, a U.K. startup, has partnered with DSP Concepts, a Silicon Valley firm that sells digital signal-processing technology, to create a wearable device that monitors the coughing sounds of patients with asthma, chronic obstructive pulmonary disease (COPD) or other chronic respiratory ailments, in order to alert caregivers when a patient is likely to have an acute attack that could result in hospitalization. Dubbed CoughAware, the device will soon be validated by physicians and technologists at London's King's College, in advance of a clinical trial in the United Kingdom.

"We looked at the progression of respiration problems and found that there are indicators of an [acute attack] beginning six to eight hours before it occurs," says Steve Schmidt, Quvium's CEO. He and James Collins, Quvium's product development lead, began developing an algorithm designed to discriminate coughing indicative of asthma attacks or acute events related to other ailments, including COPD and cystic fibrosis. They then worked with DSP Concepts to integrate this algorithm into other sound-processing algorithms—which could discriminate a cough from, say, a barking dog—and DSP Concepts' machine-learning software, all of which run on the wearable device.

The CoughAware device helps caregivers of children to respond quickly to an impeding asthma or COPD respiratory attack.

The device contains a microphone, an ARM Cortex-M7 processor that runs the DSP Concepts software, a subscriber identity module (SIM) card, and a battery that powers the device and is recharged via a USB Micro2 port. It has no moving parts and is roughly the size of a large automobile key fob. To initiate the device and pair it to a patient, he or she coughs three or four times near the device. According to Schmidt, the algorithms collect and analyze the sound of the coughs to personalize it to the user based on its pitch and sound profile, which is unique to each person based on the size and capacity of his or her lungs.

"The device is always listening, and there are a variety of algorithms running on the processor," explains Paul Beckmann, DSP Concepts' CEO. "The algorithms are asking, 'Is anything happening in the room? Is it a cough?'" If the software determines that it is a cough, then "the heavy-duty machine-learning algorithms kick in" to determine if the cough indicates a worsening condition that will lead to an acute attack. In this way, he explains, "You slowly increase the level of computation to conserve battery strength," because the machine-learning algorithms require significantly more computational power than the initial sound discriminations.

The device can be worn on a lanyard around the neck, but it does not need to be on a user's person in order to work since it tracks only sound, and not body vibrations, temperature or other variables that would require it to be worn. However, the microphone must be within 12 feet of the patient to process the coughing sounds, so most individuals would likely carry the device in a pocket or on the lanyard.

When coughing indicates an impending attack, the device transmits a message to CoughAware's cloud-based software via the nearest cellular communications tower. A text message is then automatically dispatched to the smartphones of one or more caretakers, alerting them that the patient is showing early signs of an attack. If there are multiple caretakers present, the first to respond can use the smartphone to send a reply text message to all of the others, notifying them that he or she is with or on the way to the patient.

Quvium is targeting the product to caretakers of children and the elderly, because research suggests that they are in greater need of assistance in responding early when respiratory ailments worsen. The hope is that if patients can take medicine or use devices such as inhalers early on during an attack, they can avoid trips to the emergency room and, especially for the elderly, prevent the cough from progressing into a direr ailment, such as a lung infection.

The system's simplicity will be a key selling point, Schmidt says, especially since young and old patients are not likely to have a smartphone of their own, and because a caretaker need not download an application to his or her phone.

"Every third ER patient comes in for reparatory problem, according to data from U.S. and Europe," Schmidt reports. "In the U.S., asthma is the number-one reason children miss school days, and data from a clinic in Denver and one at Boston's Children's [hospital] show that 90 percent of asthma attacks in children are avoidable with an early response."

COPD is the third leading cause of death in the United States, following heart disease and cancer, according to the Centers for Disease Control and Prevention. 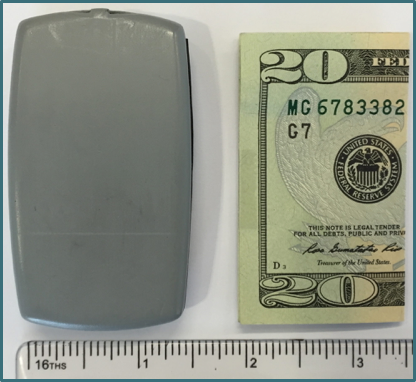 The device is approximately the height of a U.S. bank note.

Quvium uses statistics from the United Kingdom to propose its product's usefulness in addressing health-care costs. Looking only at children with asthma, people with COPD and the elderly with respiratory risks, it found that those who do a poor job of managing their ailments account for roughly 14 percent, 18 percent and 10.5 percent, respectively, of the total pool of that group. Yet, they account for approximately half of all hospitalizations from that pool. Of those, it cites research showing that 75 percent of these admittances are considered avoidable.

To validate the predictions that the CoughAware device makes, experts at a cough clinic at King's College will compare them with the results of a cough analysis machine that is used there. If the CoughAware draws very similar conclusions to those of the college's machine, the university will approve it for a clinical trial, during which patients will use the CoughAware device for a span of four weeks. If the results of that trial are positive, then Quvium will submit the device for CE certification, which is what the U.K.'s national health system requires for this type of device to be prescribed by physicians.

Schmidt expects Quvium will begin selling CoughAware, through physicians, in the United Kingdom by the end of this year or early 2017. It will cost £240 ($320), which will include the device, the CoughAware service and a one-year cellular subscription. If patients wish to keep using the device after the first year, the only fee they would need to pay is £100 ($133) per annum for continued cellular service.

In the United States, CoughAware will require the Food and Drug Administration's 501K approval for medical devices before physicians could begin prescribing it. Quvium hopes to achieve that approval by the end of next year. Eventually, the company hopes to be able to sell CoughAware as an over-the-counter device in both markets.

Digital sound processing could emerge as a useful tool for managing other diseases as well. "If you talk to a pulmonologist, you'll learn there are like 42 different types of coughs," Beckmann states. "We're training our audio detection [algorithms] on cough detection, but this same kind of algorithm could be used for [recording] heart rates, snoring and other thing."

Plus, Schmidt says, doctors could use recordings of coughing to help diagnose an illness. Currently, the CoughAware device issues an alert only to caregivers, because sending an audio file would consume a significant amount of battery power. However, he adds, when the device is recharging, it could be provisioned to forward sound files to the patient's doctor.