A Boston hospital is testing an ultrasound tracking system that can determine a patient's location and monitor vital signs.

Mar 15, 2006Hospitals use ultrasound technology for a range of diagnostic processes, such as evaluating fetus health, diagnosing some forms of cancer, imaging the heart and evaluating flow in blood vessels. Now, Boston's Brigham and Women's Hospital is testing ultrasound as a means of monitoring the location and vital signs of select patients in its emergency department. The test is part of the Scalable Medical Alert and Response Technology (SMART) project, a collaborative effort by researchers from Brigham and Women's Hospital, Harvard Medical School and the Massachusetts Institute of Technology (MIT), funded through the National Library of Medicine. The goal of the project is to explore the use of a scalable location monitoring system that links with vital-sign telemetry to alert health-care providers of potentially dangerous changes in patient health, even if those patients are in a large or ad hoc area, such as in field hospitals established in response to natural disasters.

"Originally, this project was designed for large disaster response, with many patients who need to be identified and located, and whose vitals would need to be monitored, so we could tell who was getting better and who was getting worse," says Tom Stair, an attending physician in Brigham and Women's emergency department and part of the SMART team. "We envisioned something that could be brought on-site in ambulances, with devices that would track patients using GPS. But I suggested the [emergency department] waiting room would be best place to start testing a system like this." 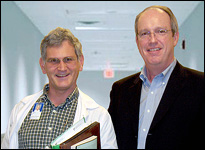 "In a perfect world," Stair explains, "there would always be a bed for each patient." That, however, is not the reality at Brigham and Women's Hospital. "We have little disasters every afternoon when we get an influx of patients and not enough beds to place them in. It's a huge problem," he says.

Since GPS signals can't be received indoors, the architects of the SMART program started looking at RFID technologies for location-tracking. Stair says the SMART project staff considered the RFID patient and asset-tracking indoor positioning systems already deployed at Brigham and Women's and other hospitals, including Massachusetts General. Those systems use tags that transmit ultrahigh-frequency electromagnetic signals read by specialized interrogators or standard Wi-Fi access points.

Instead of selecting an RF UHF system for the ER patient-tracking experiment, Brigham and Women's decided to test an ultrasound system from Sonitor Technologies, based in Hopewell Junction, N.Y. The battery-powered Sonitor tags transmit 20 kHz to 40 kHz acoustic signals to receivers located in the ER waiting area. Through frequency modulation, each tag communicates a unique signal to the receivers, using algorithms to read the signals and then forward their IDs, over the hospital's existing wireless LAN, to a central server. The Sonitor tags are triggered by movement, so only when a tag is moved does it send its signals.

Stair says the group chose an ultrasound patient-tracking system to see how well it would work compared with the hospital’s already RFID indoor positioning system, and in conjunction with the SMART wireless patient monitoring. He notes theoretical concerns that UHF radio signals could interfere with other wireless technologies being used in the hospital, and that the radio frequency signals could suffer from interference caused by metallic objects in close proximity. But Rick Hampton, wireless communications manager of Partners HealthCare System—an integrated health care system, of which Brigham and Women's is a founding member—says that while passive (battery-less) tags do suffer signal interference from metallic objects, the active (battery-powered) RFID tags used for asset and patient tracking in hospital settings do not. Stair also notes that the RFID indoor positioning system the hospital is using for asset tracking, provided by Lawrence, Mass.-based Radianse, neither causes nor suffers from interference with other wireless systems in the hospital.

RFID-based indoor positioning systems from Radianse and other vendors, including AeroScout, Ekahau and PanGo Networks, associate the location of the interrogator or Wi-Fi access point that reads a tag's signal with the location of the tag. The Sonitor system uses the same basic premise to locate its ultrasound tags. Ultrasound signals, however, can't travel through walls, floors and ceilings as easily as UHF radio signals can. For ultrasound systems, Hampton notes, this means a receiver needs to be installed in each room being monitored.


As for an RFID system, because a tag's signal can pass through walls, its location must be pinpointed to a specific room or location. An access point on Floor 2 might pick up a tag located on Floor 1, for example. Thus, to improve the granularity of an RFID system, vendors use algorithms that calculate the distance of the tag from the access point, based on such factors as the amount of time elapsed between the issuance of the signal and its receipt. Moreover, three or more access points can be used to locate a tag through triangulation. By interfacing with a map of the monitored areas, these indoor positioning systems can then direct users to a specific floor and room. The tags and access points can also be tuned so the signals are less likely to bleed through walls or floors.

"The floor-bleed issue used to be a bigger problem before RFID companies' technology improved. But now, the more readers that can see a tag, the more granularity you can get [on its location]," says Mike Braatz, PanGo Network's senior vice president of marketing and business development. 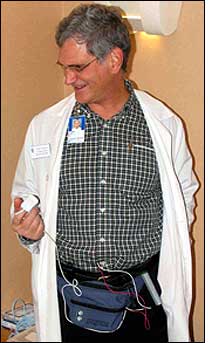 Dr. Stair models the fanny pack while holding an ultrasound tag. Attached on one side, oriented vertically, is a Sonitor RFID tag.

"Ultrasound signals can be heard by our detectors at levels similar to how humans hear voices," says Terry Aasen, Sonitor's president and CEO. Just as voices can't easily be heard between walls or through floors, neither can ultrasound signals. Sonitor receivers have a 100-foot read range and can differentiate between strong and weak ultrasound signals. Therefore, in a large, open area, more than one detector can be installed to determine in which part of the room a person or asset is located—the east side versus the west side, for example—and the same approach would be taken with an RFID system. With either RFID or ultrasound technology, notes Hampton, "the more [location] resolution you want, the more sensors [interrogators/access points] you need."

To link a patient's location with his vital signs, the Sonitor tags are placed inside fanny packs containing a device that monitors heart activity through three leads attached to the chest, and blood-oxygen saturation level through a lead attached to the fingertip. The cardiovascular data is entered into a Hewlett Packard PDA, also inside the fanny pack, that runs a customized Linux-based program written by hospital staff, and transmits the data, along with the patient's ID number, to the hospital's Wi-Fi network. ER staff-members carry PDAs as well, but theirs show both the location and the vital signs of each patient being tracked. When any vital signs go above or below a set range, the staff is sent alerts through the PDA.

"So far, we've tried the equipment on healthy volunteers, and we're about ready to transition to real patients," says Stair. This step will be important because in the volunteer-based testing, not surprisingly, none of the volunteer's vital signs dropped below or exceeded the safe range, so the alerting component of the system has not actually been tested yet. This transition to testing patients will require setting up a means of explaining the technology to them, Stair explains, as well as getting their consent to use the system to track their vital signs and location within the ER's waiting area.

Initially, the hospital plans to use the system only to monitor and track patients suffering from chest pains or shortness of breath. But in the long term, Stair says, it hopes to be able to track the locations of all patients, rather than just those whose vital signs need to be monitored, because locating them quickly—whether in the waiting room or cafeteria, or assigned to a makeshift room or bed in a hallway—will save staff time and improve the speed and quality of care. Stair says he does not believe emergency room patients will object to the use of the location-tracking technology. "I think they will want to be able to be found quickly," he says.