O-ring's newly patented system allows the supplier and its customers to track which components are onsite at any given time, via an RFID tag on each part, as well as readers at the storage area to identify when parts arrive at and leave the area.

May 17, 2017O-ring Sales & Service, a Kansas City-based distributor of o-rings and specialized components, is offering its industrial manufacturer customers an RFID-based solution to manage their inventory at manufacturing sites. ShelfAware is designed to capture data about the receipt and consumption of parts, thereby ensuring that products are automatically reordered as needed, while also helping the manufacturer to understand its inventory levels and reduce them to minimally necessary levels. For manufacturers, the company reports, the technology can mean saving labor related to inventory management, as well as eliminating excess supply purchases, while ShelfAware has boosted O-ring's sales as customers see value in the service.

Thus far, two manufacturers have begun using the solution to manage hundreds of parts. Other distributors are now partnering with O-ring to use the ShelfAware system on their own products. The technology was devised and built in-house, says Andrew Johnson, O-ring's sales and service director, to help customers manage their tools without requiring physical visits from O-ring personnel to count and reorder supplies at customer sites. 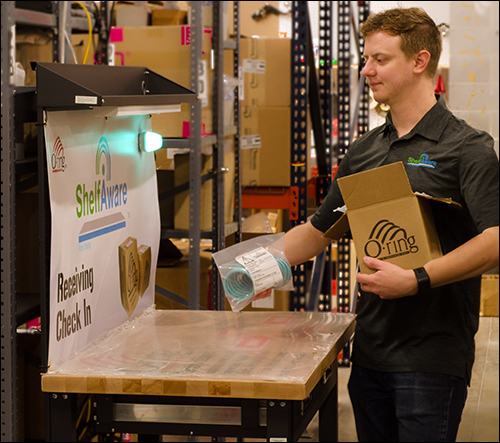 In 2015, Johnson says, he began exploring a system that was easier for customers to use than bar-code scanning, and turned to radio frequency identification. He then tested ultrahigh-frequency (UHF) RFID technology in-house, using a single printer, a reader and tags on products. The company designed its own software to manage the collected data. It filed for a patent, then approached customers with the idea.

In January 2016, manufacturer Eskridge installed the technology at its site where it manufactures gear drives, brakes, diggers and anchor drives. At the time, the Kansas City company purchased approximately 150 stock-keeping units (SKUs) of parts from O-ring. Eskridge has been growing, says Richard Griffin, the firm's senior supply coordinator; during the eight years in which he has held his position, sales have increased from about $15 million to $24 million annually. With the higher volume in assembly, the component orders have also been growing, which puts greater pressure on Griffin to order the parts. Although each is valued at only a few cents, he says, if any go out of stock when assembly is under way, the entire assembly process can be brought to a halt.

In 2016, O-ring installed the ShelfAware system at Eskridge. O-ring personnel tagged all products onsite with Alien Technology Squiggle UHF RFID tags, as well as those being sold to Eskridge. Two kiosks with built-in Zebra Technologies FX7500 readers are deployed—one each at the entrance and exit of the storage area.

When goods are brought into the system, the receiving staff scan each product over the desktop reader kiosk, causing a light built into the kiosk to turn blue with each read. They then put the parts away. When an Eskridge employee retrieves parts, he or she collects what is needed and holds each product above a second reader to indicate it is being removed from the inventory stock. The ShelfAware cloud-based software captures the data, then updates the inventory count for the company. On a weekly basis, based on the RFID data, the company then determines what parts need to be replenished and delivers those parts.

According to Griffin, it took approximately five minutes to train the staff to use the system. "I told them, 'This is the simplest job you will ever do,'" he states. Since they began using it, Griffin adds, it has saved time that previously was spent counting or ordering parts. The company liked the system so much that it increased the purchasing quantity from O-ring to 250 SKUs representing all of its o-rings (gaskets), seals and retaining rings that it uses.

Supplier KR Johnson has also adopted the system to enable customers to track its fittings and hoses at their sites. In addition, Eskridge is now tracking the KR Johnson-supplied products with the same technology. "I see this as a way to provide as rock-solid an understanding of inventory as you can get," says Michael McQueen, KR Johnson's VP. The company now tags all products it sells to Eskridge, which it delivers weekly based on the automated data from ShelfAware.

Now, Griffin says, when Eskridge needs to use or sell a large number of components to customers, it can simply access the cloud-based system and view how many items are on hand at O-ring's main distribution center, as well as how many are on site at Eskridge, and thereby ensure that it can accommodate a large order or spike in product assembly. He says he also employs the system for analytics. "They give me the ability to see how many parts I've used in the last year or the last month," he explains, which helps him to better understand customer demands and assembly trends.

While O-ring has been offering the system as a service for its own products and partner products, ShelfAware is expected to spin off into its own service-providing company.