The airline finds that safety equipment inspections, which previously took hours per plane, can now be accomplished within a few minutes using a UHF RFID solution from EAM Worldwide.

Sep 18, 2017Fiji Airways reports that it has made in-cabin inspections of emergency equipment faster and more efficient across its fleet of 15 airplanes, with the use of radio frequency identification technology. The company installed the RFID system across its 4,000 pieces of emergency equipment this year, and indicates that its inspections can now be accomplished within a matter of minutes aboard a single aircraft.

The system not only makes inspectors' work faster and less error-prone, the airline reports, but also prevents flight delays that could result from delayed emergency equipment checks, according to Marco Andreacchio, the senior project manager of EAM RFID Solutions, a division of EAM Worldwide, the company that provided the technology. The solution consists of tags affixed to emergency equipment, handheld readers to interrogate those tags, and software residing on Fiji Airways' server, provided by EAM Worldwide. In the long run, the airline intends to use the technology not only to make inspections faster and more automatic, but also to collect historic data for analytics purposes. 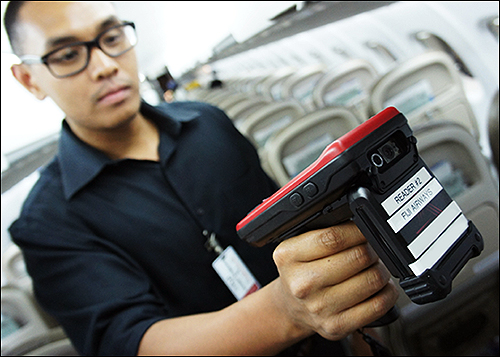 Fiji Airways is an international airline based in Nadi that flies to 10 countries, including the United States. On monthly and weekly intervals, the airline conducts inspections to monitor the presence and condition of in-cabin emergency equipment, as well as any expiration dates. Prior to the RFID system's installation, each inspection ranged from 90 minutes for small aircraft to eight hours for larger planes, in order to ensure that all equipment was in place and in proper working order.

Fiji Airways began investigating in RFID last year as part of its Air Management Oversight System (AMOS) implementation. Mid-year, the airline began working with EAM Worldwide to develop a solution at the RFID company's Dubai office. EAM Worldwide had already been providing Fiji Airways with its RFID-enabled life vests since 2009. 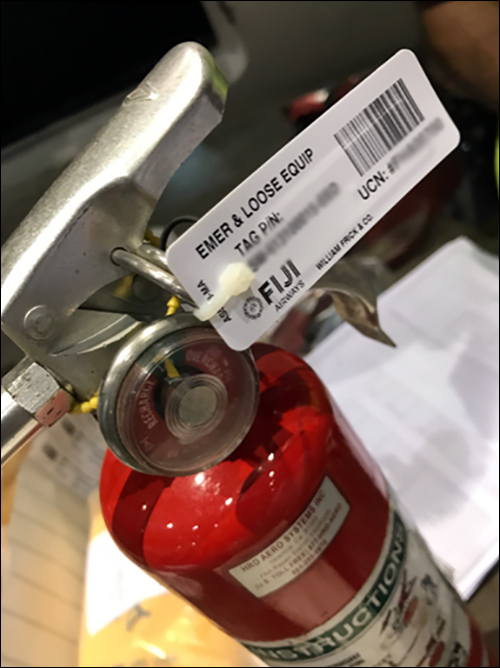 The airline rolled out the technology in January of this year, beginning with a week-long training program for approximately 60 employees, who learned to use the technology on a variety of aircraft. Most of the equipment needed to be tagged. Fiji Airways applied William Frick and Co. ultrahigh-frequency (UHF) RFID tags compliant with the AS5678A specification. Life vests already came with EAM Worldwide tags embedded at the point of manufacture.

The deployment consists of single- and dual-record tags, all compliant with the ATA Spec2000 Ch9-5 standard. Whether on life vests or other equipment, all tags have a unique ID number encoded to them that links to data regarding each item in the EAM Worldwide TagControl software. TagControl consists of a Web portal known as WebApp, as well as DesktopApp and MobileApp to share and manage data from computers and mobile devices. To read the tags, Fiji Airways is employing Alien Technology's UHF RFID handheld readers, using Microsoft's Windows Mobile platform.

As inspectors conduct work aboard an aircraft, they simply open the TagControl App on their reader, then begin their inspection from one end of the cabin to the other. The reader captures tag IDs via RFID and forwards the collected data to the TagControl software via a cellular connection. If the system detects that any item is missing, has expired or requires maintenance, it displays that information for the inspector, while also making it available for management so that the problem can be addressed. 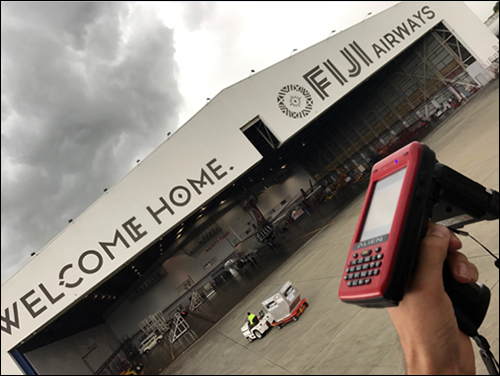 Thus far, the company says it has applied more than 4,000 tags to life rafts, oxygen bottles, generators, extension seat belts, earmuffs, flashlights, fire extinguishers and survival kits. The devices are being tracked on the company's A330, 737, ATR and Twin Otter aircraft.

The next step in Fiji Airways' RFID deployment is to track its seat covers automatically. The airline removes and launders each cover on a regular basis, and RFID technology will enable the firm to gain visibility into when each cover is washed and replaced. "The objective is to track the wash count cycles," Andreacchio says, "and to determine if the correct seat cover is installed in the correct location."

Fiji Airways is also looking into tagging other items in the spare parts environment. In the long term, however, the airline hopes that its suppliers will provide RFID tags on the equipment they sell. "Hopefully, retrofit tagging will be a thing of the past, and aircraft items will increasingly come delivered with an RFID tag on them,"Andreacchio states. EAM Worldwide already delivers life vests that are RFID-enabled, and has been doing so since 2009, for a range of stakeholders including EAM Worldwide, the repair stations and the airlines.