Dec 14, 2017The following are news announcements made during the past week by the following organizations:
Toshiba Electronic Devices & Storage Corp.;
WISeKey International Holding;
Xerafy;
Linexens, KONA I;
Envigo; and
Elatec RFID Systems.

Toshiba Electronic Devices & Storage Corp. has announced a new integrated circuit compliant with Bluetooth Low Energy (BLE) core specification 4.2, including support for secure connection, LE privacy features and extended packet length support. It is available for use in harsh automotive environments and extended temperature ranges. The mixed-signal TC35679IFTG contains both analog RF and baseband digital parts to provide a complete solution in a single, compact and low-profile, 40-pin 6-millimeter by 6-millimeter by 1-millimeter QFN "wettable flank" package, with a pin pitch of 0.5 millimeter.

The TC35679IFTG provides Bluetooth host control interface (HCI) functions alongside low-energy GATT profile functions (as defined by Bluetooth) specifications. The new IC becomes an application processor when used in conjunction with external non-volatile memory, or can be used in combination with an external host processor.

A key feature of the TC35679IFTG is its ability to form part of sophisticated systems as a result of 17 general-purpose input-output (GPIO) lines and multiple communications options. The GPIO lines offer access to a range of on-chip features, including a wake-up interface, a four-channel PWM interface and a six-channel AD converter. On-chip DC-DC converter or LDO circuits adjust the external voltage supply to the required values on chip.

WISeKey International Holding, a cybersecurity and Internet of Things (IoT) company, has announced the launch of WIS.WATCH, a secure mechanical watch powered by contactless secure hardware, designed to offer security and ease of use to cryptocurrency users.

The WIS.WATCH can securely store users' private keys and allow them to make contactless transactions, including bitcoin and other cryptocurrency transactions. WIS.WATCH uses a combination of Near Field Communication (NFC) technology with highly secured solutions provided by WISeKey Semiconductors, and is now accessible through the WISeWallet App. Every time a contactless blockchain transaction is initiated, including a bitcoin transaction, the private key must be first validated using the NFC technology. The transaction is then enabled.

WIS.WATCH is NFC-capable and contactless. It is designed with a secure element that can add a hardware-authentication factor and protect users' credentials and private keys, which are encrypted or decrypted with sophisticated cryptographic techniques. The app is compatible with most existing blockchain technologies and works as part of payment system using WISeKey blockchain-as-a-service (BaaS) technology offerings. The WIS.WATCH can be used as a unique personal key identifier and trusted device to access smartphones, applications, personal data and secured cloud storage.

Secure access functions allow watch owners to unlock WISeID Mobile Application, via a technology designed to protect personal digital assets encrypted on consumer smartphones or tablets, by storing encrypted replicas of them in a secure cloud buried in a Swiss Alps military bunker.

WISeKey provides WIS.WATCH as a consumer product with its own design, and also offers it as licensed technology to different watch brands, by embedding the technology into their watches. Several luxury watch brands are currently using the WIS.WATCH technology with WISeKey cryptographic chips.

Users can register to receive their own copies of WIS.WATCH with a set of promotional offers.

Xerafy, a provider of Gen 2 passive ultrahigh-frequency (UHF) RFID on-metal tags, has announced that it has released its new Micro X II on-metal tag designed to meet the challenges of Industry 4.0 in the automotive industry. The tag can be used to track parts and components across supply chains, as well as work-in-progress (WIP) and paint-shop applications on assembly lines.

The Micro X II Automotive RFID tag allows automakers to meet the requirements of industry standards, such as the German Association of the Automotive Industry (VDA)'s cross-application RFID recommendation, in order to achieve a more agile supply chain and provide real-time monitoring and traceability, as well as customized flexibility. 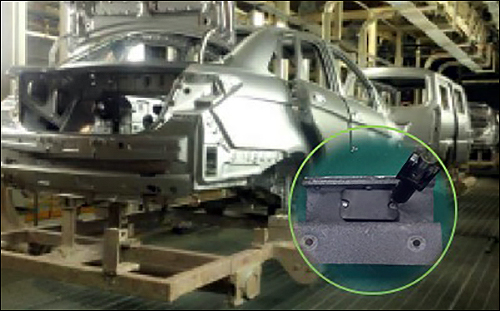 "The ability to reliably track parts through the harsh, complex automotive manufacturing environment has always been a challenge," said Dennis Khoo, Xerafy's CEO and founder, in a prepared statement. "Our Micro X II tag family has already been qualified as the leading on-metal RFID tag for these applications by manufacturers like Volvo, Daimler, and Toyota. With the addition of the Micro X II Automotive tag, automotive suppliers and manufacturers will have access to a robust and reliable RFID tag that can provide real-time visibility throughout their manufacturing operations and the supply chain."

The tags feature higher memory than previous generations of the Micro X II family, the company reports, allowing data to be stored and associated with the parts to which they are attached, rather than on the server. This allows flexibility and traceability throughout the manufacturing process, during which automotive parts may be produced and assembled in different plants. The tags are available with more durable casing material and larger mounting holes, the firm indicates, to facilitate fast rivet attachment options.

The RFID tags can be used for applications in temperatures ranging from -40 degrees to +482 degrees Fahrenheit (-40 degrees to +250 degrees Celsius). They provide a read range on metal of up to 23 feet (7 meters), with an IP-68 ruggedization rating. Xerafy also offers personalization options, including tag programming, customized laser engraving and a metal insert option for some applications.

"Manufacturers are transitioning to the networked, real-time capabilities of Industry 4.0," Khoo said in the prepared statement. "With our new Micro X II Automotive tags, Xerafy helps automotive companies prepare for this transition by enabling the digitization of complex supply chain and manufacturing processes."

Tag samples are already being tested by customers in the automotive industry. According to the company, shipping is expected to begin by the end of the fourth quarter of 2017.

KONA I, a provider of smart cards and payment solutions, and Linxens, a designer and manufacturer of microconnectors for smart cards and RFID antennas and inlays, have signed a strategic cooperation agreement. Through the agreement, the two companies hope to respond to the growing smart-card and secure-identity markets.

KONA I provides both contact and contactless technologies for its customers in a number of market segments. These include telecommunications, transport, e-government, access control, hospitality, leisure and entertainment, financial services, the Internet of Things and health care.

"We are delighted to collaborate with Linxens, a renowned security expert in the global market," said Cho Jung-il, KONA I's CEO, in a prepared statement. "By taking this opportunity, both companies will work together to show better products and services that can be recognized in the global market."

"Our companies already have a successful history of working together on several projects," said Christophe Duverne, Linxens' president and CEO, in the prepared statement. "We are confident this partnership leverages both companies' strengths and will open up new opportunities for both of us."

Envigo, a provider of nonclinical contract research services and research models, has announced the implementation of a surgical model tracking system designed to enable critically required efficiencies while enhancing animal welfare. The system, which tracks both animals and surgeons, works by implanting RFID microchips in each surgically modified animal model, allowing Envigo to record real-time, accurate data on animals in surgery.

This system includes proper surgical information regarding animals' weights and dates of birth; surgical preparation; catheters and implants; analgesics and anaesthetics; length of surgery; post-operative care and recovery; and inventory and shipments. The major benefits for researchers, the company reports, are a reduction of the number of rodents used in research and improvements in surgery and study accuracy.

The technology is designed to limit human error by permanently identifying each rodent's status through all stages of the surgical process, and to provide Envigo with better access to inventory, effective metrics on particular aspects of surgical procedures, and a mechanism for ensuring that the right medications are taken at the proper time. Additionally, the system adds an extra layer of quality assurance, meaning customers can be sure the correct model has been supplied for surgical procedures. By creating a digital repository, the system streamlines the regulatory compliance challenges of existing electronic documentation approaches, including failure to compile required data.

"The innovative tracking system is the first software tracking system to be introduced into the surgical space," said Brad Gien, Envigo's head of surgery for North America, in a prepared statement. "The initiative forms part of our company's commitment to the '3Rs' strategy of animal testing—refine, reduce and replace. The technology refines surgical outcomes and animal health. In terms of efficiencies, our own studies have shown that the system is estimated to reduce the number of animals required for surgery and inventory."

The number of interfaces has been increased in comparison to the company's previous models. In terms of USB and RS232, the PCB now features 5V TTL, I2C, Wiegand, clock/data and four GPIOs. The new TWN4 MultiTech 2 supports CCID and PC/SC 2.01 operating modes. The readers are available as a PCB measuring 76 millimeters by 49 millimeters by 9 millimeters, or pre-installed in a desktop reader housing.

A special feature, which reduces configuration effort in large projects, is the centralized reconfiguration of the readers via the network. As such, previously integrated devices do not need to be individually disassembled and reassembled following the conversion.

The TWN4 MultiTech 2 HF can be reconfigured via the air interface using a contactless configuration card (TWN4 CONFIG card) only. When it comes to the two new reading modules, Elatec facilitates the sale of solutions implemented with them. The RFID readers come equipped with all essential country approvals, the company adds, and can thus be sold and used worldwide.