Impinj has announced the first solutions in its retail portfolio, built in collaboration with partners Detego, Nedap and InMotion. Based on the Impinj platform, the end-to-end solutions are designed to help retailers improve store operations, the customer experience and sales.

Impinj is offering the Retail Inventory Intelligence and Supply Chain Management solution (developed with Detego), the Always-On Retail Inventory Intelligence solution (developed with Nedap), and the Interactive, Digital Product Displays for Retail Stores and Consumer Brands solution (developed with InMotion). All three solutions are built on the Impinj platform, which leverages RAIN RFID and comprises endpoints (tag chips that uniquely identify items), connectivity (readers and gateways that wirelessly identify the items) and software. Impinj says it plans to continue adding solutions to its retail portfolio, as well as introduce portfolios for other industries.

The Impinj-Nedap solution is designed to continuously count and reconcile store inventory levels. The Impinj platform and Nedap !D Cloud application work together to provide retailers with around-the-clock inventory updates that can be reconciled with existing enterprise resource planning (ERP) systems. The solution is simple to use, leverages cloud-based software and can help increase store sales with improved inventory visibility, lower labor costs and operational inefficiencies from manual cycle counts and undirected replenishment. The system can also eliminate the excess inventory that stores traditionally employ to compensate for inaccurate inventory visibility, according to Impinj.

SML Intelligent Inventory Solutions (IIS) has announced the release of its Clarity 3.X software, the latest version of the company's cloud-based software suite designed to ease RFID deployment in order to enable the real-time management of inventory across the global retail channel.

The software suite provides retailers with visibility into stock availability to help reduce out-of-stocks, audit product shipments and deliveries, and report on stock-counting variance, the company reports, as well as help retailers improve omnichannel execution at each store.

The new version is completely cloud-based, running as a private cloud or behind the retailer's firewall, so it does not require any servers running at the retailer's site, according to Dean Frew, SML Group's chief technology officer and senior VP of RFID solutions. Clarity 3.X is also more scalable, he says. "We built the platform on an event-triggered architecture to make it the most scalable architecture in the market," Frew states. As an example, retailers with 1,000 stores can perform a stock count and replenishment simultaneously, without any performance issues and with a high-level user experience.

This latest version also features a new omnichannel functionality designed to connect distribution facilities and stores, and an Intelligent Inventory Replenishment feature, allowing autonomous fixed readers to accurately capture items being received into stockrooms, as well as trigger alerts regarding sold merchandise, so that the affected stock can be transitioned to the sales floor. There is also a new user interface with a Web dashboard that enables store personnel to quickly assess the potential cost of an out-of-stock situation. Generic Integration "connectors" built for numerous types of retailer enterprise systems are also now available with Clarity 3.X, Frew says.

Vizinex RFID, a manufacturer of RFID tags tailored to specific applications, has launched a new ultrahigh-frequency (UHF) RFID on-metal tag, known as the Sentry Slim Skinnie. The tag measures 36.3 millimeters by 6.9 millimeters by 2.8 millimeters (1.4 inches by 0.3 inch by 0.1 inch), and weighs 1.5 grams (0.05 ounce). It supports a 6- to 10-foot read distance, depending on the item being tagged, the company reports, and its low profile also makes it suitable for tracking small tools, slim IT assets, weapons, laboratory equipment and work-in-process. It is designed for mounting on metal surfaces by means of a high-performance acrylic adhesive for attachment, Vizinex says. 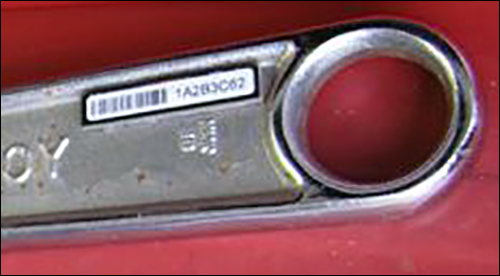 The Sentry Slim Skinnie tag, mounted on a wrench

The Slim Skinnie is much less expensive than the ceramic tags often used in these applications, says Ken Horton, Vizinex's CEO. The Slim Skinnie can be upgraded for high-temperature service, he adds, such as for use in autoclaves or paint-drying booths.

Management MEPS Real-Time, a provider of RFID solutions for pharmacy automation and inventory management, has released a new version of its Intelliguard Kit and Tray Management System that has updated RFID antenna that, according to the company, reduces scan times by 50 percent compared with those of previous versions.

In addition to reduced scan time, the Intelliguard Kit and Tray Management System Version 4.0 includes foundational improvements, enhanced data retrieval, specific customer-requested features and incremental changes to improve workflows. For example, the company explains, it supports the ability to upgrade the Medi-Span database to allow global, concurrent updating when new medications are made available from Medi-Span, while still allowing individual customers to add custom medications. The new version also enables pop-up alerts for soon-to-expire medications, the company says. Other features include improvements to the raw data export functionality for the inventory reports, as well as upgraded navigation to better support search results within help screens.

Additionally, the DSM technology supports a variety of Intelliguard Kit and Tray Management System Workstation sizes, with compact footprints that, according to the company, can create more usable space within a pharmacy. Developed to foster an ergonomic workflow, Intelliguard workstations include design details like flexible mounting and placement options, integrated work surfaces, all-in-one computers and a touch-screen user interface that, MEPS says, increase comfort levels while reducing the risk of repetitive stress injuries for employees.

Powershelf, a provider of retail technology solutions, has announced that its out-of-stock sensors will be the focus of a new food-industry pilot program, known as the Out-of-Stock Inventory Management test, measuring possible solutions to grocery out-of-stocks (OOS). The program is led by a joint task force consisting of Giant Eagle, one of the nation's largest food retailers and distributors, the Food Marketing Institute (FMI), the University of Maryland, Ernst & Young, dozens of leading product manufacturers, and Powershelf. The program, scheduled to run from this month through January 2016, will measure the effectiveness of Powershelf out-of-stock sensors in four Giant Eagle stores in the area of Columbus, Ohio, the company indicates. 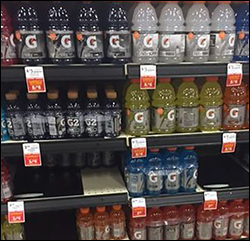 Powershelf sensors installed in the sports-drinks section of a Giant Eagle store in Columbus, Ohio

The Powershelf solution was co-developed by Compass Marketing's Tagnetics subsidiary, and by Panasonic System Communications Co. (see Panasonic Adds Bluetooth Beacons to Electronic Shelf Labels). The solution enables retailers to connect their customers with location-based content via a mobile app, and is intended to enable stores to electronically update prices on LCD screens mounted on product shelves, as well as receive automatic notifications in the event that a shelf becomes empty, thereby indicating a product needs to be restocked to ensure that not sales are missed.

The Out-of-Stock Inventory Management test focuses on the individual store level, at which industry studies have shown nearly three-quarters of all out-of-stocks occur, according to Powershelf. The Giant Eagle stores participating in this pilot will be divided into two groups—control and test stores—both of which will be outfitted with Powershelf OOS sensors. The sensors will measure on-shelf availability in the yogurt, sports drinks, beer and diapers categories, with leading manufacturers representing their interest as participants. The sensors use the two-way communications capabilities to alert store personnel and distributor partners to remedy the situation. However, only the sensors in the test stores will issue alerts when products go out of stock. Other data collected from the test includes response times to address the OOS alerts, and estimated loss of sales for both non-promoted and promoted participating stock-keeping units (SKUs).

The results of the Columbus pilot program are expected to be released early in the first quarter of 2016.

According to Sensoro, traffic at these beacon-outfitted locations reached hundreds of millions during the Chinese holidays. For example, an estimated 12 million travelers visited 40 Class 5A tourist attractions, the highest level of tourist attraction rating category rated by the China National Tourism Administration (CNTA). In May 2015, in cooperation with China's CCTV News Channel and the CNTA, Sensoro deployed more than 4,200 beacons at the 40 attractions, and the technology enabled interaction between CCTV and tourists at the attractions, who uploaded more than 60,000 real-time news clues. During the 2015 Chinese New Year, CTF's use of beacons brought in $11 million in revenue with a conversion rate up to 63 percent—far surpassing expectations, Sensoro says. The success of the case persuaded CTF to deploy beacons at all 2,100 of its Mainland China retail stores during the next three months.

According to Sensoro, several other brands have chosen to partner with the company to launch digital marketing activities. These include professional soccer club Real Madrid, the restaurant group Yum!, and Sony Pictures Television.