The Speedway Revolution automatically adjusts to external conditions, such as RFID tag density or the presence of metallic objects, enabling improved performance and easier installation.

Aug 11, 2009RFID technology provider Impinj is selling a new ultrahigh-frequency (UHF) EPC Gen 2 RFID interrogator, known as the Speedway Revolution. This new reader will automatically configure itself to adjust to external conditions, such as changes in RFID tag density or the nearby presence of metallic objects.

This autopilot function, according to the company, allows Revolution users to install the reader more easily (since it does not require manual configuration) and operate the device without a fluctuation in effectiveness caused by environmental factors that can negatively affect some readers. What's more, the device need not be manually reconfigured when that environment changes. Available this week in North America, the Speedway Revolution is slated to be released in Europe and Brazil in October 2009, and in other regions, including Asia, in the first half of 2010. Impinj sells UHF Gen 2 hardware to distributors worldwide. 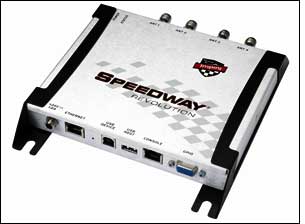 Traditionally, reader users face several challenges based on the inflexibility of RFID interrogator platforms. For one thing, high levels of RF noise, static or the presence of metal can affect the quality of RFID reads. Although interrogators can be configured to take environmental factors into account, those conditions sometimes change.

When a metallic forklift passes an antenna, for example, the metal's reflective nature can temporarily interfere with read quality. In addition, the presence of a large quantity of tags—such as hundreds of item-level tags passing an antenna—can affect read rate. And if a tall stack of pallets passes antennas in a portal, followed by a short stack of pallets, all of the portal's antennas, both high and low, will continue to transmit an RF signal at the same rate, whether or not there are tags present in their vicinity. This can cause excess power usage, as well as send out unnecessary RF noise for other readers in the area. The Revolution constantly samples low-level RF data (such as RF noise), and uses its patented algorithms to adjust operations according to changes, says Impinj's marketing VP, Kerry Krause.

The Speedway Revolution is offered in two versions: the R420 with four monostatic antenna ports, and the R220 with two monostatic antenna ports (with a monostatic system, each antenna can both transmit and receive signals). The R420 and the R220 address the same environmental challenges, Krause says, noting that Revolution readers are 80 percent smaller, cost $400 to $600 less and have 10 percent greater read quality than their predecessor, known simply as the Speedway.

The function that sets the Revolution apart from other readers on the market, Krause says, is its autopilot feature. On autopilot, he explains, an interrogator can adjust to changing RF environments by sensing RF environmental noise and interference, then responding to that external environment by adjusting its RF signal accordingly (such as increasing its read sensitivity when necessary). The Revolution also has a low duty cycle, meaning it stops transmitting an RF signal if it does not detect any tags in its vicinity. In this way, the device not only saves power, but also reduces RF noise for other readers that might be in the area. The interrogator pings out a signal periodically to check if any RFID tags come within range, resuming full power if it receives a response.

In addition, the Revolution comes with a carrier-cancellation feature that can be used to compensate for a strong reflector signal. A metallic forklift parked temporarily in front of an antenna, for instance, could bounce the RF signal back to that antenna. In such a scenario, the interrogator's transmission could be reflected back toward its antennas, thus making it difficult to read the much weaker signal coming from a tag. A powerful reflector signal can even damage some interrogators if they are not designed to receive it. To counter this, the Revolution can squelch a reflector signal by creating an RF wave identical in strength but 180 degrees out of phase, similar to a mirror image.

All of the Revolution's patented features are, in large part, enabled by firmware controlling the interrogator's core radio, with algorithms within the system taking information from RFID reads and making adjustments according to the various external factors. Hardware components also contribute to the carrier-cancellation feature, Krause says.

The new interrogator will be easier to install and set up, Krause claims, because it will accomplish its own configuration based on the environment. "The goal," he says, "is to make it easier to take it out of the box and get it running."

Speedway Revolution, which measures 6.75 inches by 5.5 inches by 1 inch in height, can also be powered with an Ethernet cable in Power-over-Ethernet (PoE) mode, meaning the installation of power lines is not required for each interrogator. The four-port version costs $1,585, while the two-port model costs $1,385. By comparison, the previous reader, the Speedway, costs $1,985.