The latest version of the company's LRU1002 reader enables users to interface RFID directly with an existing access-control system without requiring an external power supply, and to clone reader configurations using a USB stick.

Apr 10, 2017With a growing number of gated communities, warehouses and commercial parking areas tracking vehicles via UHF RFID technology, Feig Electronics has released a new version of the lowest-cost iteration of its Long Range Readers designed to be more functional than its predecessor. The updated LRU1002 Long Range Reader is built to accommodate simpler installations, the company reports, by adding cloning capabilities between readers and including a Wiegand interface and switch to allow use with an existing electronic access-control panel.

The updated LRU1002 reader is aimed at a growing market in access control in which UHF RFID technology is being used to manage the gates at residential communities and commercial parking lots. 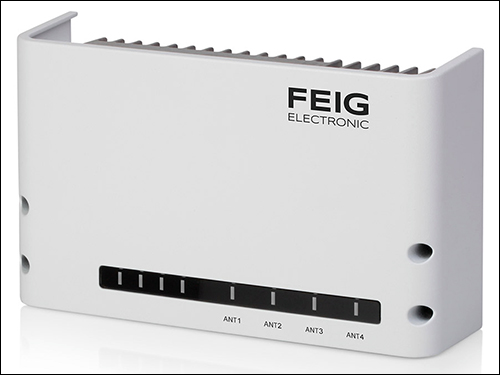 As passive UHF RFID readers are extending their range, and as tag costs are dropping, companies and communities are increasingly installing the technology to enable access control for authorized vehicles. The newest version of Feig's UHF Long Range Reader is a response to the growing need of these customers for a UHF RFID access-control system that is easy to install and operate, says Michael Hrabina, Feig Electronics' executive VP.

Access-control systems with HID access cards, or manned staff, can be slower and more cumbersome to operate than UHF RFID, while active RFID systems, such as the ones used for highway tolling systems, tend to be too expensive to install in most gated areas.

The latest version of the LRU1002 is aimed at allowing companies to launch RFID where it hasn't been convenient in the past. It has a range of up to 40 feet (12 meters) and is designed for parking areas, warehouses (to manage forklifts or other logistics traffic), laundry services and waste management.

The system requires only a passive UHF RFID label affixed to a vehicle's windshield or hung from a rear-view mirror, and the reader and antenna installed at entrances and exits to identify an individual entering or leaving a gated area. This provides them with the capacity to simply slow down and drive through an automated gate, while the software collects data about the vehicles' movements.

The Easy Configuration Cloning function allows users to configure one reader, then store those configurations on a USB stick, and take it to each additional reader to configure them the same way. That function makes it easy to set up a facility with multiple entrances and exits or zones in which they must monitor traffic. The reader has four antenna ports and supports an external UHF multiplexer. The new reader provides DC power and sends channel-select and transponder commands to an eight-channel UHF multiplexer via a single cable, so that no external power supply or cabling is needed.

With the Wiegand interface, the reader can be plugged directly into an existing access-control system, using a single interface, so that the entire existing system toned not be replaced to accommodate UHF technology. "So if you have a system that's been in use [such as a card swipe system], you now can simply add RFID to that existing access-control system," Hrabina says. The new reader's optional Wiegand switch also enables companies to set up an entrance and exit gate operated by a single reader.

The long-range reader uses NXP Semiconductors' Ucode DNA chip to bring security options to access control as well. Users input an Advanced Encryption Standard (AES) 128-bit key in the reader that matches the key programmed in each tag. Only transponders with a matching key can activate the gate. That key could be stored in the reader itself or in the hosting access-control panel. In that way, users can ensure no unauthorized person uses a cloned tag to access a secure area. In addition, a new LED light provides visual diagnostics to indicate a read has been accomplished.

"I think the biggest thing is that it's bringing security to UHF," Hrabina says, via the AES encryption key feature, which was also available in the previous versions of the LRU1002. "For military applications, this is going to be significant," he states. However, the earliest adopters of the LRU1002 are commercial companies, such as office buildings with secure parking areas, and communities that control the flow of vehicles.

The new version of the LRU1002 is priced the same as its predecessor. Feig has scheduled a webinar on Apr. 27 to provide more information about the LRU1002, and to share the results of a UHF long-range reader comparison. Klaus Schoeke, Feig's technical sales and support VP, will present the findings between the LRU1002 Long Range UHF Reader and other readers.