Escort Memory Systems now sells a shorter version of its 6-foot-tall LRP2000-26 reader-antenna, offering the same performance at half the height

Mar 18, 2004The latest product in RFID scanning is a half-high version of the Escort Memory Systems (EMS) RFID tag reader/writer, that offers a miniature version of the LRP2000-26. The new LRP2000-23, which measures 3.5 feet in height, includes a compact design and shortened antenna for scanning RFID tags. The shorter antenna allows for the same multitag reading at 13.56 MHz as its predecessor, but is more mobile, compact and less expensive for customers whose tags never exceed a height of around 3 feet. 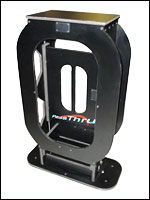 The half-high version resulted from customer requests for a smaller version of the LRP2000-26. Customers requested the smaller version after finding the full-size model consumed more warehouse space than they needed because of they used only lower-stacked pallets. The smaller LRP2000-23 is also more mobile. Like the larger model, the LRP2000-23 includes two antennas and two readers that can be deployed to create an 8-foot-wide aisle to accommodate pallets passing through.

EMS’s RFID systems are in use by automotive and pharmaceutical manufacturers (to name a few) as well as shipping companies, such as DHL and Seagate, for container tracking. The EMS “PassThru” system can read multiple tags as they pass the antenna, including tags that are obstructed by other boxes. Using 13.56 MHz, the system can read tags through water-based products, including meat, at an accuracy of up to 99 percent, something that UHF systems cannot accomplish because water absorbs UHF radio wave, reducing read accuracy.

The LRP2000-23 and LRP2000-36 readers can scan hundreds of RFID tags at once, as a pallet passes the PassThru System, including tags on the inside of a stack of boxes, according to Suresh Palliparambil, director of marketing at EMS, which is based in Scotts Valley, Calif. The EMS System’s strength lies in accuracy of tag reading, as the device is designed to read all tags on a pallet, whether through boxes or dock doors.

“It’s a matter of speed versus accuracy,” says Palliparambil.

Neither the half-height LRP2000-23 nor its full-height counterpart, however, will work with the UHF (915 MHz) tags required by Wal-Mart, which has mandated that its top suppliers put UHF RFID tags carrying Electronic Product Codes (EPCs) on products beginning in January 2005. Instead, EMS’s readers are designed for use when accuracy of scanning is the primary concern. The readers are ISO15693 compliant and can read high-frequency (13.56 MHz) EPC tags.

“The good thing about the Wal-Mart Initiative is it got everyone thinking about RFID,” Palliparambil says. On the other hand, although some Wal-Mart suppliers have expressed an interest in the 13.56 MHz readers, at this point they would need to have UHF tags and readers to comply with the Wal-Mart mandate.

The and LRP2000-36 readers are in use in Europe and Asia as well as the United States, taking advantage of the already existing ISO15693 open standard. Most recently, EMS readers were used in the Chipping of Goods Initiative (CHIEFS 2), a cooperative program with express delivery service provider DHL, cell phone maker Nokia and the U.K. government’s Home Office to reduce the threat of cargo theft in the United Kingdom.