Jul 23, 2015Digi International has sold wired and wireless communication solutions to cities since the 1980s, but during the past five years, the company has been offering what it calls its Smart City Initiative, focused on wireless IoT solutions to manage sensor-derived data regarding a community's infrastructure. The initiative consists of wireless sensor technology and software that a handful of solution providers, such as Owlet, integrate into intelligent digital street-lighting systems. This year, San Jose, Calif., has installed Owlet's network, using Digi technology, on 18,000 sensor-based street lamps located throughout the city.

Digi's Smart City solutions were conceived, developed and deployed independently. However, says Jeff Liebl, Digi's CMO, they collectively fell into a smart-city category that the company found interesting. "It's been more of an organic collection of activities," he states, "and the enthusiasm around them has led to making cities smarter." The company, therefore, is making sensor-based technology that is suited for one or more applications that could be managed via Digi software. Systems initially deployed for a single function, such as street lighting, could be expanded to other applications on the same network. 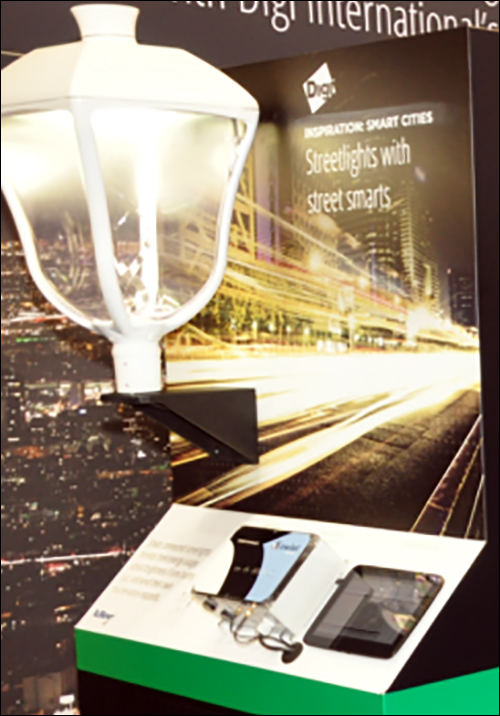 Digi International has been conducting business for three decades, Liebl says, connecting the physical world with the Internet. But it has only recently been working wireless products into its offerings, starting with its Connect WAN cellular routers in 2004, followed by its Wi-Fi sensor-based Connect Wi-Me system the same year.

Since those early projects, Liebl says, "We've worked with connecting city services and systems for over a decade, with products such as our cellular routers for emergency vehicle and public transit communications systems." The company makes Digi Connect N2S-170 Ethernet network connectors for traffic-control systems, as well as custom wireless design solutions for parking meters and XBee wireless modules, which are now embedded in a wide variety of wireless sensors throughout some cities.

Since the smart street-lighting solution was installed in San Jose, Digi has been in conversations with other end users as well. Liebl estimates that 40 percent of a city's energy bill is based on street lighting, one of the most expensive parts of its infrastructure. If intelligence could be built into the lighting via sensors, Digi presumed, the lighting could be adjusted as needed, based on the conditions around each lamp. The company began working with Owlet in approximately 2006 and created its first product design in 2009. Owlet was acquired by Schréder in 2011, two years into the project.

The solution consists of LED lights wired to Digi's S2C XBee sensors that create a wireless mesh network based on the ZigBee 802.15.4 protocol. S2C XBee sensors include light sensors and an onboard microcontroller to control the dimming and switching of the light. "The board connects to LED ballast that does the actual switching," Liebl explains.

Each light fixture's ballast employs Digital Addressable Lighting Interface (DALI), a lighting industry standard protocol, to control the light. Thus, the main task of the additional microcontroller on the board is to translate commands coming from Digi's S2C XBee ZigBee sensor into the DALI protocol. The XBee sensors also use an external antenna, which extends the transmission range to hundreds of meters; however, the street-lighting application does not require that distance.

The XBee sensor modules and lighting-control systems attach to the light at the top of each pole, or inside a cabinet beside the road.

Streetlights measure the lighting level within their own vicinity and forward that information via ZigBee to XBee units, and the data ultimately reaches an operations center via a cellular-linked gateway device. The XBee sensors communicate with the Digi CPX4 gateway unit, which can control up to 140 XBee units (and, therefore, light poles). These poles are typically placed 25 or 50 meters (82 or 164 feet) apart. The gateways are either pole-mounted or installed in network cabinets at ground level.

The system enables users to accomplish two things: They can remotely adjust output from lights based on sensor readings, or simply identify when lights have gone out and send personnel to replace or repair them. This saves time that employees previously spent manually checking lamp functionality on streets throughout the city, or waiting for reports from residents. If the system detects that one light has gone out, the neighboring lights could be set to a higher level until that lamp is repaired.

In San Jose, approximately 18,000 XBee nodes have been installed to date. That process required about six months for four to eight city staff members to install the new LED lights. The system was taken live this year.

However, Liebl says, street lamps are only the beginning. "Street lighting is a popular place to start," he notes, though he envisions cities adopting multiple smart-city applications related to transportation, safety or city services, all of which could be connected via a single ZigBee network, with Digi software managing all of the collected data.

Municipalities are also using Digi technology for such applications as monitoring trash-compactor systems to identify when the devices are full and need to be emptied. Bigbelly's solar-powered trash compactors include Digi sensors.

Each installation is a custom process, Liebl says. "Challenging physical environments must be overcome, including mountainous terrain, extreme temperatures and weather patterns, and long distances," he adds. "Noisy RF environments also present challenges due to interference and data loss."