Injectable UHF RFID Tags to Be Tested in Fish

Omni-ID, RFID Solutions and the Institute of Marine Research have developed a passive glass tag that can be inserted into young fish so they can be identified after being caught at sea, then be tracked as they move in chutes or on conveyors.

Jul 27, 2022RFID innovation is forging into increasingly challenging environments to help industries benefit from automatically identifying objects. One such innovation is taking place underwater, with the tracking of fish as small as herring as they are caught in the wild, then are transported and processed in bulk operations.

Omni-ID has developed an injectable UHF RFID tag for fish that enables them to be individually tracked after they are caught by commercial fishermen. This can be accomplished whether the animals are in underwater fish cages or as they move through underwater chutes or on conveyor belts at processing plants before being transported to stores. The tags would be removed before the meat is packaged for consumers.

The specialized UHF tags are being developed as an alternative to the low-frequency (LF) RFID tags used to track fish, in an effort to improve tag read reliability and range, and to lower the cost of tracking individual fish. The project is led by Norwegian technology company RFID Solutions AS for Norway's Institute of Marine Research (IMR). The next phase, set for November of this year, will be to inject the tags into farmed fish so they can be tracked in the North Sea throughout the winter season. 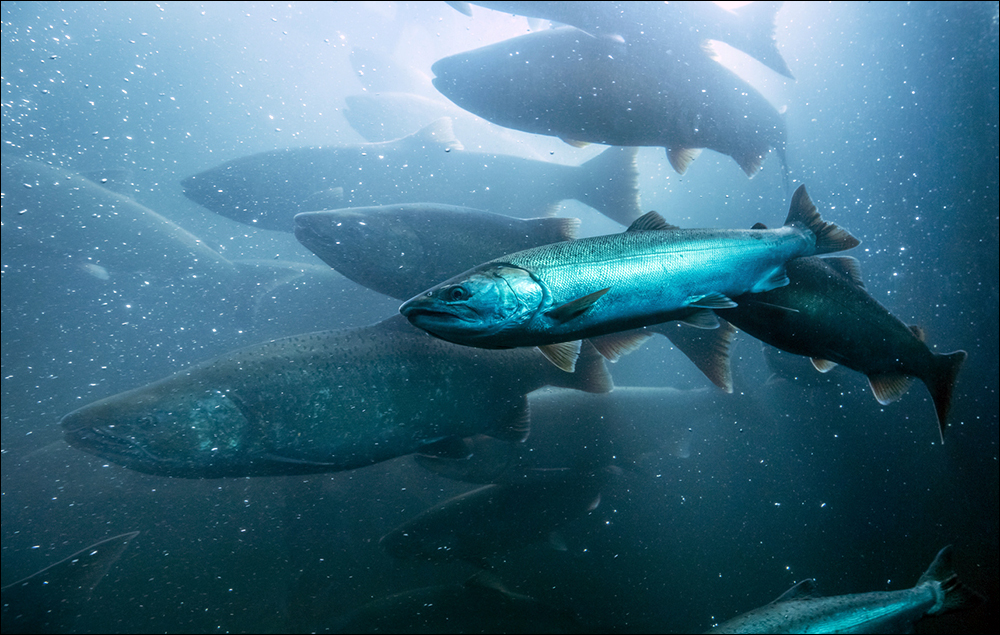 IMR has been using technology to monitor marine fish stocks for decades, and it uses tag-recapture methods to help commercial and conservation interests understand details about fish and their movements. In 2021, IMR, RFID Solutions and Omni-ID were awarded Eurostars/Innovate funding as a three-way consortium to develop the UHF tag and reader system to count multiple fish simultaneously.

The goal of deploying UHF is to help the fish industry achieve faster tag read speeds, the consortium members explain, using an anti-collision algorithm that enables large numbers of tags to be read at once. The consortium hopes to boost the efficiency and accuracy of fish stock data capture, and to help users better understand fish migration and behavior, according to Tony Kington, Omni-ID's CEO.

Typically, the three types of fish being tracked—salmon, mackerel and herring—are grown to adult size in a farmed environment, then are released into the wild, where some are later caught by commercial fisherman. By tagging the fish, the industry can monitor the percentage of farmed fish that are caught in the wild.

Omni-ID has experience with fish tracking, but not on an individual level. With tech partner Aucxis, for instance, the firm has been providing UHF RFID tags used on containers of fish for Vlaamse Visveiling, a company that conducts fish auctions in the Zeebrugge and Oostende fishing ports. Omni-ID has supplied Auxcis with thousands of its EXO 800P rigid tags, to be attached to crates. These ruggedized, low-profile, medium-range tags operate at temperatures from -20 to +85 degrees Celsius, and they come with embedded Alien Technology Higgs 3 chips or Impinj's Monza M700 or M730 chips.

The crates can be read as they move through the supply chain, including during purchasing at auction and shipment to customers. Omni-ID used its experience designing tags that can be read in this challenging environment to build a new tag that could be injected subcutaneously, using existing LF implanter equipment, with the tag size ranging from 15 to 25 millimeters in length and 5 millimeters in diameter. 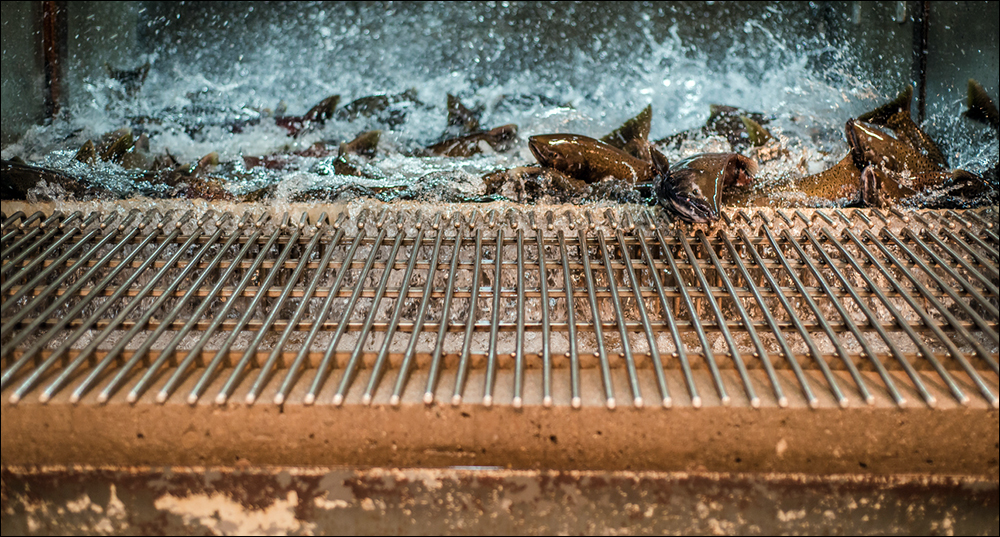 Live chinook salmon at a fish hatchery, flopping and splashing on a metal grid, being transferred out of the main holding tank for spawning

The UHF tags needed to provide a read distance of 5 to 10 centimeters in distance underwater, and up to 2 meters outside of water. Additionally, the tags required rounded edges to avoid injuring the fish when they are applied. The tiny tags had to be blue in color so they could be clearly identifiable when caught fish are processed for consumption. Omni-ID developed two form factors of UHF tags as a result: one that is 15 millimeters long and another that is 25 millimeters long, both 3 millimeters wide. The shorter tag can accomplish a 1-meter read range, the second 2 meters.

Each tag is attached underneath the skin in the belly of the fish, Kington says. A worker would hold a fish upright and use an injection device to insert it. The young fish would then continue to grow in the farm, be released, and in some cases later be caught by fishermen in the open ocean. The tags can be read while the fish is still alive, as long as it is trapped in an underwater cage. The tag is designed to be interrogated fast by a reader in the cage. Fish that have been caught (which are no longer alive) are transported in two ways: through a pipe with water, or on a conveyor during processing. 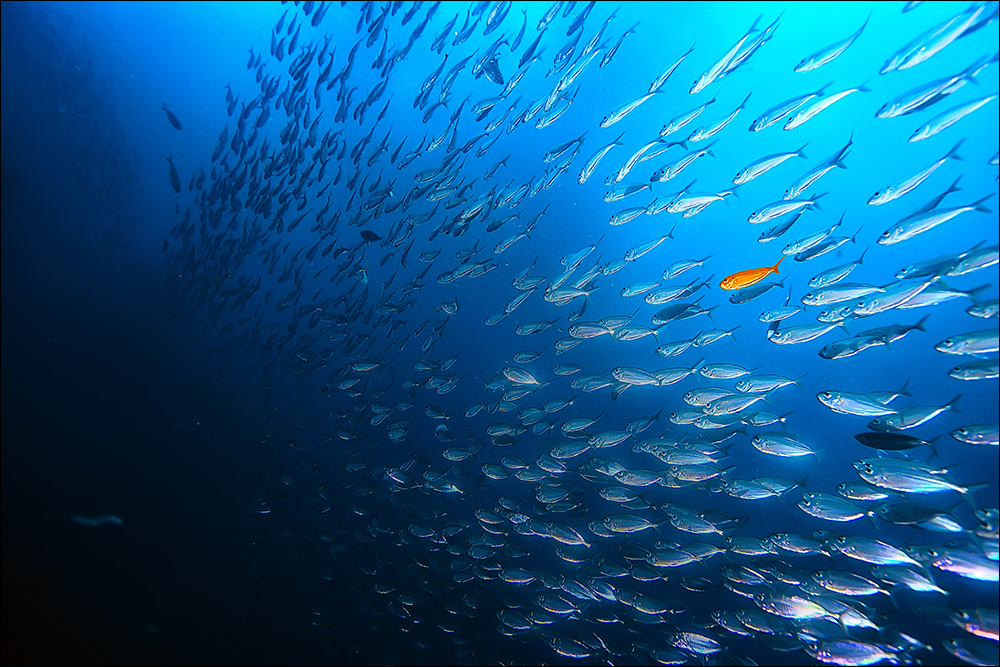 Offering an Alternative to LF Tags 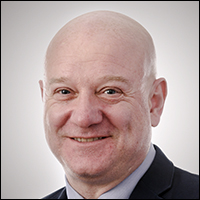 While LF tags have already been used for the tracking of such fish, the consortium members indicate, the LF transmission was not always effective and the tags were relatively high in cost. LF has a short read range, meaning the fish would need to be very close to the reader, while large numbers of fish often pass the readers at high speed, making reading difficult. "This is important for tracking thousands of fish that are darting back and forth in front of the reader," Kington states. LF can also be susceptible to the low-frequency motor electrostatic noise that is present at processing plants.

UHF is more reliable for data capture since it is less susceptible to ambient RF noise and can be read at a distance. Therefore, the project is intended as a demonstration of whether UHF can provide an alternative that is a lower in cost than LF, as well as more effective. However, UHF poses its own challenges in this environment. LF typically performs better around water than UHF, and building a UHF tag with an antenna that is extremely small would require special engineering. Omni-ID thus had to develop a tag with an antenna measuring about 0.1 inch by 0.6 inch. The tag leverages a glass encasement for its own antenna and chip design.

The goal is to make the tag as durable and effective as possible, Kington explains, as well as injectable and bio-safe. "I think the antenna design is truly novel if you think about that very small form factor," he says. Omni-ID's engineers used the company's existing RF modeling software to design the tag, testing both ceramic and plastic inlays. They selected plastic for its relatively lower cost, and they built the antenna to produce the required impedance, focusing on the properties of skin and water. "We put all those details into the model to provide an efficient antenna inside a fish and inside water, even if the fish is moving," Kington says.

More Use Cases for Injectable Tags

There may be numerous other use cases for injectable UHF RFID tags, Kington notes, and Omni-ID is currently in conversations with potential partners and customers in several industries. For instance, LF tags are used to provide the identities of high-value assets such as agriculture vehicles.

The tags can be injected or embedded into seats in vehicles so they cannot be seen or easily removed. The unique ID number encoded on each tag could then be stored in a database, along with the corresponding vehicle's serial number and information. If a vehicle were stolen, it could still be identified by police with the use of an RFID reader. And if UHF RFID tags were injected in the seats, they could provide a long range read at a lower cost.

The fish-tracking project will continue for the next year, Kington says, following the initial tag development. "We're planning to deploy 5,000 tags in a real-life trial in November," he states.