The school's Unit for Nanofabrication lab is employing an RTLS solution from LogiTag to identify researchers' locations, and to issue alerts if a worker presses a panic alarm on an RFID tag.

May 30, 2014Researchers at The Hebrew University of Jerusalem's nanotechnology laboratory often work with dangerous gasses and chemicals, and may not have many people with them as they conduct experiments. If an emergency occurs, however, the school has an automated system in place that not only enables an individual to press a panic button and alert emergency personnel, but also determines where that person is located, and displays an image of him or her at that spot. The system employs a combination of active 433 MHz RFID technology and video cameras.

Hebrew University uses the solution primarily to provide safety, but also for billing purposes, by tracking who is located at which area within the lab, as well as for how long. By providing an RFID badge to each researcher, student or faculty member who enters the lab, and by installing readers and antennas around the facility, the university can track each person's movements via software designed to forward alerts in the event an emergency. The software also enables the school to view a breakdown of time and place records for every individual in the lab at any given time, for billing purposes. 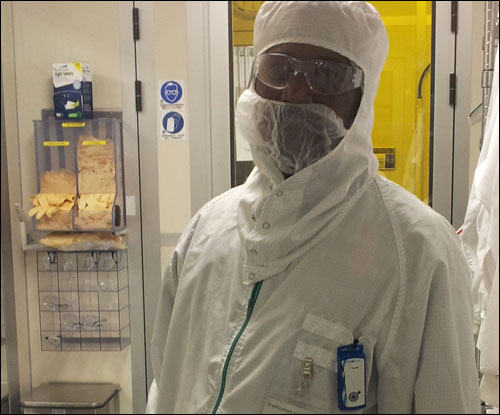 The school, one of Israel's largest universities, offers a variety of research opportunities for its own faculty and students, as well as for private companies, at its on-campus laboratories campus. The Unit for Nanofabrication (UNF) lab provides state-of-the-art tools for developing nanoscale structures and devices, with a focus on processing inorganic and organic nanomaterials. Some of these liquids and gasses can be highly toxic, while researchers also risk electrocution.

The university traditionally asked that each individual entering the lab provide his or her name, as well as arrival and departure times, for billing purposes (private companies, for example, are billed for their time at the lab). The school was concerned, however, about how to ensure that the more than 100 students and researchers using the lab would not be exposed or succumb to lethal chemicals and gasses. It thus enforced a rule that at least two people must enter at a time, and that both must be certified to work with nanomaterials, have attended the training classes held annually, and know what to do in the event of an emergency. Users normally book the lab for an hour or so during a single visit.

Hebrew University approached Orot Electronic Security seeking a panic-alert solution that would enable an individual to push a panic button if he or she was exposed to poisonous compounds used in the lab. The college also wanted to know the whereabouts of those within the lab, so that it could locate them immediately, if necessary. Orot installed a real-time location system (RTLS) at the UNF, provided by LogiTag.

While looking for a solution, Hebrew University sought a fail-proof panic-response system. "The most important function [for us was] to know the location of the person that pushed their panic button," says Shimon Eliav, a Hebrew University professor and the head of the UNF lab. "Time is critical—every second literally counts—and we need to know where they are. In addition, the system must be completely reliable—[it must] work on the first call. There isn't an opportunity to press the button more than once in critical situations. It, therefore, needs to work all the time, as originally intended."

The school had already tried an RFID-based alerting system that proved unable to properly identify the location of someone within the lab, which measures 180 square meters (1,938 square feet) in size and is divided into 10 rooms. The presence of a large amount of metal in the lab (including metal walls that reflect RF signals) made that older system's transmissions unreliable, so that even if an alert were pressed, it would be difficult to identify where that person was located. LogiTag began developing a new solution for the lab in 2012, and created a system consisting of 125 kHz long-frequency (LF) exciters and 433 MHz active RFID tags and readers. To overcome interference caused by the metal walls, the company devised a solution involving antenna design and reader power control, says Shlomo Matityaho, LogiTag's CEO. 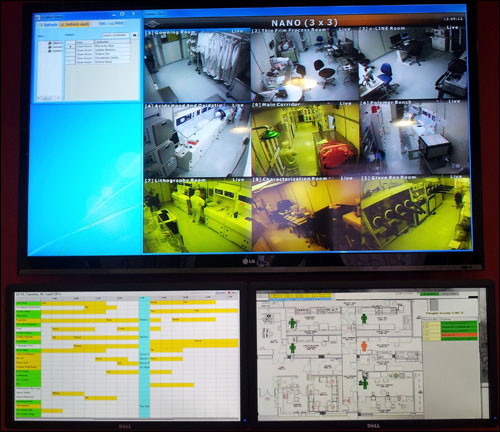 The LogiTag software displays the locations of all researchers in the lab, along with video footage from cameras installed within each of the 10 rooms.

The system consists of seven base unit readers and 20 LF exciters deployed throughout the lab.

Each technician or researcher entering the lab wears a protective suit with an attached LogiTag 433 MHz active RFID tag. While moving around the lab, he or she passes LF exciter antennas that send out a unique ID number. When the tag receives that LF transmission, it transmits its own unique ID, along with that of the exciter, to the base unit readers via a 433 MHz signal using a proprietary air-interface protocol. These readers then link the location data with that person's badge ID and forward that information to the primary base unit via 900 MHz wireless signals. That primary base unit is plugged directly into a computer to forward the data to a cloud-based server.

The LogiTag software interprets and stores the information, enabling users to access historical records for any search requirement. It also displays the locations of all researchers in the lab on a digital floor plan, along with video footage obtained from cameras installed within each of the 10 rooms.

If someone presses the panic button on his or her badge, that alert is forwarded to the university's central security department, as well as to the laboratory's manager. The system can then display the messages on the screen, send a text or e-mail message, or trigger a siren.

For billing purposes, Eliav says, "We know which student used the lab, when they were there, and for how long. We also know who is booked to work in the lab. This information is sent to the university's billing software and provides them accurate data. It's all automatic, so no questions or arguments arise."

The lab is employing 35 or 40 tags. For the future, the school is considering adding a "man-down" function with the technology that would issue an alert if an individual remained still for too long, indicating he or she may have been overcome before being able to press the panic button.

Installation began during the third quarter of 2013, Matityaho says, and the system was taken live in the fourth quarter. One key challenge for the installation was caused by environmental conditions within the lab. Not only was there a great deal of metal present, but the lab also required clean-room conditions, which meant there could be no drilling or damage to walls or other structures inside. "Research is down to a nano-level, which means each dust particle can damage an entire study," Matityaho states. "Both the technology and the installation had to be done carefully" to accommodate these issues.

"The new system is really secure, and can allow the students to be alone in the lab," Eliav says.