The CloudTags solution enables customers to view digital content about a product in the store by tapping a tablet against an NFC RFID tag, creating a wishlist and then receiving advertising online based on their in-store interests.

Aug 12, 2015U.K. luxury furniture company Heal's is employing radio frequency identification at one of its London stores to bridge the digital and physical worlds of product sales and marketing. The RFID-based solution, provided by CloudTags, enables customers to view digital content about a particular product at the store by tapping a tablet PC against a Near Field Communication (NFC) RFID tag, thereby creating a product wishlist, and then receiving e-mail messages and retargeted online advertising based on their product interests.

The solution paid for itself within one week by increasing store sales, says Oliver White, Heal's multi-channel director. Consequently, the retailer plans to expand the RFID solution to all of its five locations by the Christmas shopping season. 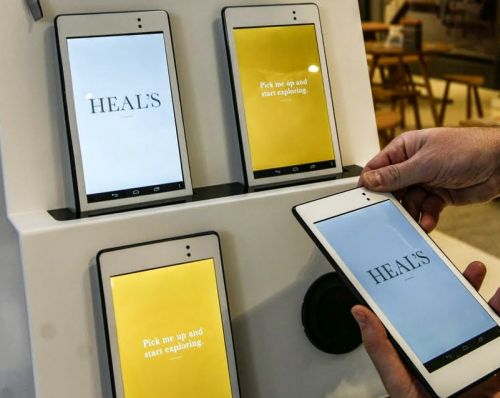 A Heal's customer can pick up one of the store's Nexus tablets and use it to access content about the products he looks at.

Heal's was established in 1818 as a feather-dressing company, and later began selling bedding and other furniture. Currently, the company offers British-made furniture and homewares at its three stores in London, and its other two in Brighton and Redbrick Mill (in Batley, near Leeds). Most of the retailer's sales result from customers' visits to its stores as opposed to online shopping, White says, since the items are of high value and cost, and shoppers prefer to experience them before making a purchase. "We know that customers who buy online do so after a store visit," he explains.

However, White notes, the company is also aware that the amount of information available to customers online can outweigh what they would have access to at the store itself. That digital content includes details indicating where a piece of furniture was made, its designer, its brand (if relevant) and such information as where it is available for sale and what other items might go well with it.

Therefore, in September 2014, Heal's installed the CloudTags solution at its flagship London store, in order to determine how well it would be received by customers and whether it would improve sales by linking digital data with the physical store experience. The solution, says James Yancey, CloudTags' CEO, utilizes customized Google Nexus tablets that customers can use to learn about the retailers' products. Smartrac NFC RFID tags, made with an NXP Semiconductors' NTAG203 chip and provided by Rapid NFC, were attached on or near merchandise throughout the floor of the store where furniture is displayed. (The other floors are dedicated to other home and branded products.) The store's employees carry NFC cards, similar to a credit card, as well as Apple iPads for a non-NFC experience.

Upon arrival, customers are greeted at the door and asked if a salesperson can help them. Those who say yes are accompanied around the store floor by a salesperson, who uses the iPad to access data regarding pieces of furniture, and to collect information about the items in which that customer is interested.

The alternative is an NFC experience. A customer who declines a salesperson's services is invited to pick up one of the store's Nexus tablets. When a shopper sees an item that interests him, such as a piece of furniture, he can tap the tablet near the tag attached to a sign or mounted to the wall next to that item. The tablet's built-in NFC RFID reader captures the tag's unique identifier and forwards that data to the CloudTags software on a hosted server. 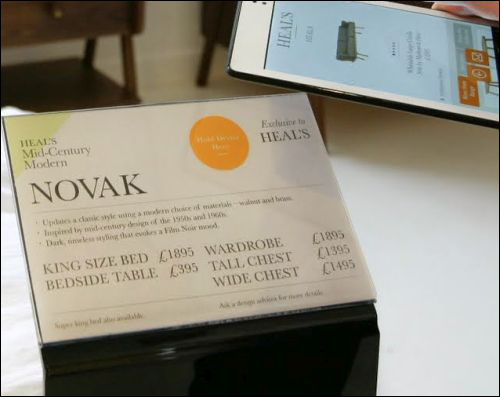 To access information about a particular piece of furniture, a shopper taps the tablet near the tag attached to a sign next to that item.

Based on the ID number captured, the hosted software provides the tablet with information relevant to the corresponding product, including its designer, the materials from which it is made and any recommended complementary items. The customer is also invited to press a prompt if he would like to store that product's information on a wish list. At the end of the shopping experience, he then receives the option of taking that list home for further consideration, by entering his e-mail address, or simply returning the device and remaining anonymous.

If that customer then requests help or information from an employee, that worker can tap her own NFC card against the shopper's tablet, linking her unique ID number with that individual. In that way, if the visitor later makes a purchase from his wish list, either online or in-store, the salesperson receives a financial reward from Heal's.

Once the shopper's visit has ended, he can select an option to save or modify his wish list, and have it sent to his e-mail address. The store will then e-mail him a message listing his products of interest, including a URL link for each item. If he opens the message on his computer at home and clicks on any of those links, retargeted advertisements related to those items will later appear on various other websites he visits.

Within a week of installing the NFC solution, White reports, the London store experienced an increase in sales sufficient to pay for the technology. Twenty percent of the customers who entered the store, he says, picked up a tablet and used it. Of those individuals, 30 percent opted to send themselves an e-mail message with a wish list—and of those customers, between 75 and 80 percent interacted with Heal's subsequent e-mail messages by opening a link that ensured they would receive what White refers to as "relatively delicate advertising" (the advertising displays were intended not to be so ubiquitous that they would overwhelm or irritate the customer).

The CloudTags system allows shoppers to learn more about not only products for sale, but also the company and the store's heritage features, such as a staircase designed by a famed architect. This is the kind of content, White says, that would otherwise be unavailable to customers.

"We've found the technology does add value to the customer's experience," White says.

During the next four months, Heal's four other stores are installing the NFC technology. In the meantime, employees are using the iPads and CloudTags software to collect shoppers' e-mail addresses and access product information.

Sometime after the NFC deployment is completed, White says, the retailer hopes to install Bluetooth beacons that could transmit information to the tablets so that users could view content relevant to the department in which they are located.

According to Yancey, the technology works well with tablets provided by the stores, but customers can also use their own NFC-enabled mobile phones to read an item's NFC RFID tag and receive related product information from the CloudTags server. However, he notes, those with iOS devices would not be able to use the technology.