Worshippers can use an app from technology company NaviBees to view their location in or around the mosque, and to navigate their way to their destination.

May 16, 2017When worshipers visit the Great Mosque of Mecca (also called the Grand Mosque), they are surrounded by thousands of others all finding their way within a place most have never seen before. The mosque—the largest in the world, located in Saudi Arabia—is the site of several pilgrimage rituals, including the Hajj pilgrimage, one of the largest annual gatherings in the world. Each individual must navigate the 4.3-million-square-foot area inside, as well as find their way back out. The mosque is surrounded by hotels in which visiting pilgrims stay, and gates that allow them entrance from different street locations.

This year, however, visitors can use an app on their smartphone, as well as Bluetooth Low Energy (BLE) beacons, to help them navigate the area. By using the app, they can identify their position in the corridors or at the Grand Mosque's gates, view that location on a map, and gain navigation to the site they seek. The beacon-based solution was provided by Dubai indoor navigation technology company NaviBees. 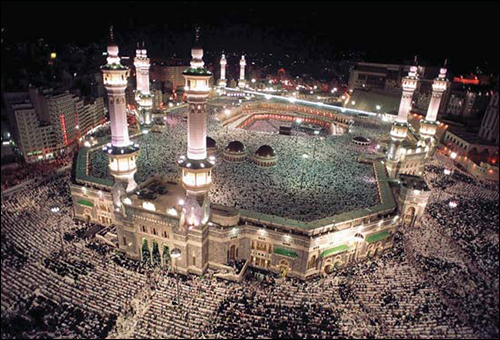 The Great Mosque of Mecca

NaviBees was launched in early 2016 by professors at Umm Al-Qura University in Mecca, explains Saleh Basalamah, NaviBees' CEO and an associate professor at the school's computing and information system college. Its first customer was the Red Sea Mall in Jeddah, for which NaviBees provided location-specific content to shoppers using an app at the mall. The company then developed a system for the Grand Mosque.

Millions of visitors come to the mosque each year. Inside is the Kaaba—a cuboid-shaped building in the center of the mosque that is one of the most sacred sites in Islam—and the Black Stone within the Kaaba, set intact into the wall by Islamic prophet Muhammad in the year 605 A.D. The mosque also has the necessary accommodations in and around the holy site, such as restrooms, restaurants and hotels. Traditionally, pilgrims have used signage and maps to find their way around the area. "It's massive," Basalamah says, including more than 100 gates to enable entrance to the holy site itself.

In summer 2016, NaviBees began installing its own beacon-based system to help visitors navigate the area. The beacon hardware was developed and manufactured by Averos, another university spinoff and a sister company to NaviBees. The indoor navigation technology company mounted 2,000 of the beacons in places where they would not be disruptive to the movements of large crowds. Each measures approximately 2 inches in diameter and is battery-powered.

With the new technology in place, the Grand Mosque now offers its visitors the NaviBees app for Android and iOS devices. The app is available in eight different languages.

Visitors first download the app, and then ensure that their Bluetooth function is on upon arriving at the mosque. The phone's built-in BLE reader captures transmissions from the beacons installed at gates, in corridors and in doorways, and the app identifies the individual's location based on those transmissions.

A user can view his or her location on the map of the mosque, and can input a requested site, such as a particular gate or a restroom, and the app will then display the route to that destination. When individuals are outdoors, the app uses GPS data to provide the same functions.

The next step, Basalamah says, is to enable the mosque to use analytics based on the beacon technology. By collecting and managing data from the beacon transmissions, as well as by taking into account responses to content on the app at specific locations, the mosque can better understand traffic movement and accommodate accordingly. For instance, users could view on the app where traffic is especially heavy, and what might be a better time to visit. Thus far, tens of thousands of people have downloaded the app.

NaviBees is now installing the technology at multiple Saudi airports for the General Authority of Civil Aviation (GACA). The company has gained support in developing the technology from the Saudi Arabian government's Technology Innovation Center that is aimed at directing research toward commercializable innovation as a way to diversify the country's economy beyond oil. That government effort, Basalamah says, focuses on more knowledge-based economy, and NaviBees is positioned to be part of that effort.