Since the systems need to track pallets of goods containing RF-unfriendly liquids and metals, the company chose battery-assisted tags to achieve the high reads required by clients in France.

Jul 13, 2006French RFID systems integrator NBG-ID, based in Cavaillon, says it has developed two pilots in France, each of which is set for wide-scale RFID deployment for a top-three global logistics provider. Both projects involve battery-assisted RFID labels supplied by Israeli-based RFID equipment provider PowerID.

The pilots, running concurrently, started in July of last year and have since been expanded into the first stages of deployment within the logistics provider's operations. Both were designed, deployed and managed by NBG-ID, and together use tens of thousands of PowerID L-1010 UHF labels. Each label includes an on-board battery—to help awaken and power the tag's chip when it is placed within a reader field—as well as an antenna optimized for backscattering a signal. This design has helped both projects achieve a tag read rate higher than what would have been possible using passive tags. 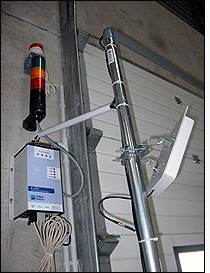 The pallet RFID tags are read at reader gates at the dock door of the distribution center.

"Passive tags can be good or bad, depending on the pallet loads they were attached to, but we needed to deliver a system with very high and reliable read rates," says Bruno Fabre, CEO of NBG-ID.

The PowerID L-1010 UHF labels used in both trials contain read-only tags pre-encoded with unique EPC numbers. These tags are compliant with the proprietary iP-X air-interface protocol developed by Ipico and are made with EM Microelectronic chips, encoded by the firm during manufacturing. The pilots also use PowerID readers, which are modified versions of UHF readers from SAMsys, now owned by Sirit.

In the project involving alcoholic beverages, a forklift fitted with a specially housed RFID reader and antenna reads PowerID tags placed on loaded pallets and also on the bins where the pallets are stored. With both the pallets and the bins tagged, an application connected to the forklift reader can track exactly which pallet is in which bin. The pallets and bins are located within a secure area that houses around 4,000 storage bins, although so far only about a third of them have been tagged. During the tagging process, NBG ID's software cross-references the EPC number on the tag with an asset (i.e., a pallet or bin).


While securely stored in the distribution center, the alcoholic beverages are not subject to government duties. When they leave the DC for delivery to the retailer, however, taxes must be paid. The logistics provider had previously used bar codes to identify pallets and bins, but that meant an accurate tax inventory needed to be taken manually and could be carried out only once per quarter.

According to PowerID, the French authorities requested more frequent notice of which goods were moved out of the DC. This led the logistics company to look into the potential of using RFID to automate the process. Inventory is now taken weekly, resulting in the retailer paying taxes on the beverages once weekly, according to an actual (rather than estimated) inventory count. For this application, government requirements made it necessary to have a 100 percent read rate for the system. This was achieved through the configuration of the RFID tags and reader in combination with software NBG specially designed to manage the system. 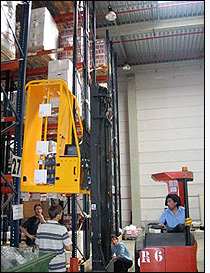 The tags are read once more at the receiving dock of the retailer's store.

For the second RFID project, the logistics provider tags pallets assembled at the DC prior to shipment to the retail stores. The pallets can contain a mix of grocery products, including those containing metals, liquids and metallic foil. Therefore, the pallet loads can have unpredictable effects on the RFID signals, prompting NBG to use PowerID tags after tests with passive UHF tags failed to deliver the minimum 99.5 percent read rate required by the retailer the RFID system to be a viable and more efficient alternative to the bar-code system it was using at that time.

The pallet RFID tags are read at reader gates at the dock door of the distribution center, and again at the receiving dock of the retailer's store. So far, 10 portals at two DCs have been deployed to track goods shipped to two retail stores. Each reader gate has an RFID interrogator fitted with four specially tuned antennas. According to PowerID, the installed system is recording read rates of 99.97 percent.

While the PowerID labels have delivered the required read rates, NBG says the tags cost approximately 20 percent more than passive UHF labels. Consequently, the logistics provider reuses the labels deployed on pallets by putting them in plastic sleeves attached to pallets. This allows operators to remove the RFID labels and return them once the delivery has been made.