Bosch Rexroth developed the solution to improve efficiency and accuracy at its own hydraulic valve assembly facility, and is marketing the system for use by other manufacturers as well.

Aug 26, 2015Bosch Rexroth, a manufacturer of electric drives and controls, has boosted productivity and reduced the volume of inventory it must keep onsite, by integrating radio frequency identification technology at its assembly line in Homburg, Germany. By employing a hybrid RFID and Bluetooth beacon solution that it developed in-house, the company has also made the production of several hundred variants of hydraulic valves more efficient and less error-prone.

The new assembly line solution, which was taken live in fall 2014, recognizes the worker at each particular workstation, as well as the components for the item being assembled there, and sends the appropriate instructions for the work in front of that individual. The system also tracks how many components are being used, thereby triggering the reordering of parts as needed. The company is currently marketing the technology to other manufacturers as well, while it plans to continue its own use of the system. 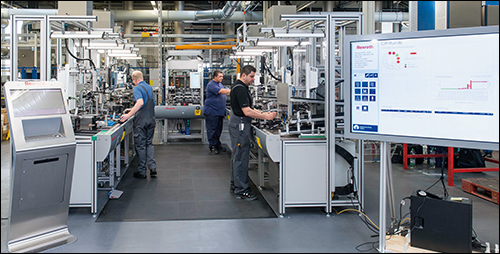 The solution sends instructions to each employee at his or her workstation, based on the components for the particular item being assembled at that location.

Bosch Rexroth, a division of the Bosch Group, makes products for the automotive industry, including hydraulics, electric drives, controls, gear technology, and linear motion and assembly technologies. The Bosch Rexroth factory in Homburg assembles more than 200 different types of hydraulic valves, according to the needs of its various customers.

Until last year, these 200 valve variations were manufactured on three parallel assembly lines. Because production lots are typically fairly small, the company must be ready to make any of the variants with short notice, meaning it must maintain an on-hand inventory of 2,000 different components for a variety of orders. In addition, workers had to identify each type of valve being made according to paper instructions. This process, the company reports, was slow and created a potential for errors.

The solution is a high-frequency (HF) RFID and Bluetooth system designed to link workers, products and machines during the assembly process. Bosch Rexroth refers to it as an Industry 4.0 solution—part of a public and private initiative to bring machines and the Internet together to allow for more intelligent manufacturing. The company uses its own RFID hardware and developed the IOT-Suite software (residing on a private, cloud-based server) that manages and stores the RFID- and Bluetooth-based data captured on the assembly floor, as well as displaying the appropriate data for workers.

Each assembly worker carries a battery-powered Bluetooth beacon incorporated into an ID card. The beacon transmits a unique ID number linked in a cloud-based server to information about that worker, such as his or her name and experience, as well as how detailed instructions need to be, and in what language. When an employee reports to the appropriate workstation, the Bluetooth receiver located at that station captures that individual's beacon ID number. 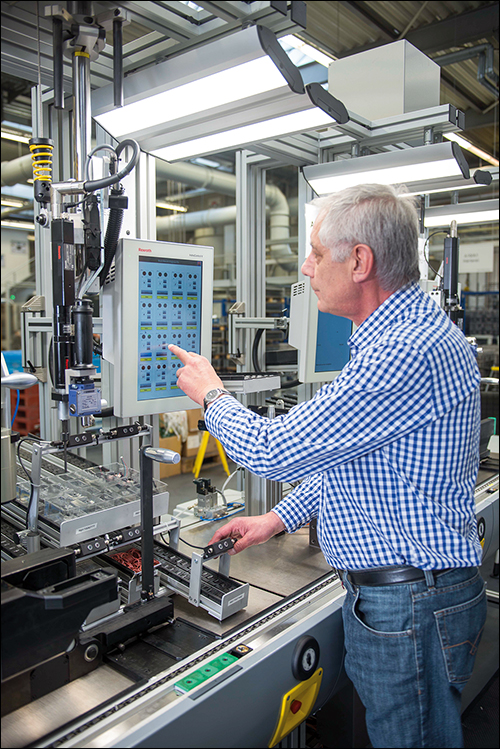 An employee uses a workstation touchscreen to indicate the steps he is completing.

A Bosch HF 13.56 MHz passive RFID tag, compliant with the ISO 15693 standard, is attached to each product or component upon being received at the plant, and is linked in the software to the serial number and other descriptors. As the tagged product or component arrives at one of the nine intelligent workstations for use in the assembly process, a Bosch Rexroth ID 200 RFID reader captures the tag's unique ID number, which is linked to data regarding that item. The software identifies what part it is, and thus which product is being made. It then connects that information to the worker's specific requirements, such as language and training, and displays the appropriate instructions for that component's assembly on a touchscreen mounted at that station, including all of the parts required to complete that step and how they are assembled. Staff members can use the touchscreen to indicate the steps they complete at that station.

The software also provides real-time analysis of the manufacturing processes underway, which it displays on a large screen on the factory floor for assembly workers and management to view. That display includes any alerts indicating a problem or deviation from the usual assembly process.

In addition, the software compares the collected RFID read data against information stored in the company's existing inventory-management software, in order to determine when parts or components need to be replenished and thereby ensure that production is never delayed. In the future, Jenke explains, that data could be shared with suppliers to make the reordering process even more automatic.

By using the RFID-based data, workers can quickly readjust to the assembly of new products for different orders. "The line is flexible enough that we could potentially reduce the switch-over time within six [common] product families to zero," Jenke says, adding, "Our approach to the introduction of Industry 4.0 is one of many small but fast steps." The company began designing the multi-product assembly line in mid-2013, and had it in operation just over a year later.

To date, Jenke reports, the system has provided the benefits that Bosch Rexroth had hoped for. "The numbers are truly amazing," he states. "The new line increased productivity by 10 percent and we could reduce our inventory by 30 percent." 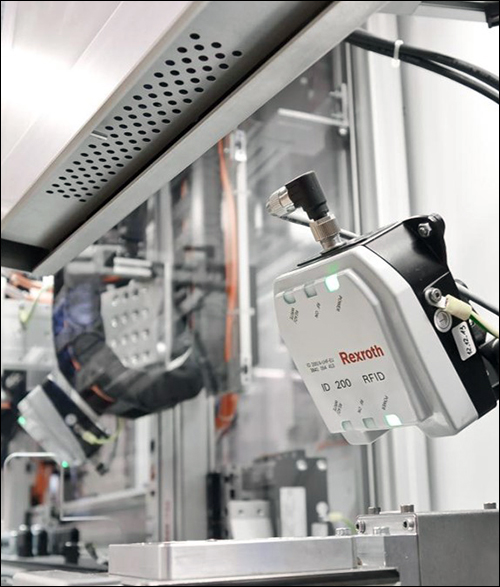 As an item arrives at an intelligent workstation for use in the assembly process, a Bosch Rexroth ID 200 RFID reader captures its unique tag ID number.

The use of the Bluetooth beacon and RFID technologies, Jenke adds, gives Bosch Rexroth the ability to change assembly operations in order to accommodate a different order. "We have full availability," he says, "because the line needs no switch-over for the different variants." Reducing errors had been another concern, since operators could make mistakes when reading paper-based instructions, either by misreading the text or by reading the wrong text. "We are very, very close to zero-fault manufacturing. What is equally important, the associates accept and like the new line because they feel less stress." This, he notes, is due to individualized working instructions and increased safety, since the systems recognize the work pieces' configuration automatically.

According to Jenke, the company is now offering the same solution to other manufacturers using Bosch hardware and software on a hosted server. "Industry 4.0 Bosch Rexroth follows a dual strategy," he says. "As a lead operator, we test and evaluate the potentials in small pilot projects on a regular basis in our own plants." Such hands-on experience in daily production, he adds, along with research and development, optimizes the products in use. "As a result, we can supply Industry 4.0-ready automation products and solutions to machine builders and system integrators, which are already tested and proven."