The company's Global Research division has come up with a design consisting of a standards-based 13.56 MHz RFID chip with an antenna coated with chemically or biologically sensitive films.

Oct 17, 2008Scientists at GE Global Research, a division of the General Electric Co., have developed a high-frequency (HF) 13.56 MHz passive RFID tag with an antenna capable of functioning as multiple sensors. The group—composed of analytical chemists, polymer scientists, and RF and microfabrication engineers—has created several prototypes of the RFID multisensor for various applications.

The researchers have successfully used an RFID interrogator to read the tag and its sensors' data. The new device could become commercially available in approximately two years, and could be employed for monitoring air, food or water safety, as well as for tracking the presence of chemical or biological contaminants in the surrounding area, or in a container's contents. 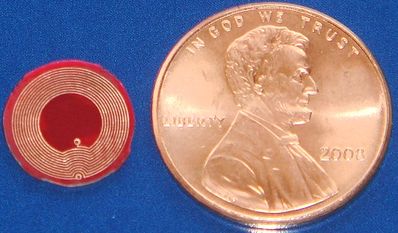 The GE sensor tag is smaller than a penny.

GE's battery-free wireless multisensor, however, would be a first of its kind, according to Radislav Potyrailo, a principal scientist at GE Global Research, and the leader of that company's wireless-sensor development team. Because GE's tag is battery-free and incorporates multiple sensor capabilities integrated on a single RFID chip, he says, it can be made smaller than a penny.

The sensor-tag could be used by the health-care industry, Potyrailo says, as well as for security, food packaging, water treatment, employee badges and pollution prevention, to detect chemical or biological threats. It could, for instance measure the presence of bacteria in foods or beverages, or of other toxins that could be present in such substances as vaccines.

Battery-powered RFID tags already exist that provide multiple sensing capabilities. Such a tag would typically require an array of separate sensors, each wired to an RFID chip that then transmits the sensor data to an interrogator. In contrast, GE's multisensing tag consists of a passive HF 13.56 MHz RFID chip (compliant with both the ISO 14443 and 15693 standards) with an antenna coated with chemically or biologically sensitive films.

"Our approach is to use the tag itself for sensing," Potyrailo says. "Thus, the tag still transmits a digital unique ID number but also becomes a sensor." For example, he says, to make it a gas sensor, the researchers would "apply a sensing film onto the tag antenna. With the deposited sensing film, the antenna becomes very sensitive to the desired gas."

The sensor's RFID reader can obtain a number of varied responses for this device—several toxic gases or volatile organic compounds, for instance (as many as three concurrently)—so that a user can identify the presence and level of individual chemicals in different mixtures, and under variable conditions. These conditions could include temperature or humidity fluctuations.

"The proper combination of antenna geometry and sensing material on top of the antenna resulted in the achieved detection limit of toxic gases down to approximately 100 parts per billion concentration," Potyrailo states. Usually, he notes, these kinds of sensor chips indicate only that a specific threshold has been exceeded, without providing an exact level at which the toxin or bacteria is measured.

"To have a smarter sensor," Potyrailo says, "you need a chip and reader that can read that." Because the researchers wanted a system that could use any HF RFID tag, they instead developed software that could be loaded onto an off-the-shelf reader, enabling it to read the data transmitted by that chip. "The beauty of RFID is that the whole infrastructure is already established," he says, "and we don't want to disturb that," by requiring new reader models and tags with special RFID chips.

By choosing passive HF RFID technology, researchers have been able to create a sensor tag that has a very small antenna, requires low reader power and has a relatively short read range. This offers privacy to users who might be concerned about an employee badge being read, for instance, without their knowledge.

One possible use of the technology would be to attach a sensor-tag to the exterior of a cardboard milk carton, to measure contaminants through the receptacle's wall. When the tag is excited by the modified reader, Potyrailo says, it would transmit such data as the level of bacteria in the milk, which it can measure through the cardboard. This data could then be utilized to determine whether or not the milk was spoiled.

According to Potyrailo, the sensor-tag's price is expected to be low enough for the tags to be disposable. They could be marketed by General Electric or another entity, he says, or built into a GE product.

The team is now evaluating the RFID sensors' storage shelf life, Potyrailo says, as well as their long-term stability during operation, and the effects of different environmental conditions on sensor performance.