The system employs an RF-based auto-ID system that uses sensors, satellite communications and GPS to track the location and status of 650 tank railcars in North America.

Oct 02, 2008Dow Chemical is using an RF-based auto-identification system to monitor in real time the status and location of its fleet of tank railcars that it uses to transport chemicals that pose a toxic inhalation hazard (TIH). The system employs Salco Technologies EverSee2 transponders, which combine sensors, two-way satellite communications modem and GPS positioning. Information transmitted by the device is sent to the Savi Technology SmartChain Asset Management platform and software, enabling the chemical company to receive regular updates of the railcars' locations and alerts in the event that something goes wrong. Dow can also share that data with any necessary agencies.

Dow Chemical has multiple projects underway for tracking products and containers. About four years ago, "We developed a strategy with 50 different projects to be implemented over the course of 10 years," says Craig Casto, Dow's global auto-ID and label technology leader. This included tracking trucks, barges and railcars and the multiple containers that are carried on any kind of vehicle. In 2005, Dow installed a Savi tracking system for TIH cylinders with a backbone software application that allows them to be tracked by means of bar-coded labels and Savi 433 MHz active tags throughout the supply chain (see Dow Reveals a Chemical Attraction to RFID). Now, the company is leveraging that Savi platform for the new EverSee2 system to help it locate railcars carrying hazardous chemicals. Of Dow's 26,000 railcars in North America, about 650 are carrying TIH chemicals, and Dow is in the process of installing the EverSee2 devices on those 650 cars. By the end of the year, Casto says, the entire fleet of TIH railcars will be using the new tracking system.

Every freight railcar today has two passive 915 MHz or 2.45 GHz RFID tags to comply with the American Association of Railroads' requirements for car-location tracking. Some railroad stations include RFID interrogators that capture the tag ID numbers as the freight passes, providing limited data as to the locations of railcars and freight. "For the majority of our shipments, that is sufficient," Casto says. However for hazardous products, Dow was seeking a real-time location system.

In 2006 Dow teamed with the Chemical Transportation Emergency Center (Chemtrec) to develop a Dow Chemical Company Railcar Shipment Visibility initiative to test wireless tracking of railcars, sharing data between Dow and Chemtrec on a Web-based platform (see Dow and Chemtrec's RFID-Based Rail Safety Project). That initiative has since led to this new railcar deployment, Casto says. 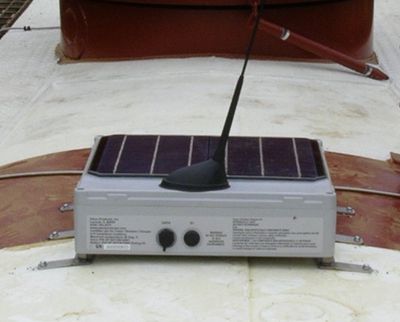 The EverSee2 transponder, attached to the top of a tank railcar, is wired to sensors for monitoring the status of the tank and the chemicals within.
The EverSee2 transponders can be programmed to wake up at defined intervals and send "Here I am" signals that include their longitude and latitude, as well as sensor detail such as temperature inside the cars. That data is sent via satellite to the Savi application, which makes the information accessible to Dow, Chemtrec and other authorized parties and can issue alerts in the event of an emergency.

Salco traditionally supplies railcar maintenance parts for the loading and unloading of dry and liquid chemicals onto railcars. In recently years Salco began receiving requests from customers about a track and trace solution for hazardous substances, says company president Dave Oestermeyer. In 2006 Dow requested a quote from Salco on the same kind of device. The result is the EverSee2, which is 4 inches tall and 14 inches in length and width, and includes a GPS unit as well as other sensors that can be attached to the surface of the railcar or inside the car dome and then cabled to the EverSee2. The unit is powered with a solar panel and rechargeable battery and includes an antenna for satellite transmission. Sensors can provide data such as the presence of a leak, a tank's internal temperature, and whether the dome has been opened.

Once the EverSee2 unit is installed on a railcar, it can be set to transmit its unique ID number, location and condition based on sensor data. The device transmits to the nearest of Orbcomm's 29 low Earth orbit (LEO) satellites. That data goes from the Orbcomm satellites to Salco, which then forwards the data to the Savi application, where it is interpreted and made available to Dow Chemical.

If Dow wishes to send commands to an EverSee2 device—to direct the unit to transmit its latest sensor status, for example, or change its transmission schedule—that function is done by Salco's Fullview software through the Orbcomm satellite system. The user would log into the Fullview application and choose the commands to send to the appropriate EverSee2 unit or group of units. Salco firmware loaded into the EverSee2 tracker allows it to receive those commands and respond accordingly. Salco also is designing a Bluetooth upgrade to the device, Oestermeyer says, that will allow emergency personnel to use a laptop with a Bluetooth radio to send commands to a railcar's EverSee2 unit and download sensor data at a distance of up to 1,000 feet away. This feature will be useful for situations in which there is an accident or car derailment and emergency personnel need to determine the status of the car's contents (such as its temperature or whether it is leaking) from a safe distance.

The system was put to the test by Hurricane Ike, when heavy winds and rain passed over Dow Chemical railcars, and the cars were set to send a status update every hour. "They performed just as they were designed to," Oestermeyer says.

Casto says his company adopted this system even though there are no government mandates requiring this kind of track and trace technology for hazardous-substance transportation. "Having this kind of capability addresses Dow's sustainability and safety focus and fits in with the direction that Homeland Security wants to go in," he says, noting that the system "seems to be working very well."