When you're involved in a car crash, waiting to be rescued can be a matter of life or death.

The ACNs, which include wireless mechanical vibration sensors and active RFID chips, are affixed to roadside objects and encoded with unique ID numbers that identify the objects. When there is a severe impact, the sensor emits RF signals to an interrogator, called the Pinpoint Remote Transmission Unit (RTU), located on a utility pole. 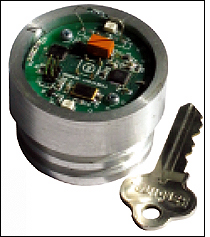 An Automated Crash Notification sensor can be affixed to roadside objects.

The RTU identifies the tag's ID, assembles a message, including the time and location of the crash, and instantly relays it over the Telepathx Urban Mesh Network to a supervisor in an operation center. From there, the information is routed to an emergency response team. Parameters have been set to avoid emergency calls when minor collisions occur.

Telepathx has tested the sensors in a controlled setting, using hydraulic impactors. "The sensor will actuate only on severe impact," says James Eades, the company's CEO and founder. "No one is interested in monitoring paint scrapes on guardrails."


The ACN will be field tested in about three months. "Once the unit is in final form," says Eades, "we will have it tested, calibrated and certified."