The Russian footwear retailer is using an item-level RFID system from Avery Dennison to track inventory, sales and security at one of its Moscow stores, and at a corresponding distribution center.

Jun 06, 2012Russian footwear retail chain CentrObuv is employing EPC RFID tags on shoes at one of its Centro stores in Moscow, as well as at a local distribution center, in order to improve inventory visibility automatically, thereby freeing up staff members while also improving accuracy. In addition, the shoe and boot company is testing the technology for point-of-sale (POS) and electronic article surveillance (EAS) applications within the store, and plans to install an RFID-enabled kiosk for consumers to access information regarding specific shoe styles. Considering the success of the initial installation—which began as a trial late last year—CentrObuv expects to expand the solution's use to all of its stores, though a timeline for that expansion has yet to be determined.

Until now, few Russian retailers or their customers have had much experience using radio frequency identification. In fact, CentrObuv may be one of the first businesses to employ Electronic Product Code (EPC) tags on its products, according to Francisco Melo, the VP of global inventory accuracy and loss prevention at Avery Dennison Retail Branding and Information Solutions (RBIS). CentrObuv is adopting the technology, in part, to manage its rapid growth throughout the country—in terms of both the number of stores, and the sales revenue generated at those locations. 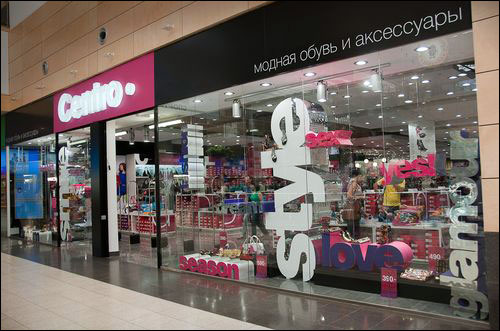 The Russian footwear retailer is attaching EPC UHF RFID tags to shoes at one of its Centro stores in Moscow.

"Our growth rate during the last five years has never been lower than 35 percent," says Marcin Tokarz, CentrObuv's commercial director. The company's 2011 revenue was more than $1 billion, he reports, and the retail chain had 800 stores by the end of last year, with 265 new locations opening in 2011. This year, the retailer plans to open 371 additional stores. "We offer high-quality footwear at a low price, and we can see that our consumers value that." Altogether, he says, the company must track more than 2,500 stock-keeping units (SKUs) of shoes and related apparel through its DCs and stores.

With such growth, Tokarz says, the company hopes to improve its inventory-management efficiency, increase its stock-counting accuracy and free up employees from the laborious process of tracking inventory. "The key advantages that we hope to gain from implementing RFID technology," he states, "are the solutions to these challenges—and, as a result, an overall improvement in business efficiency."

The system that the company has chosen to deploy, provided by Avery Dennison RBIS, is known as Quickstart, with software provided jointly by Avery Dennison and Portuguese RFID company Creativesystems. The solution consists of EPC Gen 2 passive ultrahigh-frequency (UHF) tags attached to one shoe in each pair, and Motorola Solutions readers to capture each tag's unique ID number, which is linked to SKU data in the back-end system.


Initially, a pilot was launched in November 2011 at a single Moscow store, as well as at a distribution center in the Moscow area. Now, the company is transitioning into a permanent deployment at the same two locations. At the DC, a worker first opens a box of shoes destined for the RFID-enabled store, and then scans its bar code. A SKU label containing an embedded RFID tag is generated by means of an Avery Dennison Monarch RFID label printer-encoder, after which a worker attaches the adhesive label to one of the shoes—typically, inside the sole. CentrObuv is utilizing two types of Avery Dennison RFID labels (the AD-380 and AD-316 models), with two form factors based on each shoe's particular size and shape.

The data is collected by the Quickstart software, Melo explains, but can also be forwarded to CentrObuv's own management system, which generates an advance shipping notice for the store.

Once the DC receives an order from the store, a warehouse worker picks the appropriate products and loads them into boxes for shipping. The employee uses a Motorola FX9500 fixed reader to interrogate the tags, updating the Quickstart software to indicate which items are being shipped. CentrObuv's software then sends an advance shipping notice to the store, based on that information.

At the store, employees utilize a Motorola MC3190-Z handheld to capture the unique ID number on each pair of shoes, thereby indicating its status as received. Several times a month, the staff also performs an inventory check, in order to ensure that the stock is accounted for. Prior to the RFID system's deployment, this had to be done by hand, by means of bar-code scanners—a process that was time-consuming and could result in fewer inventory checks being carried out. This also meant that inventory counts were not always entirely accurate.


The Quickstart software is integrated with CentrObuv's POS software. When a customer opts to buy a pair of shoes, he or she can bring the box to the sales counter, where a fixed Motorola FX7400 reader captures the ID number on the shoes' tag, causing the item to be marked as sold. When the customer carries the purchased pair of shoes through the exit, a Nedap !D Gate fixed reader installed at the doorway captures the tag ID and forwards that information to the back-end system, where the Quickstart software determines whether the shoes have, in fact, been purchased. If the system finds that the footwear was not paid for, an alert is sounded at the door, warning the staff that unpurchased goods are leaving the premises, as well as identifying which items have been removed from the store, so that additional inventory can be ordered.

CentrObuv also intends to test an RFID-enabled kiosk, which a customer can use to read a shoe's RFID tag. A screen at the station will then display other items sold at the store that may complement those particular shoes, along with additional information about the footwear itself.

However, Tokarz notes, company-wide installation of RFID for tracking inventory is CentrObuv's priority. "Our overall goal is to implement RFID systems throughout the entire company," he states.

Installations like that in use by CentrObuv might become more common in Russia, Melo speculates, adding that Avery Dennison intends to carry out additional RFID deployments in the country in the near future. "Russia is one of the emerging nations in terms of consumer growth," he says. "I believe here will be more [RFID installations] to come."

Detecting the Sound of Illegal Logging via IoT