Beacons Delivered Treats to Voodoo Festival Attendees, On and Off Site

During the Halloween weekend, the New Orleans event used Gimbal Bluetooth beacons, an Eventbase app and TouchTunes jukeboxes to bring information and promotional offers to music lovers at the festival and walking about the city.

Nov 09, 2015Voodoo Music + Arts Experience, a multiday festival held in New Orleans, is evaluating the results of a Bluetooth beacon solution used last month at its annual Halloween weekend music festival—to bring information and promotional offers not only to individuals attending the show, in the park where it was happening, but also to those in the community who might not have tickets. By using the Gimbal beacons and Eventbase's mobile application, Voodoo was able to reach even those not in attendance and offer them a chance to win free tickets, as well as provide content about bands and promotional details from sponsors.

The music and arts festival, owned and operated by entertainment company Live Nation Entertainment, is held annually in City Park around Halloween, and has featured big-name bands since it started 16 years ago. Live Nation has used Gimbal based-beacon solutions at other events around the country. Typically, the beacons are deployed around and within an event, and attendees can download a smartphone app for that program and then opt in to receive content based on their location. 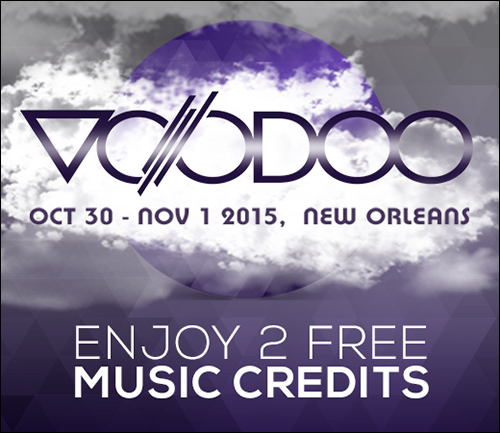 The Voodoo app displayed promotional offers when a user's smartphone came within range of a Bluetooth beacon.

In this case, however, Live Nation wanted to go one step further and bring content even to those who might not have tickets to the event, yet were likely to be of a similar demographic—young people with an interest in music. "With this technology, they have the power to engage fans outside of the venue itself," says Brian Dunphy, Gimbal's senior VP of business development and strategic partnerships.

So in addition to deploying a dozen or so Gimbal beacons throughout the festival, Voodoo also utilized beacon functionality at 1,200 locations around the Gulf area. Approximately 20,000 of 60,000 TouchTunes jukeboxes across North America already have Gimbal functionality built into them.

Users first had to download the Voodoo Music app—developed, provided and operated by Eventbase—on their smartphone. Versions of the app were available for Android and iOs devices.

At the event, each user's Voodoo Music app would display beacon-triggered data specific to his or her location within City Park. At the stage, for instance, a guest could view information not only about who was currently playing, but also which bands were up next and when they were scheduled to perform. As that individual passed the gift store tent, his or her phone would display data about some of the merchandise on sale, along with any promotions underway.

At specific locations, such as where a big-name band was performing, attendees were also invited, via beacon-triggered messages, to take and post pictures on their social-media accounts.

The system was also used for lockers. Many attendees required a place to leave their belongings as they walked through the park and attended concerts, so they could rent lockers for a day or for the entire weekend. As a guest approached the locker tent, that person's phone would receive a beacon-triggered alert indicating he or she had arrived at the correct tent, along with instructions explaining how to rent a locker.

The app proved especially useful, Dunphy says, when a storm cancelled the final day of the event. The decision not to open the festival gates on Sunday, due to the risk of flash floods, was made after the gates were closed on Saturday. In some cases, therefore, ticket holders had left their jackets, backpacks or other personal belongings in lockers and needed to be able to access them. Those individuals received messages on their phone instructing them on how to access their lockers and retrieve the contents.

The app also allowed sponsors to send promotions and advertising to attendees. However, Dunphy says, there was a much larger audience of music lovers who lacked tickets to the festival. For that reason, Voodoo and Gimbal went about using the Gimbal beacon functionality built into restaurants and bars. Advertising was posted inviting individuals not attending the festival to download the Voodoo Music app. Once they had done so, entered a bar or restaurant, and approached a TouchTunes digital jukebox, they received on their phone an alert containing content about some of the bands playing, and could view offers to enter a drawing for free VIP tickets to the festival.

Voodoo Festival did not respond to requests for comment about the solution deployed. Dunphy says the organization is still assessing the results of the beacon system used at the event, including how many people downloaded the app and responded to the beacon-triggered messages.