Feb 03, 2016Several federal agencies are currently in discussions with Momentum Aerospace Group (MAG), a provider of real-time situational-awareness technology and services, based in Woodbridge, Va., about testing a real-time location system (RTLS) to help manage training programs, such as active-shooter drills and shoothouses (live ammunition shooting ranges). The technology, known as TeamWorks, consists of Zebra Technologies' ultra-wideband (UWB) tags and readers to identify an individual's location (within inches) during training, as well as to capture sensor-based data, such as that person's heart rate and speed as he or she moves through training. The solution was developed by MAG, Zebra's Location Solutions division and Renaissance Sciences Corp. (RSC).

Francis Hoang, MAG's chief strategy officer, previously led a law-enforcement tactical team and served with the U.S. Army Special Forces in Afghanistan, and is personally familiar with the challenges related to training. Typically, a space dedicated for training events, such as a single building or campus of buildings, is filled with trainees and actors to simulate a tactical scenario (such as an active shooter). When the process is tracked manually—which is usually the case—several trainers watch the action, sometimes from above on a catwalk But with large numbers of trainees moving through a space quickly, it can be difficult to properly assess each participant's skills. 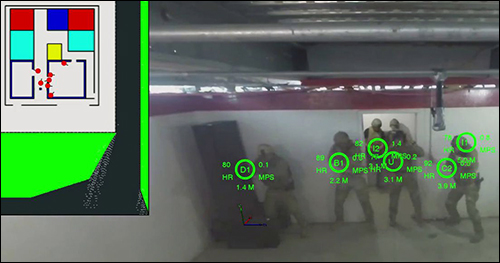 Trainers can access the software to view maps of the training area, along with icons indicating where individuals are located in real time.

The TeamWorks solution is of interest to both law-enforcement organizations (for high-risk operations) and the military (for close-quarter combat training). In either scenario, the action in live training happens fast, according to Kurt Kleinsorge, the director of human-performance research at RSC, a software firm based in Phoenix, Ariz. Consequently, he says, the fast pace can make it very difficult to analyze each trainee's results once the event is finished. Agencies use cameras in some cases, Hoang says, but the value of those can be negligible as well, since they do not track an individual's overall movement, speed or biometric data, such as heart rate.

In addition, Hoang says, sharing the results of the training with students is not easy if the information gained was already sketchy, at best. "Almost universally," he states, "the instructors have just about five minutes to gather a group and tell them the results."

MAG, RSC and Zebra worked together to develop TeamWorks to fill in the details for trainers and students regarding the training programs' results and effectiveness. The system uses RTLS hardware and MotionWorks location software provided by Zebra Technologies. Hoang says he was inspired by how Zebra's solution was being used to monitor National Football League players on football fields (see The NFL's Next Generation Statistics and RFID Drafted to Track NFL Players' Every Move During Games), and recognized that police and military operators could benefit from the same tracking technology. The tags transmit a signal 20 times each second to readers located 600 to 1,000 feet away, Hoang reports.

RSC offers a software package that uses MotionWorks' location data for what the company calls its application-specific instrumentation packages (A-SIPs), each of which is a miniaturized package of measurement devices required to match data needs to observational requirements, based on a training exercise's particular learning objectives. For instance, Kleinsorge says, if trainers are interested in the position and orientation of a trainee's torso, then an A-SIP can be used that is composed of RFID tags with supporting software from Zebra's MotionWorks. Once data is captured, the RCS software measures each individual's performance.

The software compares location data against parameters for behavior during the training event. "When a group of four trainees are lined up outside a door, we want the system to recognize that this behavior is part of the standard tactics, techniques and procedures [TTPs]," Kleinsorge explains. Once the software can recognize that the trainees are properly lined up according to TTPs, he says, it "can evaluate their performance in that context. For example, were they lined up in the right order?"

By using handheld tablets—which RSC calls instructor/operator stations—trainers can access the RSC software to view maps of the training area, as well as icons indicating where individuals are located in real time. They can also view historical location data. 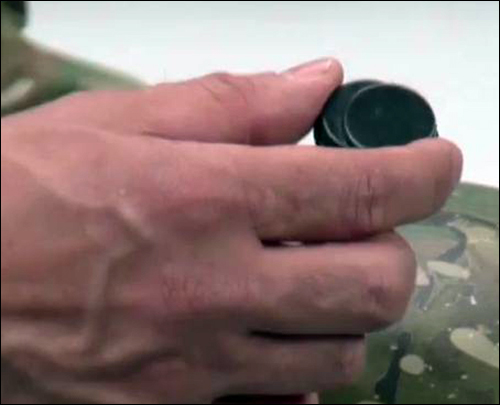 Typically, a trainee would wear two Zebra Dart tags, which are the size of a quarter, or the tags could be placed on weapons.

The RSC software not only can offer a virtual view of a facility and show the tactical position of individuals as they move around it, but it can also integrate with a user's existing weapon training system, such as Milo Range Pro, by feeding location, orientation and any sensor data into that system.

Although there have not yet been any deployments or pilots, Hoang says, the solution would work this way: Zebra's quarter-size Dart UWB RFID tags each come with a unique ID number linked to the identity of the individual wearing that tag. Typically, two tags would be worn, he notes—one on each shoulder. They can also be placed on an object, such as a rifle, pistol or stun grenade. Weapons can be linked to specific trainees.

Individuals would be given their instructions (typically to disarm or take down an active shooter), and would then enter the training area. Dart receivers installed throughout the area would capture the tags' ID numbers at a distance of up to 1,000 feet, and transmit that information to a hub running the MotionWorks and RSC software, via a cabled connection. The location data from the MotionWorks system is forwarded to the RSC software, and operators can review the information in real time, or after the training is finished, in order to assess how the individual moved around the area. The system can determine not only a trainee's location, but also his or her orientation (where he or she was facing) and that of a weapon. Analytical data can include distance traveled, average speed, top speed or other performance statistics, as well as sensor data.

In the near future, Hoang says, TeamWorks will include Bluetooth Low Energy (BLE) radios, enabling the Dart tag to collect data from sensors, such as heart rate measurements from Bluetooth-enabled devices worn by trainees. The sensors could take measurements—for instance, heart rate or moisture level (indicating sweat)—and emit that data to a Bluetooth receiver built into the Dart tag. That information would, in turn, be sent to the Dart receivers, along with the tag's unique ID.

The company demonstrated its technology at the International Association of Chiefs of Police (IACP) conference, held in September 2015. Since then, it has been speaking with a variety of agencies, both federal and local, regarding how the technology might be deployed or piloted within their organizations.