A test involving car tires demonstrates the importance of designing an RFID deployment that can read tags individually.

Apr 03, 2006In simplest terms, singulation theory states that an RFID practitioner needs to understand the deployment of an isolated tag (hence, the term 'singulation') before attempting to manage a group of tags (see Six Sigma and the Single Tag). Using RFID labels on tires as an example, this column demonstrates the risks associated with not applying this theory, as well as some techniques to apply it successfully.

The majority of Michelin's publications regarding tire RFID have focused on embedded RFID tags. Michelin has developed a permanent RFID tag capable of being cured directly into the tire. In order to provide a practical example of singulation theory, however, this article will focus instead on the deployment of a temporary RFID label applied to the tire's surface.

Two different styles of UHF RFID transponders were used, each utilizing an SOP chip soldered to an antenna.


Two different styles of UHF RFID transponders were used in this test. Each type utilized an SOP (small outline package) chip soldered to an antenna. An SOP is a traditional electronic package employed to protect the chip from its environment, including the ability to cure the device into rubber.

Other tag-antenna attachment techniques—such as flip-chip or direct bonding—have been proven non-robust in tire-tagging applications. One SOP tag for this test was manufactured on a flexible substrate, while the other was the tag developed by Michelin that could be cured directly into the tire. This Michelin transponder has a spring wire antenna soldered directly to the SOP on a miniature thin circuit board


The Trouble With Tires


Since the test was performed in a retail store, it was fortunate that tires from three suppliers were available in a row. Samples from Michelin, B.F. Goodrich and Goodyear were used in this test.

Two key points need to be appreciated before we discuss the test. The first is that the quantity of carbon black contained in tires can vary on the order of 6 to 10 percent. While carbon is key to the mechanical strength of the tire rubber, it has a strong negative effect on the performance of RFID. Specifically, UHF RFID is known to be negatively influenced by materials with a high dielectric value. Since carbon has a high dielectric value (ability to conduct electricity), it subsequently detunes UHF RFID greatly. Thus, an RFID label's read distance performance can change depending on the type of tire to which it is applied. For example, on the sidewall of a passenger tire (containing a low amount of carbon), the read distance might be 36 inches; on a heavy truck tire (with a higher amount of carbon), it might be 18 inches; and a giant earthmover tire (which has a very high amount of carbon) might read up to 6 inches. 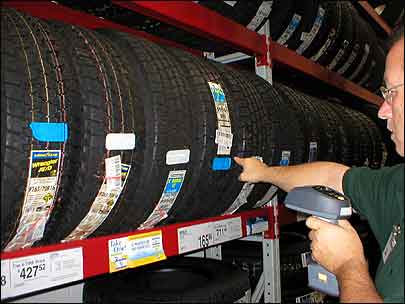 Tires with tread RFID labels placed in rows were tested.

If you consider placement of an RFID label on the tread of a passenger tire, you have to appreciate that the tread design pattern is a combination of rubber and air sections. Air does very little to detune UHF RFID, since it is the normalized base reference by which dielectric systems are compared. Carbon in tires, in fact, can have a dielectric effect more than 1,000 times higher than that of air. It follows that depending on the tread pattern (the ratio of air to carbon and rubber), one might expect entirely different read distances from a tag placed on the tread area. This even applies to the potential for differences depending on where the label is placed on identical tire treads. It can be demonstrated that just moving a label from one position to the next on the tread of a single tire can result in read distance differences of up to 40 percent. The same difference—or greater—exists between dissimilar tires.


During the first attempt to use a handheld interrogator to read a row of tires from a distance of 18 inches, two tire labels were identified. By moving the device closer to the tires, either two or three tags were read. In a different row, only one tag was read from the same distance, though the RFID label read was not the one placed directly in front of the reader. When interrogator reader was moved closer, two or three tags were read.

During these tests, the correct tire and label in the row were never individually read, and it should come as no surprise to learn that stacks and rows behave similarly. Imagine being a technician, manager or customer trying to buy specific tires. Ultimately, picking tires based on tread-mounted RFID labels is unreliable.


Singulation and the RFID Label


The dilemma presented above emphasizes the field nature of RFID. Even though the handheld reader employed had a linearly polarized antenna, it still projected the RF beam as an expanding field. The best way to visualize this is to imagine the RF reader as a flashlight projecting a beam of light that becomes wider as the distance from the flashlight increases, and that any tag within the field of the light can be read. The farther the tag is from the reader, the wider becomes the field of reference that includes the tag (and, potentially, many other tags).

This phenomenon is in stark contrast to the use of a bar code reader. Utilizing a narrow laser beam, a bar code reader traditionally scans only one bar code at a time. As a simple test, compare a pointer laser and a conventional flashlight. Imagine the laser precision as it individually scans over an individual bar code, while the RFID tag would be read as a result of being in a field similar to that emitted by the flashlight. One way to bridge this difference would be to find a way to cause the RFID system to behave more like the bar code system. 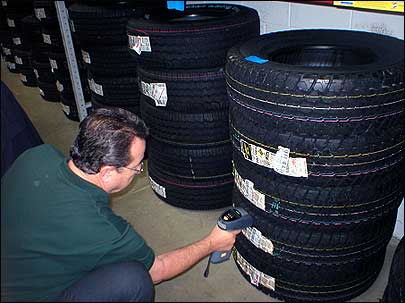 Also tested were tires with sidewall labels, placed in stacks.

Unfortunately, many RFID implementations today try to replace bar code systems directly with RFID systems, ignoring the process issue that RFID projects a wide field while the bar code scanner is more linear. The real goal is to enable the interrogator to read each RFID tag individually. There are many ways to approach this goal, but once it is accomplished, a reliability in excess of Six Sigma becomes possible—even routine—as does a high degree of automation, because RFID does not have to find the tag, as a bar code reader does. While this appears to be a disadvantage for the RFID system, that's only because most people imagine RFID as a direct replacement for bar codes. If the RF field has only one tag in the field, not only can RFID be at least as effective as a bar code, but it can be far more automated since the bar code needs to be specifically oriented and scanned by the narrow beam of a laser, whereas the RFID tag need only be within the field. This means an RFID system, when properly designed, can be faster, more reliable and more automated.

The sidewall of a tire is physically more uniform than the tread area of a tire. In fact, it is generally possible to attach an RFID label to a uniform surface on a sidewall, as there are more smooth surfaces available. Imagine a typical tread pattern; now imagine the probability of centering the tag over an identical location on an adjacent tire. On the first tread tag, the chip portion could bridge an air space, while on the other, that chip might rest on the tread rubber.

Furthermore, when the tags are located on the sidewalls of stacked tires, the surface of the opposite sidewall in the same stack acts as a filter or barrier to RF propagation. The adjacent sidewalls of two tires, with an RFID tag on one sidewall, forms a sort of rubber sandwich with an air gap in the middle. This acts as the only channel for the reader beam to read the "singulated" RFID tag.

In the course of this test, tags placed on the exterior surface of a sidewalls provided 100 percent reliable reads. The test results did not suggest that retail solutions should include such an RFID label, but they did reveal that the same tags and tires can be organized so that either 0 percent or 100 percent reliability is attainable. This is a remarkable example of singulation theory. In the case of the tire-tread label, no amount of practical efforts would net a high-speed reliable material management system. By contrast, as demonstrated in this test, a sidewall tag location could be employed for high-speed reliable material management.

Pat King is Michelin's global electronics strategist and the company's representative to EPCglobal.