The Object Is the Antenna

An antennaless tag turns any metal object into an RFID transponder.

Jun 01, 2012Researchers at the North Dakota State University (NDSU) Center for Nanoscale Science and Engineering (CNSE) have developed an antennaless RFID tag that essentially turns a metal object into the device's antenna. "I came up with the idea when I was working with the U.S. Department of the Navy, which wanted a thin tag that could go on metal," says Cherish Bauer-Reich, a research engineer at CNSE. "Most RFID tags used on metal have a spacer, but tags that stick up from the surface of an object being tracked are prone to being damaged or knocked off." 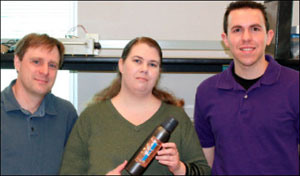 From left: Michael Reich, Cherish Bauer-Reich and Layne Berge with a prototype of their antennaless tag

The challenge was coming up with a tag that could lie flat on just about any metal object and remain readable. If the antenna of a conventional passive ultrahigh-frequency tag touches the metal surface of the object being tracked, the tag is hard to read. On nonmetal objects, the RF energy from a reader creates an electrical charge that is captured by a passive tag and used to reflect a signal. But when a tag is on a metal object, the RF energy creates an induced charge on the metal, negating the charge captured by the tag.

Rather than limiting the induced charge, which is the way most metal-mount tags work, Bauer-Reich came up with the idea of using it to power the chip. But she had to get the induced charge to flow into the RFID microchip. Her solution was to use magnetic material to force the charge through the chip. She designed a small metal loop that straddles a strip of magnetic material. When the object is zapped with energy from the reader, an electric field is created. The magnetic material helps capture the charge induced on the metal and diverts it into the loop, where it powers the chip. 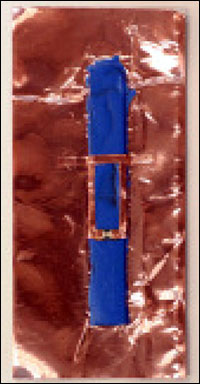 A close-up view of the antennaless tag

Michael Reich, a senior research engineer at NDSU, helped choose and test a variety of special materials. The researchers decided to use off-the-shelf ferrites. Layne Berge, an undergraduate student, built and tested prototype tags. The team now has a working prototype, which uses an Alien Technology Higgs 3 RFID chip. The tag can be read on aluminum plates, coffee cans and electronic devices with metal cases, from distances of 3 to 6 feet. While this isn't as good as a conventional metal-mount tag with a spacer to keep the antenna away from the metal, Bauer-Reich believes that with further refinement—changing the properties of the magnetic material, for example—the team will be able to increase the tag's read range.

The patent-pending technology is available for licensing. "We're hoping to find companies that are interested in working with us to take the concept to the next level," she says. "The tag could be optimized for particular applications. For instance, the DOD is interested in tagging ordnance [military supplies]. A tag designed to work on ordnance could be optimized to get a longer read range."