Dallas Gold & Silver Exchange (DGSE) is using EPC Gen 2 tags to improve the management of its inventory of jewelry, diamonds, watches, rare coins and other products.

Early this year, DGSE decided to take EIS—an RFID systems integrator based in Carrollton, Texas—up on its offer. Last month, the retailer replaced the bar-code labels used on its products with passive EPC Gen 2 RFID tags, as part of a program that the company says has slashed labor costs, boosted inventory accuracy and improved store security. As a result, DGSE is now reaping the rewards. 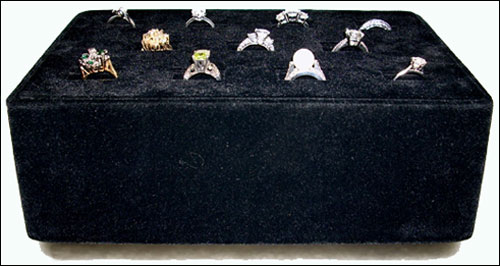 EIS designed a special tray that allows the tags to hang under the rings, thereby ensuring good RFID readability.

Before deploying radio frequency identification, Diane Goff, DGSE's manager of internal controls, spent a major portion of her time counting the jewelry and other items that her company sells. Every quarter, she'd visit DGSE's flagship location in Dallas, as well as its smaller stores in Euless, Texas; Charleston, S.C.; and Woodland Hills, Calif.—and conduct a physical inventory. At the Dallas location, which maintains a stock of roughly 6,000 products, this process took approximately 60 hours in total (or, cumulatively, six weeks annually). Add in the other three stores, each of which holds an inventory of around 1,500 items, and this part of her job became a huge time-suck.


These days, Goff's job is quite different. A passive EPC Gen 2 RFID tag is attached to every item in each store. As an item is received into inventory, an employee attaches a tag encoded with that product's item number. Each morning, after workers at each location move trays from the store vault to glass jewelry displays, they move a handheld RFID reader over each tray. The reader transmits the tag numbers to EIS' middleware, running on the retailer's network, which filters out duplicate tag numbers and forwards the list of tag numbers to the proprietary point-of-sale software.

Back at the Dallas office, Goff runs this list against a master list showing the inventory that should be at the store. She then sends the store employees a list of any items missing from that list—the interrogator occasionally fails to read two or three tags when initially passed over the trays, explains Darryl Hubbard, EIS' president and founder.


"Then the store gets the list and enters the IDs—manually now, which doesn't take long, as it's usually only two or three ID numbers, but eventually we'll automate this step—and puts the reader in search mode," Hubbard says. "Then, they use the handheld to find the missing items. This automatically loads these items to the inventory list."

If this step reconciles the actual inventory with what the master list indicates as being in the store, the process is done. However, if one or two items are still missing at this point, then Goff must further investigate the discrepancy.

This process is repeated each morning, at every store. Does this result in a more accurate inventory database? "You bet it does," says William Oyster, DGSE's president. The main reason for the improvement, he notes, is that when inventory records needed to be reconciled under the bar-code system, employees had to laboriously comb through records. Using the RFID reader in search mode, he says, usually rectifies the mismatched records quickly.

The RFID system has also led to some unintended benefits, Oyster says, noting, "We're a public company, so we get audited annually." As part of that process, Goff used to be asked to collect a long list of products. To accomplish that task, she would have to look carefully through the cases in order to find each product. Now, she can simply take the handheld reader, set it on search mode and root out the requested items from the cases.

What's more, Oyster adds, when inventory was conducted less frequently, it was more difficult to locate a misplaced item, since it could have been missing for many days or weeks before its loss was noticed. With the daily inventories, he says—made feasible thanks to the RFID readers—"you can find out what happened [to a misplaced item] before the trail gets too cold."


To further leverage the value of the RFID tags, EIS deployed portal readers around the entrance and exit doors at each store. Venture Research, a Plano, Texas-based systems integrator and manufacturer of RFID solutions, provided these portals, each containing large antennas wired to a Gen 2 RFID reader module, provided by ThingMagic.

The portals are set to trigger an alarm if any tag encoded with a number from the DGSE inventory list is detected. At the same time, the software automatically e-mails Goff a list of any items shown to have left the store. This helps her keep the records accurate, while also saving time later if those items are not found during daily inventory checks. The addition of the portal readers may help deter theft in the store as well.


Because many of the products—rings and coins, for example—are small, EIS needed to develop a tag form factor that could be added to the range of products, and that would enable customers to handle and try them those items without interference from the tag. Moreover, the tag needed to withstand high temperatures and humidity, since employees periodically steam-clean the products.

EIS and Venture Research worked together, along with an unnamed provider of RFID inlays, to develop the tag, which contains a special adhesive that can withstand the cleaning process. The inlay is protected within a polyethylene terephthalate (PET) plastic housing. The RFID label is only slightly larger than the bar-code label that it replaced. The tag is attached to the product via what John Baker, Venture Research's president, describes as a "rat tail" from which the tag hangs. This offsets the tag from the product, preventing it from getting in the way of a customer trying that item on for size.

According to Hubbard, EIS also designed a special tray enabling the tags to hang under the rings, thereby ensuring good RFID readability, as proximity to the metal band could otherwise interfere with the RF signal.


"Diane Goff immersed herself in this project," Hubbard states. She was part of the process from the time that EIS began working with DGSE early this year, and was keen to help determine the best tag placement on each type of product. Moreover, she helped to identify ways in which the RFID system could be employed outside of inventory management—such as using the readers to collect products for annual audits. "Having a customer who participates and has a positive outlook, and is willing to put time into a project, helps us make a successful deployment."