The military's logistics and materiel divisions have finished testing both active and passive tags, with deployment dates yet to be determined.

Dec 02, 2013Following more than a year spent testing the use of passive ultrahigh-frequency (UHF) RFID tags on uniforms destined for Swedish soldiers, the Swedish Armed Forces intends to begin rolling out a permanent radio frequency identification system sometime within the next two to five years. The technology will be used to track personal soldier equipment, thereby improving efficiency at multiple locations throughout the country.

The Swedish Armed Forces has been testing a variety of RFID solutions since 2004, in order to determine how the technology could help provide visibility to goods sent overseas. Trials of active RFID tags to monitor consignments (containers loaded with equipment) shipped abroad led Sweden's military to procure an RFID system for consignment tracking, called SCAR. In 2012, the Swedish Armed Forces logistics division, known as FMLOG, and the Swedish Defense Materiel Administration (FMV)—which provides equipment, supplies and related services to the military—conducted another series of tests related to passive RFID technology, to track uniforms prior to their assignment to a soldier. 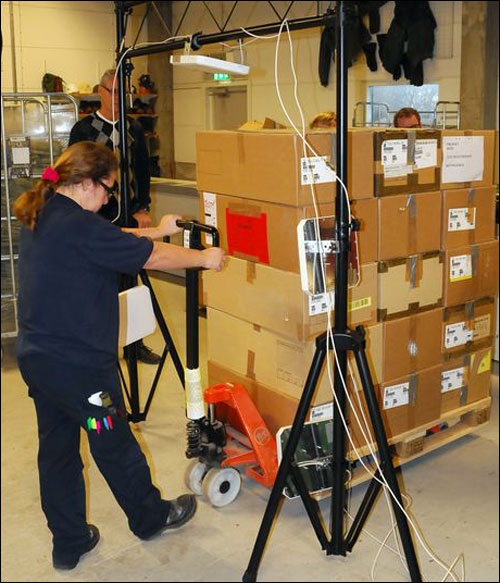 During tests involving tagged uniforms, rolled cages and pallets loaded with garments were rolled through portals consisting of an EPC Gen 2 UHF reader and four antennas, and collected each item's ID number.

Since 2004, HiQ International has been helping the FMV test, evaluate and develop RFID systems. Historically, HiQ has provided the armed forces with such solutions as a simulator for the JAS39 Gripen fighter aircraft, but in 2004, HiQ began looking into RFID technology at the FMV's request. To identify the best solution for tracking containerized goods being shipped overseas, the FMV and HiQ investigated similar solutions used by military agencies worldwide. It then identified and provided a solution from Savi Technology, consisting of Savi active RFID tags, receivers and software to manage the collected read data. The active tags were attached to containers, as well as to some pallets of goods intended for international transportation, according to Peter Lindecrantz Häggström, the head of HiQ's corporate communications. The resultant SCAR system has been delivered to the Armed Forces, he says, but has not yet been put into service.

Several years ago, while the active RFID solution was being piloted, the Swedish Armed Forces' HQ and FMLOG indicated that they were also interested in deploying passive RFID tags to track uniforms and other items, thereby reducing the amount of time workers spent conducting inventory counts at multiple depots and warehouses throughout Sweden. "The armed forces have been inspired by civil industries to use passive RFID to streamline different work processes, and obtain a more accurate accounting in near real time," explains FMLOG's Lt. Col. Martin Nylander.

In 2011, the Swedish Armed Forces HQ assigned the FMLOG and FMV to begin testing passive RFID technology. "The tests [focused] on handling of soldier equipment," Nylander states, "because the large amount of soldier equipment of different types has quickly become a problem in the area regarding inventory of stock." In this case, the FMV, with HiQ's help, acquired off-the-shelf EPC UHF RFID readers and tags, which it then began testing.

HiQ, FMV and FMLOG installed several reader portals at an Armed Forces storage depot in Revingehed, in southern Sweden, says Anders Nilsson, HiQ's managing director. The agencies also began providing handheld RFID readers, as well as EPC UHF passive RFID tags to be sewn into, or applied to, uniform pieces. Nilsson declines to reveal the make and model of the tags and readers used, indicating that the specific makes and models of hardware were not of great importance to the project.

Although the Swedish Armed Forces plans to proceed with a deployment, Nilsson says, the makes and models of RFID tags and readers have not yet been decided.

The facility at Revingehed supports the equipping of soldiers, each of whom is provided with uniforms from the stock supplies in the facility's warehouse. As goods are brought into the warehouse, after which workers input the items into the agency's SAP software, and then store them until they are needed by soldiers. Approximately once annually, warehouse personnel complete an inventory process to confirm what is on hand, opening each box to identify the items packed within. With the RFID testing, all items were tagged with passive UHF EPC labels. When warehouse workers conducted an inventory count, Nylander reports, the process took about one hour to complete, as opposed to the 30 hours required without RFID.

FMLOG, FMV and HiQ rolled cages and pallets loaded with uniforms through portals consisting of a reader and four antennas, and collected each item's ID number. The goal was to test the readability of tagged equipment in different scenarios.

PDAs with built-in RFID readers were also tested, Nylander notes, but the results did not impress FMLOG. "We drew the conclusion that PDAs worked less well in the Swedish Armed Forces environments in the main scenarios, while fixed reader equipment worked really well," he states. Equipment tags that passed through the reader portals were interrogated at a rate of about 99 percent.

Given the positive test results, the Swedish Armed Forces plans to upgrade its software to support RFID in 2015. "We have decided to include automatic data capture with both bar code and passive RFID," Nylander says. "These technologies will complement each other—but it is clear, from the Armed Forces perspective, that passive RFID is the key technology to achieve efficiencies."

Between 2015 and 2018, the Swedish Armed Forces intends to begin applying passive RFID tags to personal soldier equipment. In addition, Nylander says, "RFID technology and the tests and experiments carried out have attracted great interest, which is likely to lead to several more identifiable areas where technology can be beneficial." That, he adds, could include applying tags to equipment requiring maintenance, as well as enabling staff members to update data about services provided for each item, linked to the ID number of that object's passive tag.

HiQ says it is interested in offering similar solutions to companies in the private sector looking to use RFID technology to improve their work processes.