Nov 04, 2008The air at the Ports of Long Beach and Los Angeles should soon begin getting cleaner, thanks, in part, to radio frequency identification. Last year, the ports rolled out the San Pedro Bay Ports Clean Air Action Plan, with the goal of limiting the air pollution and greenhouse gas they generate, as well as reducing human health risks associated with pollution. A subset of the plan, the Clean Truck Program, will employ RFID tags to identify trucks entering the ports, so fees can be charged to vehicles failing to meet minimum emissions standards.

The ports created the San Pedro Bay Ports Clean Air Action Plan in partnership with the South Coast Air Quality Management District, the California Air Resources Board and the U.S. Environmental Protection Agency. The goal is to reduce truck-related air pollution by 80 percent by 2012, cut particulate-matter pollution from all port-related sources by at least 47 percent within the next five years, and reduce smog-forming nitrogen oxide emissions by more than 45 percent, as well as sulfur oxides—which contribute to particulate matter—by at least 52 percent. To help meet these targets, participants are working to eliminate older pollutant-spewing diesel trucks from San Pedro Bay cargo terminals within five years, by helping to finance new or retrofitted clean-emission vehicles. 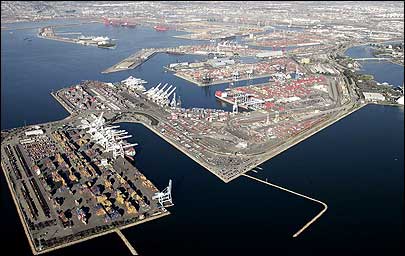 Fortunately, RFID tags required for the Clean Truck Program have already been issued to many trucks currently serving the ports, as part of another program known as PierPass, which launched in 2005 in order to tighten port security and stem truck congestion at the ports (see PierPass Makes Truck Tag Mandate). To leverage that RFID infrastructure, the marine terminal operators that had formed PierPass opted to create another organization, called PortCheck, that would utilize the same RFID tags.

In addition to levying fees based on the age and emission levels of a truck's engines, PortCheck will also enforce a ban on trucks older than model year 1989 (unless they are equipped with a newer engine). Trucks with diesel or alternative-fuel engines manufactured in 2007 or later are exempt from the fee, because they are the cleanest-burning of all trucks—unless those vehicles were purchased with funds provided by Clean Truck Program grants, in which case a fee will apply.

Bruce Wargo, president and CEO of PierPass, will also reside over PortCheck, and says fee collection should begin by the middle of this month. The program launched on Oct. 1 with a ban on trucks containing engines that predate 1989. Fees are not yet levied for other trucks allowed to enter the ports, however, because the RFID reader infrastructure, including electronic gates that will control terminal access, is still being installed and tested at some of the terminal entrances, since not all of the terminals were fully outfitted with interrogators and control access gates for the PierPass program.


To date, Wargo says, approximately 27,000 RFID tags have been issued to trucks utilizing the ports since the PierPass program began. A portion of these tags, he notes, have been issued more recently, for new trucks that have just been put into service, or that just began coming to the ports.

The earliest type of tag issued by PierPass was the WhereTag III transponder, an active, 2.4 GHz tag made by WhereNet. The WhereTag III employs an air-interface protocol compliant with the ANSI 371.1 real-time location system (RTLS) standard. But PierPass has since transitioned to the WhereTag IV transponder, which still operates in the 2.4 GHz range but uses an air-interface protocol that complies with both the ISO 24730-2 RTLS and IEEE 802.11b Wi-Fi standards. The WhereNet interrogators already in place at the ports, as well as those newly installed for the Clean Truck Program, can read both the WhereTag III or IV transponder.

Aside from completing the installation of the hardware infrastructure, the other major element PortCheck needs to establish is a means of automating the steps for identifying each truck, and for charging the cargo owner with the appropriate Clean Truck Program fee. To accomplish this, PortCheck partnered with eModal, a database management firm for the transportation industry. Emodal's services are already utilized to register trucks for the PierPass program. To deploy PortCheck's services, eModal had to customize the SQL database so it could hold—in addition to the vehicle's tag ID number, truck license plate and driver info—the model year and type of engine it contains. This step allows a single database to contain the master data for both PierPass and PortCheck.

Field-testing of the new readers is presently underway, Wargo says, and the database customization process is nearly complete. On Nov. 10, the electronic gate reader system for PortCheck is slated to go live at both ports. As of that date, container terminal operators will turn away concession trucks lacking RFID tags. And starting on Nov. 17, the Clean Truck Program fee collection will begin at both locations.

According to Wargo, being able to reuse the RFID tagging and reader system already deployed for the PierPass program shows how versatile radio frequency identification technology can be for end users. "They can be applied for many uses," he states. "It just takes someone to think them up."

For more information regarding the benefits of extending RFID technology infrastructure, see When the Going Gets Tough....