Smartrac Sees RFID’s Future in the Cards, the Clouds and the Cosmos

The company is working with Cartamundi to embed NFC tags in game and trading cards, and has also released Smart Cosmos, a cloud-based platform, with the expectation that more objects will be tracked as part of the Internet of Things.

May 04, 2015RFID and Near Field Communication (NFC) tag and inlay producer Smartrac is partnering with playing cards company Cartamundi to develop an NFC tag that is small, thin and cheap enough to be embedded in standard cards, such as sports trading cards, playing cards and game cards, that could be used to connect users to Internet-based games. Cartamundi expects to begin offering NFC-enabled cards with the new technology by the end of the year. Smartrac announced the partnership, as well as the release of its new software-as-a-service (SaaS) solution Smart Cosmos, at the RFID Journal LIVE! conference and exhibition, held last month in San Diego, Calif.

Cartamundi already makes some NFC-enabled cards for use in casinos, most commonly to enable a casino's software to identify cards during tournaments, explains Tom Kestens, Cartamundi's press officer. Poker tournaments are often aired online or are televised for audiences, and information about the cards in play during poker games is displayed for viewers. Since the cards are played facedown on the table, casinos have traditionally placed cameras under glass tabletops to identify each card. Now, some casinos are using the NFC chips built into Cartamundi playing cards to accomplish the same task. These, however, are not standard cards, Kestens notes. The NFC RFID chips on the market are currently too large to be built into standard-sized playing cards, he explains, so special cards must be made. Although a regular deck of poker cards sold to consumers would typically not employ NFC technology, trading cards and cards intended for online gaming would. 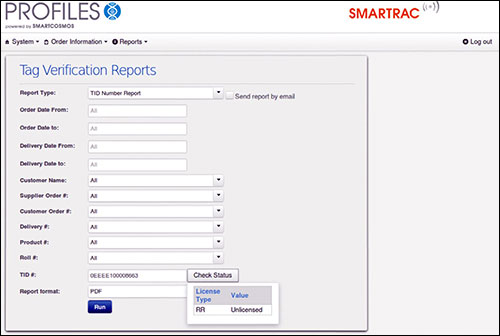 Cartamundi and Smartrac aim to make such cards easily NFC-enabled as well, by creating an NFC chip that is thin enough not to be detected in paper, and cheap enough that Cartamundi could make the cards affordable to consumers. Existing NFC tags "are way too expensive to use in plain playing [or trading] cards," Kestens says. "For us, it's all about bringing down the bar to make the technology available to everyone." He adds, "Our ultimate goal is for the most flexible, thinnest and cheapest NFC chip in the world."

Smartrac is working to make that happen, according to Mikko Nikkanen, the company's electronics and gaming global director. Smartrac's goal, he says, is to develop a tag that could be embedded in any standard-size card (Cartamundi sells approximately 15 billion cards annually, including playing cards, trading and collectible cards, and cards used in digital gaming). The new chip could bring NFC capability to both packaging and cards, Kestens says, adding that Cartamundi expects the new, smaller chip that will result from the partnership to be useful for other companies in other industries as well.

Smartrac is pursuing NFC not only for televised poker games, but also to enable users to access games online by tapping a collectible or trading card against their NFC-enabled phones. Users could also physically share or trade collectible cards for digital gaming with friends. Each card's RFID tag ID number would be stored along with data regarding the level of game play attained by that card's owner, Nikkanen explains.

Cartamundi envisions casinos using NFC-tagged cards during poker tournaments to prevent cheating. The company also believes that RFID tags could be embedded in trading cards—including those for sports athletes or other collectibles that are traded among friends—to track where a card has been around the world. (By tapping the card against a smartphone, an individual could add his or her own location and then trade that card with a friend.) In collectible-card games, players often battle each other with creature cards. The creatures' abilities change based on a dice roll. However, if data were stored inside a card's NFC RFID tag, that card would be able to carry a history and "personality" that other players could then access using their NFC-enabled phones. For instance, players can name and train their creatures, which can then "level up" and do battle, and they can either take advantage of training or sustain damage, die or be revived.

In addition, with NFC-tagged cards, players would no longer need to be in the same room in order to battle each other. Instead of using a game board, players would utilize NFC-enabled phones to read those cards' RFID tags, and all of the action would be conducted via the Internet. The only physical aspects of the game would be the cards and the phones used to read their tags. "A huge challenge for game designers, when including technologies, is that they often hinder or interrupt the natural game flow," Kestens states. "Cards with NFC can be recognized instantly and automatically in the background. Players can just play the game."

Smartrac has also been expanding its product offerings to include a software platform known as Smart Cosmos, which has been in beta testing since late 2014. The software will be offered for pilots and permanent deployments within two to three months, according to Jason Weiss, Smartrac's cloud platform and applications corporate technology VP.

The Smart Cosmos software platform, the company reports, is designed to make it easier and less expensive for systems integrators, IT departments and software engineers to create their own solutions for connecting RFID-based physical objects to the digital world via a cloud-based server, using Smartrac inlays. Rather than purchasing and integrating software, they could use Smart Cosmos to build a system specific to their needs.

One of Smartrac's Smart Cosmos offerings is a cloud-based solution called Profiles, which is intended to enable supply chain monitoring for a monthly fee. This system is currently available to Smartrac's existing customers. Another Smart Cosmos product, known as Objects, is available only as a free "Developer Edition" hosted at the AWS Marketplace, and serves as a repository for data collected from sensors and RFID tags.

The system is designed for a variety of sectors, the company reports, including retail, industrial, government and finance.

FineLine Technologies announced, in November 2014, that it would be building the Smart Cosmos platform into its QCTrak RFID-based application. The company "is currently in discussions with two major retailers, both of whom are moving to RFID source-tagging programs," says George Hoffman, FineLine Technologies' CEO. Leveraging the Smart Cosmos platform, he adds, FineLine's QCTrak application is designed to collect, store and manage cloud-based data that can be shared with members of the supply chain, from the point of manufacture to stores, via mobile devices.

Users deploy an Apple iPhone (running the QCTrak app), with an ultrahigh-frequency (UHF) RFID reader paired to it, to capture and store data regarding an RFID-tagged product's movement or status. "The solution can be used by retailers to conduct in-store RFID tag audits," Hoffman says, adding that it "can be used anywhere in the supply chain, and can be easily used by suppliers at the point of manufacture."