Nov 10, 2006"RFID has become an essential productivity tool in nearly every sector of the Canadian economy." Thus said Richard Simpson, director general of electronic commerce for Industry Canada, the Canadian government's economic development and innovation arm, during an opening keynote address at RFID Journal LIVE! Canada on Tuesday evening in Toronto. This sentiment became clear throughout the conference, as end users, academics, researchers and RFID vendors all shared experiences and insights they've gained while testing RFID over the past few years.

EPCglobal Canada, which cosponsored the event, announced that it and its U.S. counterpart, EPCglobal US, are in the final stages of negotiating a merging of the two organizations into a single entity to be called EPCglobal North America. EPCglobal and its national member organizations are working to commercialize electronic product code (EPC) and RFID technology through the development of standards. 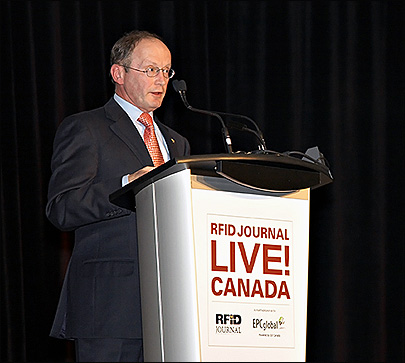 Richard Simpson, one of the speakers at RFID Journal LIVE! Canada.

The reason for the move toward a single North American EPCglobal organization, said Arthur Smith, president and CEO of EPCglobal Canada, is to combine the two organizations' support services for RFID development in both nations.

EPCglobal was launched by GS1, an international industry group that sets standards and policy for the global supply chain. GS1's Canadian arm, GS1 Canada, announced last month that it had formed a public policy forum, in part to define issues regarding RFID, as well as to provide RFID-related information to Canadian companies working with retailers (including Wal-Mart Canada) and technology vendors (see Major Companies Establish Canada Public-Policy Forum).

The Public Policy Forum contains working groups that study consumer-privacy issues related to RFID and the technology's impact on human health and the environment. These are issues being considered not only in the Canadian government, but also by academia.

During the conference, Toronto-based McMaster University announced the opening of its new McMaster RFID Applications Lab (MRAL). The 1,100-square-foot center was the brainchild of Pankaj Sood, who, as a graduate student, identified the need for a center of RFID learning and technology testing that could serve both academics and Canadian industry. The lab contains RFID testing equipment and offers RFID system design and testing services. It also provides RFID information and project-consultation services.


In developing the center, Sood—who now serves as the center's commercialization manager—said he wanted to be sure discussion of the public policies surrounding the use of RFID would be central to the lab's work. He asked representatives from the Office of the Privacy Commissioner of Canada to participate.

"All RFID labs are doing collaborative research, but most are brushing policy issues under the carpet," said Sood. Speaking at a press conference to announce the lab, Melanie Miller Chapman, strategic analyst with the privacy office, said that working with the lab will enable the office to bring questions to the fore about how RFID technology will be deployed and how it may track and store personal information.

Not facing tagging mandates from retailers or government agencies, Canadian firms are pursuing RFID on their own timetables, with a concentration on deploying the technology for internal benefits. Conference attendees are pursuing a diverse set of applications, from using RFID to improve their companies' internal inspection processes or track the maintenance histories of their assets, to tracking the temperature of perishable goods in transit.

Still, Canadian consumer-goods suppliers may not always have an open-ended timeline for deploying the technology. Carolyn Walton, vice president of Wal-Mart's Information Systems Division, would not comment on whether the retail giant will begin requiring suppliers to tag shipments headed for Canadian stores. However, she did say the retailer is building its Canadian deployment using the same model developed for the United States. For now, that means piloting the technology at a number of Wal-Mart stores and a distribution center in Canada.

Walton told attendees that Wal-Mart Canada has identified some suppliers it would like to participate in the pilot, and that several companies have already volunteered to be involved. Approximately eight suppliers have signed up for the pilot thus far, she said. In June, the company anticipates a total of approximately 16 participants (see Wal-Mart Canada Plans Its First RFID Pilot).

"At this time next year," Walton told attendees, "Wal-Mart Canada will be making plans for the next phase of the rollout." Wal-Mart Canada, she explained, is interested in testing RFID technology to see if it can reduce product out-of-stocks, increase inventory visibility and improve promotional campaigns for new or featured products.