The system, developed by Pacific Northwest National Laboratory, is being tested by Baker Hughes to monitor the location and usage of such materials.

May 18, 2015Following approximately 18 months of development and testing, the Pacific Northwest National Laboratory (PNNL) is proceeding to field pilots of a system to wirelessly and automatically track radioactive materials used in oil well drilling to ensure that they do not end up in the wrong hands.

PNNL, located in Richland Wash., is one of 17 U.S. Department of Energy research facilities in the United States aimed at finding energy solutions, among other goals. In 2004, the National Nuclear Security Administration launched an effort to identify, secure, remove or manage the disposition of high-risk vulnerable nuclear and radiological materials. This project is currently funded through the National Nuclear Security Administration's Global Material Security, Radiological Security Program. 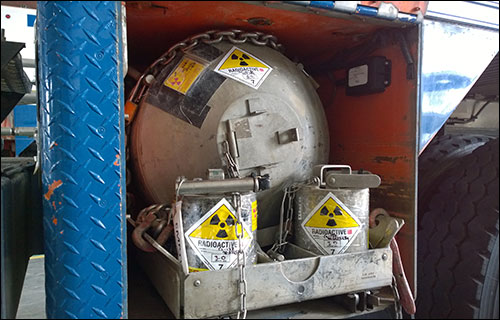 An rTag and an MCU (shown here mounted on the upper right wall of a storage compartment on a Baker Hughes wire-line well-logging truck) verify the presence of three tagged shielded sources and measure the amount of radioactivity they emit.

Such materials are used by the oil and gas companies, which employ a process known as wire-line well logging, requiring the use of radioactive sources—sealed in metal containers—to characterize a well and predict its ability to produce oil or gas.

The radioactive sources, which are transported from a vault at a regional home base to these well-logging sites, are vulnerable to theft by terrorists, or to other damage or loss during transportation or use onsite. Therefore, in 2014, PNNL launched a project to develop the system, known as Mobile Source Transit Security (MSTS). The project has led to the development of a solution that uses RFID and satellite communication technologies, along with sensors, to track the radioactive sources.

At the well-logging sites, oil and gas companies drill into the ground and, after removing a neutron or gamma source from its protective shield, use a wire line to lower it down the drill hole to identify rock formation patterns, and the presence and size of porous formations. Companies can use the neutron source (Am-241 Be) to help them identify the presence of hydrogen-containing compounds, such as oil, gas and water, by analyzing the return backscattered neutron emissions from the well. They can use the gamma source (Cs-137) to help them determine the density and porosity of the surrounding material, again by analyzing the backscattered gamma emissions. A wire-line well-logging truck delivers the sources and tools, as well as the lines that drop the source into the hole. When the testing process is over, each source is returned to its shield in order to reduce the amount of radioactivity emitting from it, and the truck takes it back to its vault.

The truck driver may need to transport the sources a long distance. Because the trip could take several days, the driver could, in some cases, park the truck at hotels overnight, as well as at other sites of fueling or rest stops. The sources' security becomes vulnerable at such times.

PNNL began looking into technology solutions to create an automated system of tracking the material from the vault to the drill site and back. It worked closely with Baker Hughes, the oil and gas services provider that transports the sources.

Burghard recalled that when the lab research team asked Baker Hughes what its priorities were, the company indicated that they were security and a low-cost solution. The firm sought a system that would cost less than $1,000 per vehicle. In fact, Burghard says, the lab was able to deliver a solution in that range. The oilfield services company also wanted the technology to be available in the form of a kit containing all of the equipment that could be easily installed. 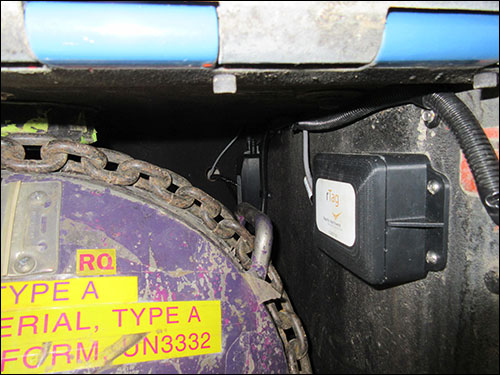 The resulting solution features an active tag (known as an eTag) that is attached to the source's shield and transmits a 2.4 GHz signal using the Bluetooth Low Energy (BLE) protocol. A PNNL-developed device called a master control unit (MCU) receives the eTag's signals and, in turn, sends that data to a Geoforce GT1 asset-tracker device, which uses satellite communications to forward that information, along with its GPS coordinates, to a server. The responsible engineer then uses a phone or tablet to view data about the sources on a server, via an Internet connection.

Each source is packed in a shield to reduce the level of its radioactive emissions while in transit or storage, and an eTag is attached to that shield. Every eTag transmits a unique identifier linked to that source in the MCU. Initially, a prototype of the tag had a built-in 433.92 MHz active RFID transponder transmitting via a proprietary communications protocol. However, Burghard says, that was changed as the eTag was developed, to a 2.4 GHz BLE transmitter. There were several reasons for this, he explains.

For one thing, Burghard says, the oil and gas industry tends to prefer the use of low-power RF transmitters operating at frequencies above 500 MHz, to reduce the potential risk of interference with electronic detonators used by the industry. In addition, he explains, well-logging companies such as Baker Hughes prefer to employ an industry-standardized communication protocol instead of a proprietary one, in order to reduce costs and ensure long-term product support. "Even though we are now using BLE, we still consider the eTag an active RFID tag," he notes. "We are using the BLE module's MAC address to provide a universally unique ID per tag."

The tag transmits its MAC address at regular intervals. Once the source is loaded into the truck, that signal is received by the MCU mounted in a compartment on the vehicle in which shielded sources are stored. The MCU also has a wired radioactive sensor, called an rTag, which measures the level of radioactivity within the truck. It is expected that the level of radioactivity inside the vehicle's storage compartment will rise a limited but safe amount when the source is present.

If the radioactivity is not present, there could be a problem, even if the tag continues to beacon, since that could indicate the source has been removed without authorization. This is unlikely to occur, however, due to a level of redundancy in the system. The eTag has a built-in tamper-detection sensor, so although someone could remove the tag from the source's shield, and then take the shielded source, the removed tag would continue to transmit its ID, as well as a status alert indicating it had been tampered with. That information, coupled with the absence of radioactivity as measured by the rTag sensor, would signify that something such as a theft had taken place.

The rTag can detect whether the amount of radiation present is below an expected threshold (indicating the source is absent), as well as above it (indicating the source may be out of its shield). If a company determines that the radioactivity has been higher than normal for an unexpected period of time, it can alert the driver that the source seems to have been removed from the shield for too long. 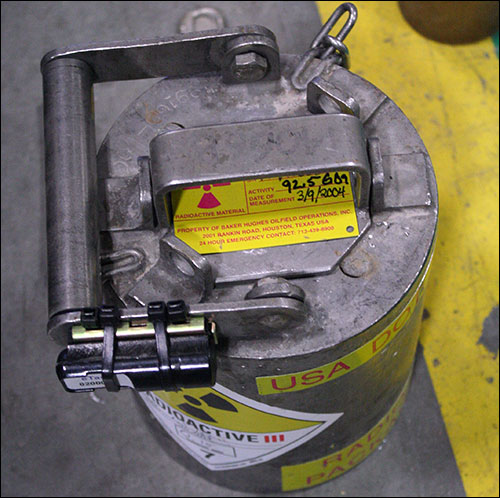 A shield source, fitted with an eTag

Drivers or engineers at the well-logging site can use their phone or tablet to view the source's radioactivity level. This also helps them to identify if the source was taken out of its shield, as well as verify that the source is still present in the truck after each time the vehicle stops. They can access the data by logging onto the MCU's access point using a Web browser, rather than using a native app for their particular phone model. "We decided against a native app," Burghard says, since that would require writing the app for Android, iOS and Blackberry devices, all of which are used by some individuals in the field.

According to Silvers, the eTag and rTag are both low-cost, battery-powered devices designed for use in harsh environments, incorporating off-the-shelf components. The eTag can also perform a state-of-health check on itself and transmit the results to the MCU. "About 95 percent of the parts for both the eTag and rTag are procured from electronic component distributor Digi-Key," Silvers says. The cases were designed and manufactured by R&B Designs.

Geoforce provided the firmware used on the MCU to forward eTag and rTag data, and also supplied the software on its cloud-based server that forwards information to the end user, the well-logging company.

PNNL has been conducting tests with the technology installed on two wire-line trucks for about one year. The lab is now entering into a pilot stage of the project, in which Baker Hughes will begin using the data provided by the system to identify the locations of sources inside the vehicles, as well as any changes in radiation levels surrounding those sources.

In the long run, PNNL hopes to offer the solution to companies that transport radioactive sources or other radioactive material across the United States. "Preliminary estimates," Burghard says, "were that there may be as many as 10,000 trucks that would benefit from this technology."