Aug 25, 2016The following are news announcements made during the past week by the following organizations:
Fujitsu, GlobeRanger;
ABI Research;
HID Global;
SML; and
NFC Ring.

Baker Hill Industries, a supplier of precision machined components to the aerospace, defense, medical and commercial industries, will soon deploy an RFID-based solution from GlobeRanger, a Fujitsu company. According to GlobeRanger, Baker Hill Industries will use the solution to track the manufacturing of steel components, and will also give the manufacturer greater visibility into its supply chain and production processes, as well as provide it with real-time information to help it improve business decision-making.

Baker Hill Industries is implementing GlobeRanger's Internet of Things platform to add IoT capabilities to its end-to-end manufacturing process—from initial ordering through to the shipping of finished components. It includes a Fujitsu workflow planning and tracking system so the manufacturer can pinpoint the exact locations of all components at any given moment as they progress through its manufacturing facility.

The IoT insights can be shared with customers and suppliers to more effectively manage inventory and plan future orders, GlobeRanger says. Since Baker Hill is manufacturing high-precision components for highly complex products, such as jet and rocket engines, the company wants to extend the availability of real-time tracking information to its customers, who typically require the on-time delivery of parts as they coordinate orders from multiple suppliers.

The new system is replacing manual tracking processes that have not kept pace with the manufacturer's growth in the number of parts it processes. Baker Hill's objective, GlobeRanger reports, is to eliminate human error by deploying an automated system. The GlobeRanger iMotion platform draws data from a wide range of sources throughout the production process, the company indicates, to provide new insights into customer operations, thereby enabling improved short-, medium- and long-term planning based on more reliable data.

According to Mark Brown, GlobeRanger's director of business development, Baker Hill Industries will use passive ultrahigh-frequency (UHF) RFID tags, and plans to have the system up and running by the end of next month. Each production station at its facility in Coral Springs, Fla., will feature a visual display showing its performance status, with red, yellow and green lights that illustrate whether or not an operation is performing to expectations. This means that any issues can be identified immediately and a remedy can be found rapidly, Brown explains, without affecting completion times.

"We typically have multiple status calls with customers every week. By giving them access to the same tracking information that we use, they will have up-to-the-minute information about the progression of their products through the manufacturing process," said Matthew Ricci, Baker Hill Industries' president, in a prepared statement. "As we send some parts for processing externally, we'll be able to track them with our suppliers too. We will be able to monitor the lead times and compare them against what was quoted. This will assist us in refining our own timelines as agreed with our customers."

GlobeRanger's IoT solutions are available directly from Fujitsu in the Americas, Oceania, and the Europe, the Middle East, India and Africa (EMEIA) regions. Pricing varies according to configuration.

Use of Bluetooth Low-Energy (BLE) in retail stores has received a great deal of attention, but a new report, titled "BLE Beacon Technologies, Applications, and Revenues," from ABI Research forecasts that the amount of BLE beacon shipments for personnel tracking, Internet of Things, real-time location system (RTLS) and asset-tracking markets will easily surpass those in retail. The overall BLE beacon market continues to grow rapidly, according to the report, with shipments set to break 500 million units by 2021.

Specifically, in the IoT space, ABI Research expects to see BLE combined with low-power wide-area network (LPWAN) technologies to support large-scale deployments in smart cities. LPWAN—also referred to as lowpower network (LPN)—is designed to allow long-range communications at a low bit rate among connected objects, such as sensors operated on a battery. Another emerging trend is the shift to software-based beacons, in which vendors leverage integrated BLE ICs as beacons and virtual beacons, across a range of markets.

According to Patrick Connolly, a principal analyst at ABI Research, retail will remain a major market for BLE beacons, but there are market shifts currently under way. "Personal tracking is now the largest individual market of the group, with market leader Tile shipping over six million BLE beacons alone," he said in a prepared statement. "In RTLS/asset tracking, a range of new, high-accuracy BLE beacon technologies, designed specifically for this market, will offer a significant cost improvement on traditional technologies." The retail market is a big money generator in terms of overall revenue, he added, but the RTLS/asset tracking market shows huge potential.

While the competitive landscape largely remains the same, with the major BLE beacon vendors continuing to dominate, Sensoro recently broke the 300,000 BLE beacon shipment milestone and looks well-positioned to become a top three vendor, according to ABI Research. But startups developing proprietary solutions to meet specific market needs, in terms of accuracy and cost, are very promising, the research firm reports. Many are only just coming out of the beta stage, but ABI Research expects to hear a lot more about them, and perhaps some acquisition activity, during the next 12 months.

The new tag supports the UHF EPC Class 1 Gen 2, ISO 18000-6C, ISO 17364 and DIN 40050-9 specifications. The Ultra Mini measures just 2.4 inches by 0.7 inch by 0.3 inch (60 millimeters by 18 millimeters by 8 millimeters). It features a high-impact PC/ABS housing that makes it suitable for tagging roll cages, boxes, furniture or tools, the company reports. It can be mounted via screw or rivet, and can be affixed to all surfaces, including metal, plastic and wood.

The tag has a read range of up to 9.8 feet (3 meters) and has both IP-68 and IP-69K ratings. It is able to withstand exposure to mineral oil, petroleum, salt mist, vegetable oil and up to 80 percent humidity at 158 degrees Fahrenheit (70 degrees Celsius).

SML has announced enhancements to its Clarity RFID application platform to support iOS, Android and Microsoft Windows 10-powered mobile devices that are coupled to RFID sleds provided by Zebra Technologies.

SML Clarity is a software suite designed to provide retailers with visibility into stock availability to help reduce out-of-stocks, audit product shipments and deliveries, and report on stock-counting variance, as well as help retailers improve omnichannel execution at each store. Xamarin, Microsoft's mobile device software development product, serves as SML's development platform of choice for this next iteration of Clarity, the company reports. According to SML, the system supplies speed-to-market advantages and the ability to develop an application one time and then port the app to various operating system platforms easily and quickly.

This new version of Clarity has been ported over to iOS and Android devices working with Zebra's new RFD8500 RFID handheld sled reader. According to SML, it is engaged with multiple customers that are using the RFD8500 sled and, through extensive testing, is rated best-in-class. According to SML, the emergence of Bluetooth-enabled RFID sleds is a positive trend that gives customers maximum flexibility to add RFID capability, while preserving their investment in mobile devices.

In addition to the multi-platform developments, the new version is now multilingual. SML currently supports numerous languages, including English, Japanese, Chinese, Spanish, German and Dutch, on in-store terminals. All of these developments support the growing global demand for the return on investment that Clarity delivers to retailers.

"The consumer device market is gaining greater market share among retailers and Clarity is evolving to support the latest devices that retailers want to use as they migrate to RFID," said Dean Frew, SML's CTO and senior VP of RFID Solutions, in a prepared statement. "Clarity is already demonstrated itself to be the most scalable and feature rich RFID application platform for retail with over 1000 stores using every day processing over 5 billion transactions in 2016, this next iteration of Clarity maintains our march toward more flexible, higher performance and cost effective RFID deployments for retailers and brand owners."

NFC Ring Inc. has announced a Near Field Communication (NFC)-enabled payment ring that complies with EMVCo and is based on a contactless security chip from Infineon Technologies. The tiny, waterproof smart ring works like a contactless payment card, Infineon reports, and users can pay by simply holding their finger with the ring closely to any EMVCo contactless-enabled payment terminal. 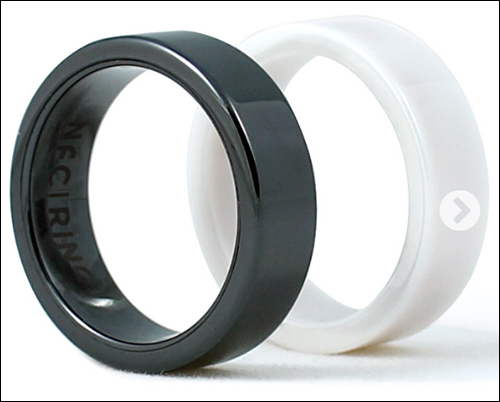 The new payment ring features the Infineon security chip and a passive contactless antenna. The Infineon chip communicates via the passive antenna with a terminal, triggering a secured payment with cryptographic processing. According to Infineon, the solution complies with timing requirements of a few milliseconds, while working at a distance of up to 4 centimeters (1.6 inches) from a reader.

In June, Visa introduced an NFC-enabled payment ring, backed by a Visa account, that was given to all Team Visa athletes for use at the 2016 Summer Olympics. The Visa payment ring enabled Team Visa athletes to make purchases by tapping their rings at any NFC-capable payment terminal. The ring used a patented NFC Ring design of McLear & Co., which includes a secure microchip made by French smart-card and digital-security company Gemalto, with an embedded NFC-enabled antenna (see Visa Intros NFC-Enabled Payment Ring for Rio 2016 Olympic Games).

"The Infineon security chip is the only solution available on the market, that allowed us to realize the NFC payment ring while still meeting EMVCo's toughest contactless performance requirements," said Shelly Silverstein, NFC Ring's COO, in a prepared statement. "NFC Ring users now have a secure and convenient, payment experience with a fashionable accessory in an attractive design."

"Our chip technology makes paying with smart wearables as functional as paying with the well-known bank card, but also much more convenient," Thomas Rosteck, the VP and GM of Infineon's Secure Mobile & Transaction business line, added in the statement. "Proximity payments based on NFC technology are clearly on the rise – and payment solutions with smart wearables will accelerate this trend with consumers not even having to reach into their pockets to pay."