RFID Keeps Floaters Out of Beverages

Global beverage companies are employing an HF RFID solution from Dorcia Engineering and Feig Electronics that detects if a piece of machinery called a vent tube breaks off, ensuring that it never ends up in a drink or delays production.

Mar 17, 2020A generation ago, this reporter's father brought home a six-pack of soda for a Fourth of July picnic. There was a surprise floating in one of the bottles: a long chunk of steel trapped in the carbonated beverage. Apparently, a piece of the bottling plant had found its way into the drink. This is a problem that bottling plants still face, but a solution is now available thanks to RFID technology. That piece of steel suspended in the soda was a vent tube filler, used to fill each bottle and vent out the carbonation-related gas. Occasionally, due to wear and tear, such tubes can fall off. In many cases, no one sees this happen.

Dorcia Engineering has partnered with Feig Electronics to build a real-time locating system (RTLS) for monitoring vent tube fillers used at bottling plants, via RFID technology. The companies will demonstrate the new solution at the RFID Journal LIVE! 2020 conference and exhibition, which will be held in Orlando, Fla., on Apr. 28-30. 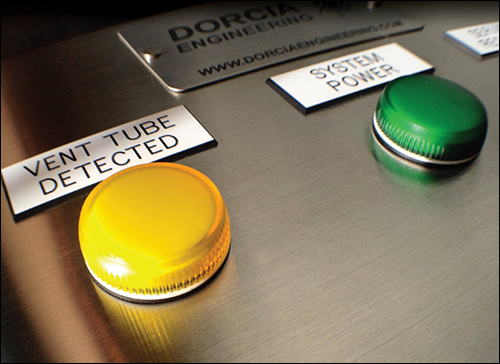 What likely happened with that bottled soda years ago, says Grant Cook, Docia Engineering's cofounder, is the vent tube malfunctioned, dropped directly into the bottle and was thus sealed inside by the bottle cap. What's more, he adds, the soda company probably experienced delays on the day it happened, as employees searched in vain for the missing vent, hoping to avoid shipping the faulty product to stores.

These days, such devices can be made of plastic. The beverage-bottling industry has put safeguards and processes in place to ensure that vent tubes never end up lost, especially in products destined for consumers. Such processes are time-consuming and expensive, however. First of all, there's the question of the sheer volume of products being packaged. The aluminum can industry alone produces 200 billion cans annually.

One million plastic beverage bottles are purchased every minute worldwide. Single-serve containers are the preference of consumers, driving that growing volume. To keep up with that volume, Cook says, beverage companies must employ high-speed automation. "They have multiple automated filling lines in those plants," he states, and the industry relies on that automation. A single bottle or can typically moves through the process at a speed of 4 to 6 feet per second, with production continuing 24 hours a day, 365 days a year. More than 2,500 bottles or cans can be produced within one minute on a single production line.

A production line typically utilizes 72 to 165 vent tubes that revolve quickly above bottles or cans. In fact, the containers themselves are in motion while they are filled. The vent tube is crucial to the bottling process, Cook reports, as it deposits the liquid and vents off carbon dioxide gasses, thereby ensuring that the container does not foam over or over-flow. This high productivity rate at beverage plants also means that shutting down a production line, even for a short span of time, leads to significant loss of productivity. "Even the slightest disruption can be a major problem," Cook states.

To prevent this from occurring, many companies voluntarily shut down their lines on an hourly basis in order to visually inspect the vents and ensure that they are all still intact. If one is found to be missing, a company may need to quarantine all products and have workers search for the vent. Some technology is available to address the problem, such as high-speed cameras, X-rays and lasers, but they come with shortcomings. Even though these systems may detect a vent tube breakage, they cannot uniquely identify which vent tube the production crews need to look for, or where it might be located.

Dorcia's high-speed RFID monitoring solution is intended to detect whenever a vent is missing from a production line in real time, Cook explains. With such a system in place, he says, companies can immediately identify the problem and reduce the loss of time and product. Additionally, the solution is intended to eliminate the manual hourly process of checking for the presence of vent tubes, as well as prevent product waste. The company's Filler Vent Tube Reader detection system consists of an RFID-enabled vent tube from Dorcia, along with readers and proprietary software hosted on a dedicated server, linked to the beverage production controls.

Dorcia was founded after a beverage company approached Cook with a problem facing that industry. Cook says he was an applications engineer at the time, and that the customer told him, "Grant, I lost a vent tube last night. You've got to help me solve this problem." As he recalls, Cook replied, "Great, what's a vent tube?"

Cook soon understood the problem and the inefficiencies around solving it, and he and his company's cofounders then devised, built and patented a solution using Feig technology that includes a hermetically sealed 13.56 MHz tag, compliant with the ISO 15693 standard, embedded in the head of every vent tube in each valve of the filler. Feig provides the RFID tags and reader, according to Mike Hrabina, the firm's global product marketing manager. Each tag's unique ID number, encoded on the chip, is linked to a specific vent tube so staff members can visually locate it in the event of a problem.

The system uses near-field HF transmissions, which Hrabina says "provides a well-defined detection zone." The solution allows for a short read range and is reliable around metal and liquids. The RFID reader is built into the production line between the infeed and discharge unit. As each bottle or can is filled, the tag is read and its data is captured in the software, thus indicating the system is functioning as it should. Feig customized the reader to capture the tags at a speed of 50 cans per minute and at close range, in order to prevent the stray reading of neighboring vent tubes. (Vent tubes are typically spaced about 3.5 inches from each other.) The reader then forwards the collected data to the software via an Ethernet cable.

In the event that a vent tube breaks or falls off, its specific tag ID will no longer be read and the software will thus issue an alert to the production operator indicating which vent tube is missing, as well as prompting the equipment to immediately stop. Workers can then proceed to the missing vent tube fixture and ascertain where it might have fallen off. A handheld RFID reader can be used to help locate the missing tube. If it cannot be located, they can look in the container last filled by that vent tube before it went missing. An electromagnetic device can scan cans already sealed.

Dorcia manufactures the RFID-enabled vent tubes at its Chicago facility. After the system was developed, piloting began in 2019. "We've been able to partner with some of the largest beverage company customers," Cook reports. The manufacturers, which have asked to remain unnamed, have indicated that the system improves efficiency, he says, by preventing the need to shut off production on an hourly basis so employees can check for problems.

The solution may also help them reach the goal of reducing waste, as well ensure that product manufacturing stops as soon as an error occurs so that beverages need not be discarded. "One of our core values is to keep the manufacturers as profitable and efficient as possible," Cook says. "We don't ever want to see them pouring product down the drain."