Peltz Shoes has developed its own item-level RFID system to track the 30,000 pairs of shoes at each of its Tampa-area stores, improving inventory accuracy and reducing inventory-related labor costs.

Jul 26, 2010Florida shoe retailer Peltz Shoes has saved approximately 1,500 man-hours in the past year by applying a passive EPC Gen 2 RFID tag to every box containing a pair of shoes at each of its four stores, and by employing an RFID-enabled cart to manage its inventory. But that's just part of the benefit, according to Gary Peltz, the retailer's co-owner. In the past 12 months, he says, the company has accomplished five complete inventory counts, consisting of around 30,000 pairs of shoes in each store, whereas previously, the counts were typically managed once annually or less often. This has led to a more accurate inventory, he says, ensuring that customers, whether in the brick-and-mortar stores or online, can purchase the shoes they want.

The family-owned Peltz Shoes, which has been in business since 1957, has increasingly been selling its wares online, and with the growth of that online business, the need for accurate inventory counts became more pronounced. After all, Peltz says, if a customer comes into a store seeking a pair of shoes that are not in inventory, the sales team can often sell that individual another pair of shoes instead. That isn't the case with online customers, however, who are likely to simply take their business elsewhere if the footwear they seek is listed as out-of-stock. In addition, Peltz—who says he has a penchant for organization and enjoys technology—has been eyeing RFID technology for some time to make the inventory process more accurate and reliable. 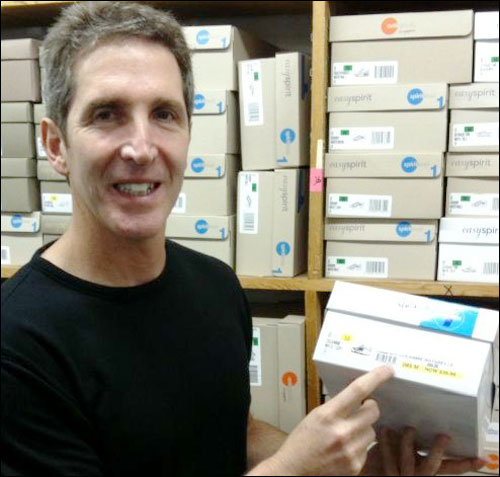 Gary Peltz points to an EPC Gen 2 RFID label attached to a shoebox.

The company, launched by Gary's parents, Bernard and Gonna, is expected to sell about 350,000 pairs of shoes this year, and is one of the largest shoe retailers in Florida. While working at the retailer's flagship store in St. Petersburg as a boy, Peltz says he was overwhelmed by a sales floor filled with row upon row of shelves packed with shoes categorized by women's and men's shoe styles, brands and sizes, noting that it could be difficult to search for a specific pair. He wanted a system that would not prove as daunting for the stores' staff.

At the same time, Peltz Shoes was looking into attaching to each shoebox a label printed with the specific brand, style, color, size and price of the shoes within, as well as a bar code that could be used by customers and the sales team to gain additional details about the shoes, as well as by point-of-sale workers to scan the shoes as they are purchased. That, Peltz says, would replace a system in which pricing and other product information was only provided on signage posted in the stores for each line of footwear.

The timing seemed right for an RFID solution, Peltz indicates, with RFID labels printed with the necessary price and description, as well as bar-coded Universal Product Code (UPC) and stock-keeping unit (SKU) numbers. In seeking the proper solution, Peltz says, the store also tested handheld readers to capture the unique ID numbers on each UHF EPC Gen 2 label, but found the read rate was insufficient for its needs.

Working with tag vendor Monarch, the company developed an RFID reader cart with an Alien Technology RFID interrogator and multiple antennas on a pole that rises 7 feet—tall enough to reach tags on boxes stacked on the uppermost shelves. As the cart is wheeled past a row of shelves on the sales floor, the reader captures each tag's ID number, and a screen on the cart displays a list of all numbers as they are being captured. The reader then forwards that information via a Wi-Fi connection to software developed by Peltz that receives the data, interprets the tag reads and transmits that information to the store's inventory-management software.


Typically, when new inventory arrives, the staff has already received the UPC numbers and descriptions of the items ordered. Receiving employees then utilize a Zebra Technology printer (there is one in each store) to generate an RFID label printed with the information and bar-coded UPC and SKU numbers on the front. A worker attaches the label to the shoebox, and the record is stored in the management system, thereby linking that data with a unique ID number encoded to that particular tag.

When full inventory of a store is conducted, the staff uses the cart to read all of the tags, after which the cart can then be trucked to the next store for its own inventory process. By having a more accurate count of what is in each store, Peltz Shoes can more appropriately replenish its stock, based on what it actually has on hand. With more accurate inventory data, the list of in-stock product on the company's Web site ensures that online customers can view precisely what is available in the stores. Once the order is completed, Peltz's staff receives the order, pulls the requested shoes from the shelf at one of its four locations, and then packs and ships the requested footwear to the online customer.

The shoes' RFID tags are not currently being read at the point of sale at any of the retailer's four stores, though Peltz indicates that his company is considering doing so in the future. However, he says, "that is a dream" he has discussed with programmers—though he has yet to find software that would work properly for that application.

For online customers, the system provides an up-to-date list of available merchandise. As such, they can be assured that if a pair of shoes is listed as being in stock, it actually is, and can thus be shipped to them immediately.

There have been some shortcomings to the system, Peltz says, and the technology does not yet provide everything he envisions it could. For example, he notes, although the read rate is above 99 percent, the failed tag reads are still a problem. "There tend to be times when tags don't work," Peltz states. "The computer says there should be two pairs [of a specific shoe], but the inventory count says there is only one." In that case, employees need to go back and read the tags, replacing any that isn't being properly read.


In the future, Peltz hopes to add several functions to the system, one of which is the ability to see, in real time, what is available in each of his company's four stores, as well as detect when a pair of shoes has been incorrectly shelved. If, for instance, a pair of women's shoes is shelved with men's footwear, he would like to be able to receive an alert from the reader or back-end software indicating the problem.

Peltz also envisions using a handheld reader that can be programmed to seek a specific pair of shoes, and then be waved across the shelves by a worker until that device detects that specific RFID number and emits an audible alert. That function, he says, he hopes to make possible with some changes to the software and the acquisition of a handheld device.

What's more, Peltz hopes to eventually use the system for security purposes, receiving a real-time alert if a box or case of shoes is carried through an RFID portal out of the store, listing exactly which merchandise is being removed.

Although it is difficult to quantify the return on investment to date, Peltz estimates that he has recouped his investment within the first year of the deployment. Since the tags are priced at 11 cents apiece, he says, this costs his company an average of $40,000 to $50,000 each year. Even with the added expense of the reader, he says, the increase in merchandise sales easily surpasses the overall outlay. "And that's not even calculating the more satisfied customer," he notes, "because the shoes they want are available, and the labor cost of doing inventories. There's a lot of cost with the system, but there is a lot of savings. We feel like we've reached an ROI."

Other retailers seem to have similar feelings about the benefits of attaching RFID tags to the items they sell, according to a recent study conducted by the Aberdeen Group (see Momentum Is Growing for Item-Level Tagging, Survey Says). And Wal-Mart Stores recently shifted its focus from tagging all pallets and cases to working with suppliers to tag items in categories in which the company and its partners will see the greatest benefits (see Wal-Mart Relaunches EPC RFID Effort, Starting With Men's Jeans and Basics).