The United Kingdom is offering some public events, including a 3,000-fan pop-up concert by Liverpool event manager Circus, where masks were left at home and social distancing was non-existent, but all attendees were pretested for COVID-19 and used a touch-free payment process with RFID wristbands and kiosks from Festicket.

May 28, 2021As the United Kingdom eases its pandemic-era lockdown, Liverpool event manager  Circus has undertaken an unmasked, non-socially-distanced program relying on pre- and post-event COVID-19 testing, as well as cashless payments via HF RFID technology, to provide a level of safety for those working at and attending the pop-up music event. Britain's first government-approved pilot of maskless indoors entertainment was held on Apr. 31 and May 1 at Liverpool's  Bramley-Moore Dock warehouse.

The event consisted of 3,000 people per day, who danced, drank and enjoyed music together with few restrictions. The opening was part of England's Events Research Programme, established to determine how events can be safely reopened during the pandemic. Most U.K. residents under the age of 40 had not yet been vaccinated by the date of the Circus event. Therefore, multiple measures were in place for the show, beginning with a required COVID-19 test for all ticket holders before they would be granted entrance. 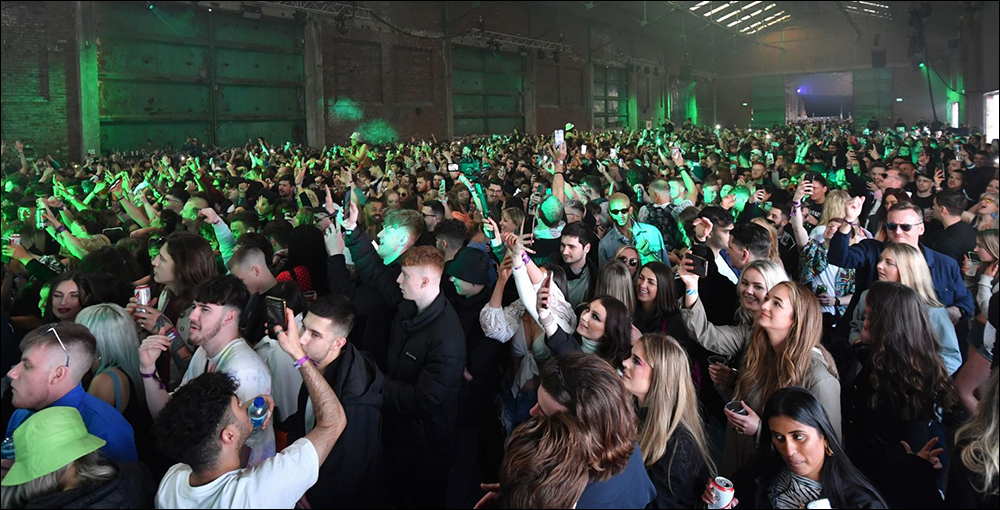 Partiers react on the dance floor as nightclub Circus hosts an event for 3,000 clubbers.

The site featured hand sanitizers, screens at point-of-sale terminals, masks for employees, and an RFID-based cashless payment system provided by  Event Genius, to prevent queues and the handling of money. Altogether during the two-night span, 6,000 music fans from throughout the Liverpool City Region attended the concerts to see Sven Väth, Fatboy Slim and The Blessed Madonna.

Everyone who bought a ticket, as well as all employees, committed to taking two COVID-19 tests, one before the show and another five days later. A negative test result was required to enter the venue. Onsite, the show looked more like a pre-2020 concert. There was no social distancing in place, and no masks were visible among the attendees. Everyone wore a purple wristband, however, which stored the funds they needed to buy drinks throughout the evening, according to Reshad Hossenally, the chief supply officer of  Festicket, Event Genius's parent company.

Users made purchases online and prepaid for drinks at the club via a credit or debit account. Upon arrival onsite, they presented a barcode as proof of a purchased ticket, after which they were issued a wristband with a built-in HF RFID 13.56 MHz Mifare chip compliant with the ISO 15693 standard. The cash credit was written to the bracelet, as well as stored in Event Genius's cloud-based software and linked to the wristband's unique ID number.

A general view of the dance floor during the public event.

When attendees proceeded to the bar for a drink, they placed their order with a bartender, then used one of approximately 80 Event Genius contactless terminals to tap their wristband. The reader captured their tag ID, which was linked to their credit account, then deducted the cost of the drink. Data was written onto the band and stored in the cloud-based server. In that way, if the system went offline, the wristbands would continue to enable payments and track deductions. That is a standard feature Event Genius provides for such evens, Hossenally explains. "There's always a risk of something happening with pop-up events," he says, "so having that offline backup is key" to ensuring uninterrupted service.

If, at any point during the concert, users wanted to add funds to their credit balance, they could simply visit one of Event Genius's self-service Top-up kiosks. There, they would tap their wristband where instructed, and the HF RFID reader built into the kiosk would capture the tag ID linked to their ticket and prepaid account. The touch screen would then display payment amount options, and they could select a specific amount—£20 ($28.40), for instance—then present their mobile phone or contactless credit card to the payment reader. At the end of the evening, if they had not spent all of the funds, users could claim the remaining balance to be returned to their account.

The program served as a practice run for the United Kingdom, and the company says preliminary data from the program has found that with screening, improved ventilation and other mitigating factors, the risk of virus transmission can be significantly reduced. By eliminating long lines associated with a traditional payment system, Hossenally says, the technology greatly reduced infection risk. But his key concern was the potential for transmission if individuals had been exchanging cash. 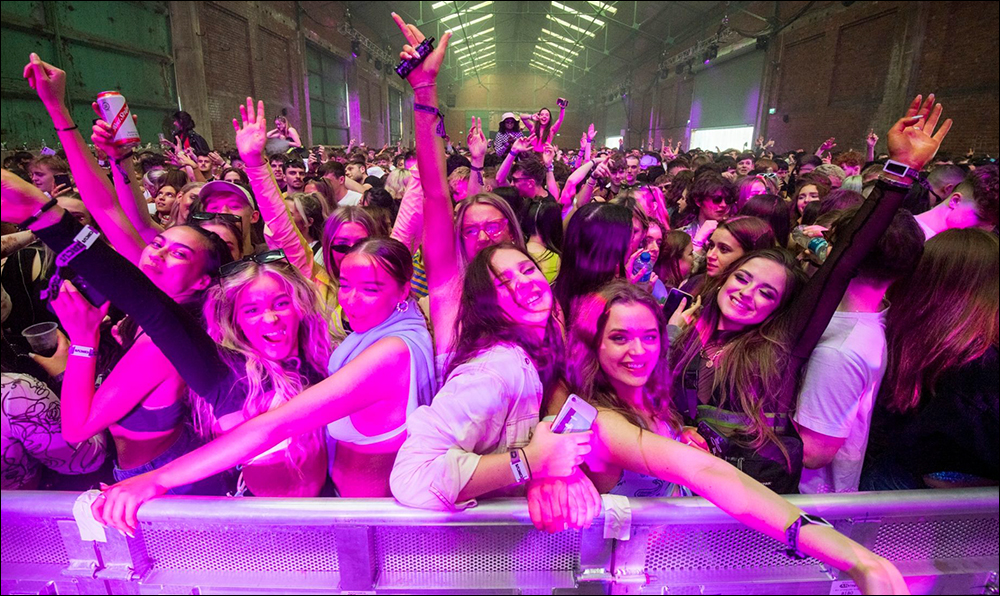 Excited clubbers return to the dance floor despite the pandemic.

"The important part was removing cash for hygiene purposes," Hossenally explains, noting that even with a negative COVID-19 test, users could be carrying contaminated cash that could be transferred to someone handling those bills. (Both the  World Health Organization and the  Centers for Disease Control and Prevention have determined that the principal mode for virus transmission is through respiratory droplets; infection can be passed by the contaminated surfaces of objects, but at a much lower risk.)

Altogether, the system included 80 payment terminals, as well as four Top-up kiosks and 10 manned sites for payments. Hossenally attended the concert himself and found that fewer terminals might have served the audience, but Event Genius and the organizers had chosen to err on the side of caution and provide a large number of terminals. "It was great to see people happy and smiling again," he recalls. "The trial was key to kickstart the reopening of the events industry. It was a sign of events getting back on their feet."

Event Genius is currently in conversations with several companies to provide contactless payments for some largescale concerts now in the works throughout Europe. In the future, Hossenally says, the RFID-enabled payments company may offer a new feature by which concert or event attendees could use their mobile phones, as well as Event Genius kiosks or terminals, for NFC-based payments or access control, without requiring the wristband at all. 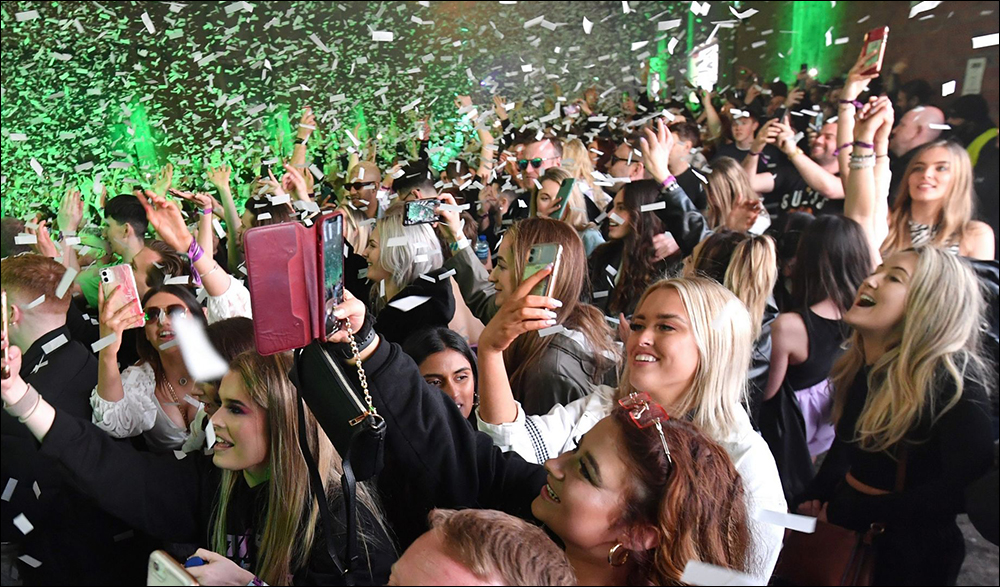 Confetti is fired into the crowd during the dance festival.