The company says its RFID-enabled poker table and cards make it easier for casinos, clubs and TV-production businesses to offer spectators a glance into players' hands.

Jan 07, 2011Pokertronic, a firm that offers services and solutions enabling the filming and broadcasting of live poker tournaments, is selling an RFID-enabled poker table that, according to the company, makes it easier for casinos, poker clubs and television-production businesses to provide spectators with a look into the hands of match competitors.

The so-called Pokertronic table was used to broadcast live matches in October 2010 at the European Poker Championships, held at the Grand Casino Baden, near Vienna, Austria. Sales of the table are slated to begin early this year. 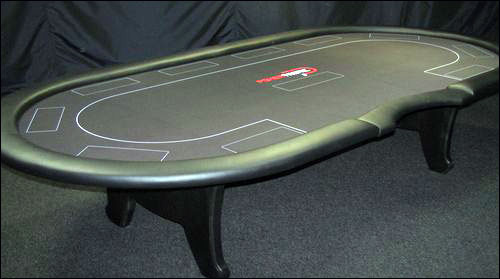 One 13.56 MHz RFID reader and 11 reader antennas are incorporated into the Pokertronic table.

"Our goal was to produce a high-quality Internet broadcast of the final tables," says Edgar Stuchly, Casinos Austria's poker manager and the organizer of the Casinos Austria Poker Tour (CAPT). "The RFID technology guaranteed accurate production. The players and I were thrilled about the way it worked."

Selling for €7,500 ($9,760), the Pokertronic RFID table is a retrofitted wooden and leather poker table that can accommodate 10 players. One RFID reader and 11 reader antennas are incorporated into the table, and each playing card is embedded with a passive 13.56 MHz RFID tag containing an NXP Semiconductors Mifare RFID chip. The tag is flexible, and does not change the feel of the playing cards, according to Uwe Kerscher, Pokertronic's CEO. The company resells the RFID playing cards, which it purchases from a playing-card manufacturer.

Poker has experienced a boom recently, due to live television and online broadcasts of matches in which spectators know more about the state of play than do the players themselves. To show a player's hand, TV crews had to arrange games on tables with glass tops, with cameras mounted underneath. Configuring each camera was time-consuming, Kerscher says, and outfitting tables with multiple cameras was costly.

With RFID, Kerscher explains, the process of filming matches for live broadcast was made simpler. The reader beneath the table interrogates the cards' tags and transmits the information saved on those tags to the computer system. This includes each card's face value and suit, such as the queen of diamonds. The encrypted data is fed into software created by Pokertronic, to evaluate the cards and generate a graphic illustration of each playing hand, much like those seen on televised sports events.


Kerscher, a software designer and IT specialist, says he launched the company Pokertronic in order to offer his services of producing live poker shows. When he discovered that radio frequency identification could make his job easier, he began developing the Pokertronic table for sale. "RFID is the best technical solution for digitalizing the cards," he states.

Kerscher declines to reveal which company is providing him with RFID readers and reader antennas for the Pokertronic tables, since it took him a long time to find a firm that could offer the proper hardware necessary to provide players with confidence that opponents could not cheat via the system.

"Poker is played for million-dollar purses," Kerscher says. "People are scared that someone could read their cards electronically, or program their own software to find out their opponent's hand."

Earlier this year, news reports said that a German poker player was disqualified from a tournament in Cannes, France, for allegedly cheating. A team reviewed video footage of the match and concluded that individuals posing as journalists and bloggers had signaled the player about his opponents' cards.

According to Kerscher, poker attracts players who will do anything to win, which is why he outfitted the Pokertronic tables with RFID technology with a maximum read range of 10 centimeters (4 inches).

Pokertronic, based in Regensburg, is a joint venture with AniMazing GmbH, also located in Regensburg. AniMazing provides gaming products, such as billiard and foosball tables, as well as darts and poker products. One of the firm's online marketing arms, Gambler's Store—which calls itself Europe's largest specialty supplier of casino and poker articles—will market the Pokertronic table.

AniMazing also rents Pokertronic tables as part of a package of Pokertronic event-production services. With the combination of hardware and software he created, Kerscher says he is able to produce and show a film of a game in real time, with no post-production work necessary. Recorded games can be viewed at a later date, or burned onto DVDs and handed out as souvenirs to players or spectators.