RFID technology has only recently begun to be used in consumer applications, but there are many potential benefits.

One of the first consumer applications of RFID was automated toll collection systems, which were introduced in the late 1980s and caught on in the 1990s. An active transponder is typically placed on a car’s or truck's windshield. When the car reaches the tollbooth, a reader at the booth sends out a signal that wakes up the transponder on the windshield, which then reflects back a unique ID to the reader at the booth. The ID is associated with an account opened by the car owner, who is billed by the toll authority. Consumers spend less time fumbling for change or waiting on lines to pay their toll fee. 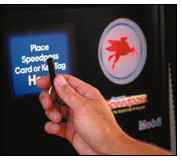 In the late 1990s, ExxonMobil (then just Mobil) introduced Speedpass, an RFID system that allows drivers who have opened an account to pay for gas automatically. Drivers are given a small, passive 13.56 MHz transponder in a small wand or fob that can be put on a key chain. To pay for gas, they just wave the key fob by a reader built into the gas pump. Seven million people in the United States use the system, and it has increased the number of cars each gas station can serve during rush periods.

MasterCard and Visa are experimenting with RFID to give consumers the convenience of paying for small purchases with a wave of a contactless smart card or key fob. NCR, Verifone and other companies are selling mag-stripe credit card machines with a built-in RFID reader. There is an international standard for secure RFID payments (see A Summary of RFID Standards), but there isn't a single network infrastructure that would allow someone to use one RFID key fob or card to pay for items at any store. It will take time for the major payment processing companies to come agree on one system, which they did with credit cards.

RFID has other consumer applications, besides being a convenient payment system. One is the recovery of lost or stolen items. A company called Snagg in Palo Alto, Calif., has created an electronic registry for musical instruments. It provides an RFID tag that can be affixed to a classic guitar or priceless violin and keeps a record of the serial number in the tag. If the instrument is recovered by the police after being lost or stolen, they can call Snagg, which can look up the rightful owner.

Toy companies are embedding RFID tags in toys to make them interactive. When Star Wars: Episode I - The Phantom Menace was released in 1999, Hasbro created action figures with embedded RFID tags. When children brought the figures close to a base station, a reader recognized the figure and addressed it by name.

RFID could be used to create smart products that interact with smart appliances. Unilever, the Anglo-Dutch consumer products goods company, has created a prototype kitchen of the future in which RFID readers in the pantry read all the tags on products on the shelves. A computer program determines what items can be cooked with what's in the kitchen.


Merloni Elettrodomestici, an Italian appliance maker, has created a smart washing machine. When you drop your clothes in the machine, an RFID reader in the appliance can read the tags in the clothes (if your clothes have tags) and wash the clothes based on instructions written to the tag (see Merloni Unveils RFID Appliances).

Whether smart appliances with RFID readers catch on depends on how long it takes for RFID tags to become cheap enough to be put into packaging for items. It also depends on whether consumers find RFID-enabled products convenient enough to accept the potential invasion of privacy that comes with having RFID tags in products. But RFID will certainly have a positive impact on people's lives in less direct ways.

One area of importance is product recalls. Today, companies need often need to recall all tires, meat or drugs if there is a problem to ensure people's safety. But they can never be sure they recovered all the bad goods that were released into the supply chain. With RFID, companies will be able to know exactly which items are bad and trace those through to stores. Customers that register their products could be contacted individually to ensure they know something they bought has been recalled.

Medical errors kill 45,000 to 90,000 people in the United States each year (more than car accidents or breast cancer). Companies are developing RFID tags and readers that can be combined with software systems to alert doctors and nurses of potential problems. Innovision Research and Technology, a U.K.-based company, is working on tiny RFID tags that could be put on medical equipment and even on catheters and luer connectors (devices that connect medical tubes). If a nurse accidentally tries to stick the wrong tube in the catheter, an alert would sound because the software would know the ID of the right catheter. RFID systems could warn doctors if they try to use unsterilized surgical instruments or nurses if they try to give drugs to patients who are allergic to the medications.

Another potential public health benefit is the use of RFID to reduce counterfeiting of products, particularly prescription drugs. It's estimated that about 8 percent to 10 percent of all drugs in the global supply chain are counterfeit. People purchasing expensive medicines might get pills that have little or no medical value, or worse, are dangerous. The U.S. Food and Drug administration is encouraging the pharmaceutical industry to use RFID to create an electronic pedigree to ensure that only authentic drugs are sold through legitimate pharmacies (see FDA Endorses RFID Technology).

Albertson's, Best Buy, Metro, Target, Tesco, Wal-Mart and other retailers want to use RFID to make sure product is always on the shelf when customers want to buy it. When RFID is used widely in the supply chain, consumers should be able to find what they want, when they want it. And if RFID delivers the efficiencies the retailers expect, prices will likely be lower too.

NCR, a technology company that makes point of sale systems, has already developed a hybrid RFID-bar code scanner that could be used at checkout counters in supermarkets (see New Hybrid Bar Code-RFID Reader). When RFID becomes common on all consumer products—which won't happen for a decade or more—quick scanning of goods in a shopping cart could increase convenience for consumers and reduce long lines.

And RFID should enable consumers to get more information about the products they want to purchase, such as when the items were made, where, whether they are under warrantee and so on. When RFID tags are eventually put on the packaging of individual products, consumers will be able to read the tag with a reader embedded in a cell phone or connected to a computer and download data from a Web site. They’ll be able to learn, for example, whether the steak they are about to buy is from an animal that was raised organically in the United States. Some companies will be reluctant to share this information, but smart companies will provide it to their customers to build trust and loyalty.

RFID could also have an positive impact on our environment by greatly reducing waste. The main reason many companies want to use RFID is to better match supply and demand and to make sure that products are where they are supposed to be. If successful, there should be fewer products that are thrown away because no one wants to buy them or they pass their sell-by date (it's estimated that 50 percent of all food harvested in the United States is never eaten).

RFID tags could also help improve our environment by identifying hazardous materials that should not be dumped in landfills. One day, robots at landfills might be equipped with RFID tags, and they might be able to quickly sort through garbage to locate batteries and other items that contain toxic materials.

Many of the consumer applications and benefits of RFID are still several years away. But the editors at RFID Journal believe that RFID technology will be used in new and innovative ways. Many of the best uses of RFID haven't even been dreamed up yet.