Startup Proximity Care is marketing a system that sounds an alert on a caregiver's phone if a dementia patient or child is wandering off.

Sep 09, 2016U.K. startup Proximity Care is offering a low-cost solution for tracking the movements of individuals and issuing an alert if they wander away from caregivers. The system—consisting of a smartphone, an app and a wearable Bluetooth Low Energy (BLE) beacon—was developed by London industrial design consultancy Mettle Studio Ltd., and will be sold in the United Kingdom and Europe in November 2016, and in the United States next April.

Proximity Care was founded in 2014 by Natalie Price, who also serves as the creative producer of London-based advertising agency TMW Unlimited. Price says she was inspired to develop the solution by her mother, who works as a caregiver for Alzheimer's patients. Her mom must keep an eye on several patients whom she may take on walks or other excursions in small groups. It is imperative that no one wanders away, Price explains, but it is impossible for a caregiver to be looking in two directions at once. 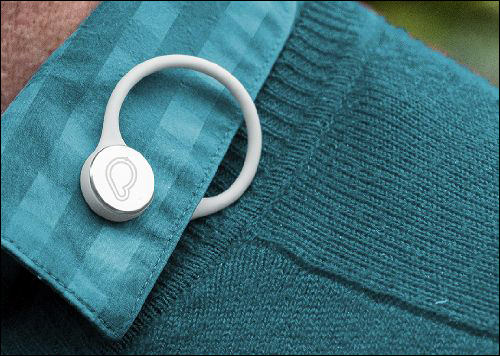 The Proximity Button is designed to be clipped onto a user's clothing via a magnet.

"I knew about beacon technology and wondered if it could provide a solution," Price says. She took the idea to Mettle Studio, which helped to create the app and wearable device that would enable anyone with the phone and app to know if a person who wore the device had wandered beyond its transmission range.

Mettle specializes in the crossover between hardware and software, and also manufactures products and develops apps, according to Sam Parkinson, the firm's technical director. The company makes solutions that include sensors, electronics housings, signal-processing systems and data-management apps. "This is the first time we've worked on beacons for a commercial product," he states.

The system is designed to be simple to use. A user downloads the free app onto his or her iOS or Android phone. The wearable beacon device, known as the Proximity Button, can be powered on or off by squeezing it. When activated, the Bluetooth device transmits its unique ID number at regular intervals, and the phone, when within range, receives that transmission. The app has an algorithm to monitor and analyze signal strengths, and is designed to disregard normal signal changes as a person wearing the Proximity Button moves around the phone (carried by the caregiver). If the transmission drops off entirely for a predetermined span of time, however, the app-management software detects the problem, prompting the app to sound an audible alert on the caregiver's phone and notify him or her that the patient has stepped out of range.

Price says the technology was tested on her mother's clients. Based on the results of that testing, she reports, Price and Mettle found that it was too easy for a dementia patient to remove a wristband or pendant. Consequently, the group designed the Proximity Button so that it could be clipped unobtrusively onto a user's clothing via a magnet.

The device costs £49.95 ($65) and is designed to have an outdoor read range of about 20 meters (66 feet)—a distance, Price says, that was found to be the point at which a caregiver would typically need to redirect an individual. 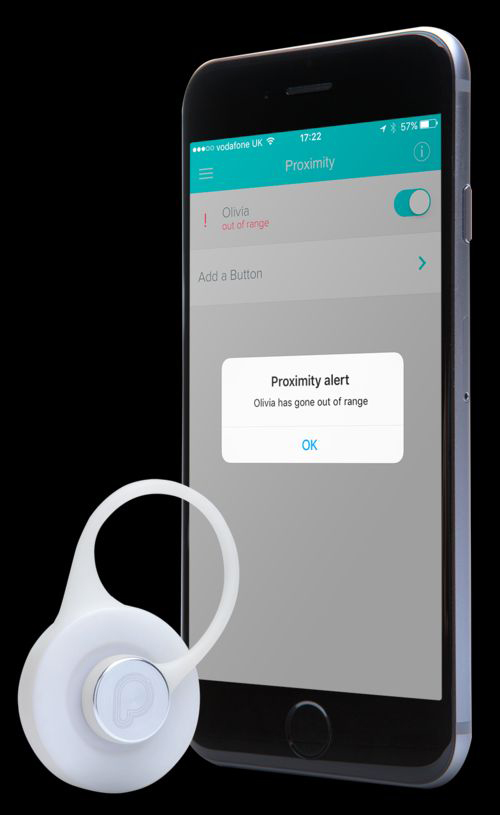 When the phone no longer receives the Proximity Button's signal for a predetermined amount of time, the Proximity app issues an alert to notify the caregiver that the patient has stepped out of range.

Future versions of the technology could be used within an individual's home, Price says, with a stationary receiver that could send an alert in the event that a dementia patient leaves the premises. Such a solution would then issue an alert to the phones of family members or caregivers, even if they are at another location. Proximity Buttons could also be utilized to monitor autistic children who might be at risk for wandering, she adds.

The development of the Proximity Button proved challenging, Parkinson recalls, due to the environment in which the device must operate. Since the unit is worn close to a person's body, its signals can be disrupted by the body itself, depending on the position and orientation of the individual wearing the device, and of the phone receiving the beacon transmissions. Mettle overcame this issue by programming the software to better identify whether a lost transmission is simply a temporary event, or a person has actually moved out of the phone's range.

The beacon is powered via a coin cell battery that can last for months, or considerably longer if it is turned off when not in use.