The Florida agency is eliminating its station storage for medicines with an RFID system that tracks its inventory of narcotic and non-narcotic drugs on each rescue vehicle in real time.

Mar 03, 2020Florida's Polk County Fire Rescue expects to save taxpayers approximately $40,000 per month, thanks to an RFID solution that will enable the district to eliminate medication storage at stations, as well as provide a real-time view into drugs being transported and delivered to patients from its ambulances. The solution, supplied by Silent Partner Technologies (SPT), has been launched at the agency's central logistics storage area in Bartow, Fla., and in one of the county's rescue vehicles, with another vehicle currently being retrofitted.

By the end of this year, the county expects to have half of its 48 rescue vehicles providing real-time data regarding what is onboard each vehicle. The system is slated to be taken live for the rest of the fleet in 2021. The solution is intended to offer better accountability for assets, narcotics and other medications, says Tera Knickerbocker, Polk County Fire Rescue's logistics manager, "so we can fluidly know where the medications are and when they are going to expire." Ultimately, she predicts, that will reduce the amount of waste being generated. She predicts that the system will increase visibility for better decision making, cut medication-carrying costs by 30 to 50 percent and improve overall productivity. 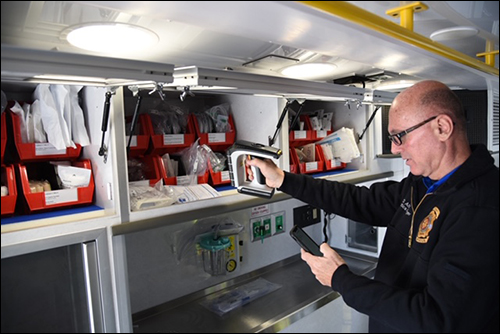 The district maintains 46 fire and rescue stations at which medications are currently stored, and there are 48 ambulances that carry about four days' worth of drugs, as well as several dozen advanced life support (ALS) fire engines. That means 60 to 70 vehicles could have medicines aboard them at any given time. The district tracks the assets and the drugs used on each vehicle by conducting biweekly inventory counts manually, then restocking supplies based on those counts from each station's storage.

The district's central logistics storage receives products from suppliers and replenishes items for each station as goods are ordered. The process is expensive and labor-intensive, however. Although high-value and sensitive products like medications are closely monitored, they can, in some cases, expire before being used, leading to waste. In other cases, a product may be needed in greater volume at one station than at another, but the district has little visibility into how fast products are being used at each site or aboard each vehicle.

By deploying RFID, the district intends to put all of the stations' inventory directly onto the trucks, and to track what comes and goes from each vehicle for the purpose of real-time replenishment. That will reduce the amount of time paramedics would otherwise spend counting inventory, Knickerbocker says, and thus increase productivity. By eliminating station medication storage, she adds, the district can reduce the cost of inventory.

Silent Partner Technologies worked on the solution with Polk County for several years as the deployment was being planned, according to Ted Kostis, SPT's president. Traditionally, he explains, fire and rescue districts throughout the United States have used paper and pen to manually track inventory and assets, which not only costs money in labor time but also leads to products being wasted. When drugs are approaching their expiration dates, those administering the medicines may not be aware of which products they should use first, which can lead to expired items being discarded. Staff members at the district are trained to save lives rather than count inventory, Kostis says.

To launch the automated RFID system, SPT and the fire district applied adhesive passive UHF RFID tags to the goods going into the ambulance, and also linked the stock-keeping unit (SKU) and related data about each item in SPT's cloud-based IntelliView software. Expiration dates and other descriptive data are then stored along with the ID number on the UHF RFID tag attached to that item. Assets such as stretchers and defibrillators are also tagged. 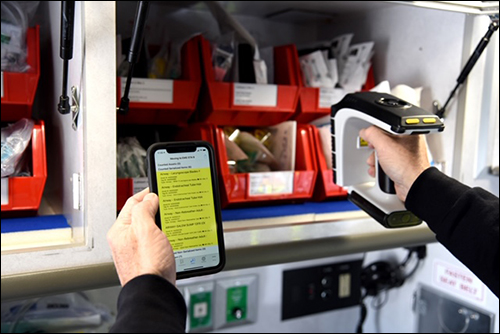 Real-time inventory stock counts can be taken on a smartphone.

The company installed one RFID reader and several antennas in a single ambulance. SPT's AP1000 reader contains a JADAK M6E Nano UHF reader, which is connected to several strategically placed antennas in order to cover the entire vehicle, including the Knox Medvault that stores narcotics. The reader includes a modem to capture the collected read data and forward it to a server via a cellular network. The device can also transmit information via Wi-Fi within the vehicle for constant reading of tags during transit.

"What we're doing is creating as much visibility as possible," Kostis states. With the reader capturing all tags loaded onto a vehicle, it can send an inventory update at preset intervals, as well as indicate if something has been removed. That enables what Kostis calls a living, breathing PAR list that can feed a replenishment order and pick ticket at the logistics center.

When supplies, including new drugs, arrive at the logistics site from a supplier, an authorized employee tags each product and enters it into the database. There are several safes at the logistics site, and an SPT AP1000 reader is deployed at one such safe for the purpose of providing real-time visibility. More readers will be employed to cover all safes as funds allow, Knickerbocker explains. As goods leave or enter the safe, the software is automatically updated with a new inventory count. The items can then be loaded directly onto an ambulance, where each tag is again read by the vehicle's fixed reader.

Phase two of the deployment will include additional ambulances, and RFID tags will be applied to more assets. For instance, high-value equipment, such as defibrillators, stretchers, and other tools, will be tagged. SPT trained district personnel to deploy the technology in the vehicles themselves.

This year or next, the district plans to employ handheld readers to track inventory levels aboard firetrucks. TSL 1166 readers capture RFID read data when an employee conducts a periodic inventory count by walking around a truck. The reader captures tag IDs, then forwards that information to a user's Apple iPad via a Bluetooth connection. 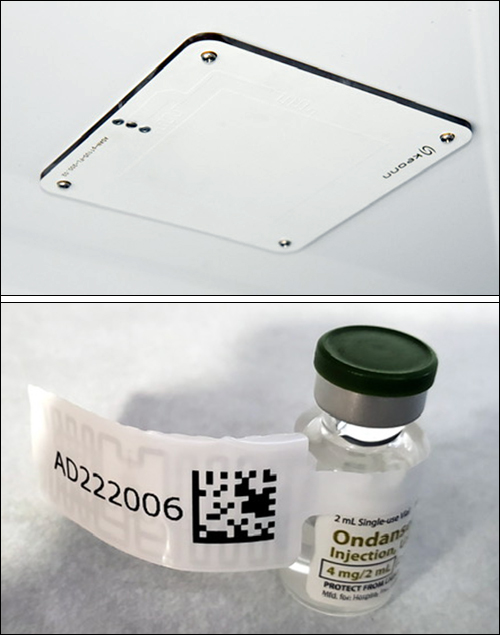 With station storage eliminated and the amount of waste reduced, Knickerbocker estimates that the district will save tens of thousands of dollars monthly. So far, the first vehicle has proven to only require restocking once a week, thanks to more accurate and real-time inventory counts. The software can also provide alerts, such as warning personnel if a product is set to expire.

"It's definitely going to be a huge cost savings," Knickerbocker says, adding that the fire and rescue staff have found the technology to be a time-saver. "They're ecstatic about it. We got a quick buy-in from field members and did training with all three shifts to explain how the system works. They've been providing suggestions about tweaking the system," such as color-coding RFID labels.

"The fire service, in general, is a very old-school, traditional sort of service, so making a change like this is huge," Knickerbocker states. "It's a huge change to the mindset. But now, instead of overstocking, we have accountability and can stay to a fixed number of goods." Although the district has been applying UHF RFID tags to its products as they are received at the logistics center, it hopes that suppliers will assume that role in the future. "We're looking at partnering with EMS suppliers to provide our product pre-bagged and tagged."