The agency's suppliers and inspectors are using UHF RFID tags, as well as handheld readers and a cloud-based server, to identify when construction materials are made and then inspected.

Oct 24, 2014The North Carolina Department of Transportation (NCDOT) is driving a deployment of radio frequency identification technology that is enabling its own laboratory testing of samples from job sites, as well as inspections of precast concrete materials at the sites of suppliers, to be captured and then managed electronically. That solution, provided by International Coding Technologies (ICT), enables the agency to better manage where materials used in an infrastructure construction project originated, which inspections were administered and the results of the inspections. To date, two suppliers have signed up to use the technology and share data related to RFID reads of their tagged precast concrete materials: Cherry Precast and Concrete Pipe & Precast. They stand to gain visibility into their own inventory-management and inspection processes as well.

Typically, precast concrete objects (a manhole or a noise-reduction panel, for example) are produced by suppliers and inspected by NCDOT inspectors before being sold and transported to the North Carolina Department of Transportation for use on roadways and other projects. To help the state agency keep track of the items, a supplier stenciled its own unique identifier on each asset, in order to indicate the manufacturing date, and an inspector stenciled an additional unique number to indicate that item's place in the production sequence of all objects produced in that batch. Stenciled IDs then also had to be input into an electronic system residing on NCDOT's database. 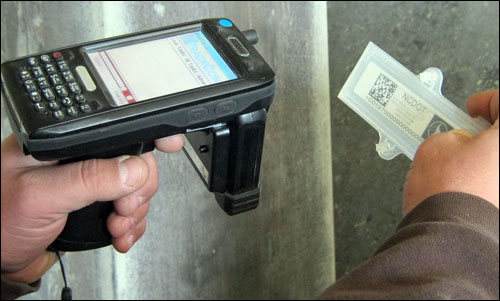 Before attaching an Idencia RFID label to a mold used to make a precast concrete item, the manufacturer uses a bar-code scanner or RFID reader to capture the label's ID number.

There are numerous shortcomings with this manual tracking method, according to Randy Pace, a materials operations engineer at NCDOT. Stenciling was time-consuming and error-prone, he explains, and could not be accomplished at all if weather didn't permit. Since the system data was manually input after the inspection process was completed, inspectors had no advance knowledge of when specific products would be ready for inspection and delivery, which led to excessive driving to and from sites seeking products to inspect. The state had been downsizing the department as well, and currently has 17 fewer inspectors than it employed in 2008. As such, the agency required a more efficient process.

Around 1998, NCDOT had launched the Highway Construction and Management System (HiCAMS), an online system for monitoring materials manufactured and sold to the agency, along with the inspections related to them. The HiCAMS website managed by the state agency could be accessed by suppliers via a password, enabling them to view data about projects, orders and products delivered. However, all data had to be manually input into the system.

NCDOT began seeking an automated way to feed data to the HiCAMS system, and considered using bar-coded labels on some materials to track the testing of each individual item provided to the agency. At the time, however, bar-coding was not considered feasible due to the cost of such a system, as well as the need for personnel to carry bar-code scanners. What's more, bar-coded labels could not withstand the conditions of precasting, which meant they could be affixed only after the concrete was formed—and, making matters worse, the labels could then be knocked or peeled off after that time.

In 2011, Pace says, the agency began looking into RFID solutions. It found IDT and its Idencia label, which comes with a passive EPC Gen 2 ultrahigh-frequency (UHF) RFID inlay from Shanghai Boing Information Technology Co. encased in a rugged protective plastic. The label, which measures 1.5 inches by 4.5 inches and has a human-readable and bar-coded ID number printed on the front, is designed to be embedded in the precast concrete during the casting process, explains Tom Tilson, ICT's president and founder.

The solution, consisting of Idencia RFID labels and cloud-hosted software, was piloted during the past two years at five companies that manufactured precast concrete materials. In the course of that pilot, NCDOT and ICT embedded tags during the casting of 13,000 products, and then read those tags using handheld readers. Now that the pilot is completed, Pace reports, two precast suppliers are using the Idencia solution, while he expects the agency's other suppliers to join in by paying a service fee and acquiring tags from ICT.

In May of this year, NCDOT began using the RFID technology internally to track samples of the concrete that the agency was utilizing to construct roads and bridges. The samples—such as concrete test cylinders, soil samples, aggregate from quarries or roadway, reinforcing steel, asphalt and other materials—related to ongoing construction sites are tagged at those sites and are then tracked while being shipped to one of five regional laboratories, as well as to a central laboratory and through the testing process. At the work site, an Idencia label can either be placed in a bag along with the sample, or be zip-tied to it. For instance, a concrete test cylinder may be sent to a lab for testing; in the past, a printed card traveled with each sample in order to ensure that its identity was tracked.

"Now, there is no more card to fill out," Pace states. Instead, all data is automatically received and input into the HiCAMS system. Staff members at the lab use an RFID reader coupled with an Android smartphone or tablet to read the RFID label, and the tablet or phone then displays the sample's origin, details about the materials used to make that sample and other information, and can input their own data related to any testing performed.

Before making a precast object, a participating precast supplier uses a bar-code scanner or an RFID reader to capture an Idencia label's ID, and then enters such data as the type of product, the date and the location, along with answers to a series of questions taken from the National Precast Concrete Association (NPCA) and the American Concrete Pipe Association (ACPA) quality-control production checklists. Other information is entered during production as well, such as the spacing and size of reinforcing steel or fresh concrete properties. Idencia's patented label comes with plastic legs (tabs) that are attached to the form into which concrete is going to be poured. When the casted concrete is removed from the mold, the legs tear off the label and stay with that mold, while the label itself remains embedded in the hardened concrete.

Once casting is complete, that tagged item's status is updated in the cloud-based system. Inspectors and other NCDOT management can access the Idencia system at any time and view which items are being manufactured, as well as what is ready for inspection. In that way, inspectors can arrive onsite in a timely manner and know that the products are ready for them. This saves both time and fuel costs, since an inspector who is at a location near a supplier with finished products can stop there before returning to his or her office—which, in the latter case, would require another trip to that site at a later time.

When the inspector arrives onsite, he carries an Android phone or tablet and a battery-powered ATID AT288 Bluetooth handheld UHF reader. (The agency is also considering using handheld readers from other RFID companies, Pace says.) The inspector brings the interrogator within range of each precast concrete item's RFID tag to capture its ID number, which it transmits to the tablet or smartphone via a Bluetooth connection. The phone or tablet forwards the ID to the cloud-based Idencia server in order to access a series of instructions, consisting of questions and prompts that lead the inspector through the inspection process, instructing him to input data as he goes along. Once he has completed the inspection, the data is updated in the server, and if the inspection has passed, NCDOT can then use that item. In the meantime, the Idencia data is available on the cloud-based server, as well as in the HiCAMS software. Precast suppliers using the solution can track their own product output with the technology as well, signing into the Idencia system to learn which products have been manufactured, the inspection results and the shipping date. 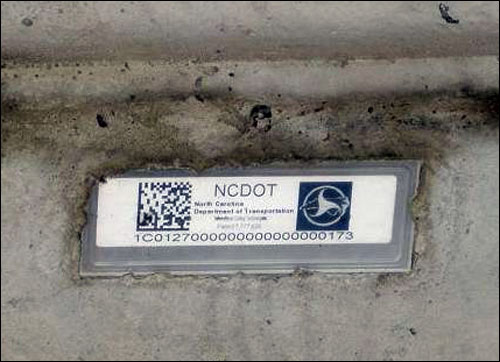 A precast concrete object with an embedded Idencia RFID label

Although Pace has not yet had time to measure the system's benefits since it is just being taken live now, he says the agency expects to achieve $1.2 million in savings within the first year, based on a reduction in labor, vehicle and fuel costs (resulting from the reduced time that inspectors spend onsite, and the fewer visits made), as well as stenciling-related costs (paint and labor). Savings based on the sample program, Pace adds, would be in addition to that amount. Meanwhile, he says, NCDOT paid approximately $19,000 for the software, $2,400 for six handhelds and 85 cents per tag.

About six inspectors are using the AT288 readers at present, Pace reports, but the plan is to supply the technology to all of the agency's approximately 70 inspectors in the future. Following implementation with precast concrete suppliers, the agency eventually expects all products, including metal and plastic pipes and steel girders, will be tagged. Those tags could then not only be used prior to the product's installation during construction, but also onsite in the future, as inspections of bridges and other infrastructure are required.

The North Carolina Department of Transportation's suppliers can subscribe to a standard package for an annual fee of $3,564, enabling three users to access basic NCDOT-required information, including quality-control tracking and reporting, pictures and job tracking (to track per job, as well as per product), and the transfer of that data to NCDOT. A premium package, with an annual $5,940 fee for five users, provides not only access to basic DOT information, but also a number of other features, including geo-location, inventory counting, shipping validation and delivery verification. Tags cost users 85 cents apiece.