The vendor's RFID-enabled system uses acoustic and height sensors to improve a forklift's accuracy and throughput.

"The business problem is that it is very expensive to operate forklifts in high-volume warehouses or distribution centers," says Bill Petry, strategic marketing manager for M/A-COM, which unveiled its RFID Forklift System at last week's ProMat 2009, a Chicago-based conference focused on supply chain solutions. A typical warehouse, he explains, may operate 10 to 20 forklifts simultaneously, each moving pallets to and from numerous dock doors to rows of stacked shelves. "Each forklift probably moves about 20 pallets an hour, and the real challenge is to increase the throughput of the pallets processed, and to process those pallets accurately." 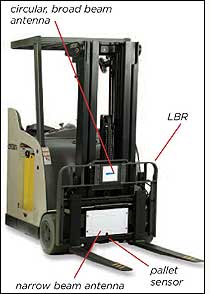 Initial estimates by M/A-COM indicate that a company utilizing the RFID Forklift System would likely increase the throughput of moving pallets in and out by 10 to 20 percent, Petry says, with the added benefit of increased accuracy. He adds that a 10 percent increase in throughput is a very large cost savings. "Operator labor is the dominant cost element in these warehouse operations, dwarfing the forklift acquisition cost."

Many warehouses employ bar-coding solutions to help ensure the correct pallets are moved. In a number of situations, forklift operators must then halt the truck, hop off and manually scan the bar codes located on pallets and shelves before loading or unloading them. This can be a time-consuming process that slows operators down, thereby decreasing the number of pallets that can be moved and increasing the amount of labor required—both of which add costs to warehouse operations. Several companies have wanted to leverage RFID instead, especially since so many suppliers are adding RFID tags to pallets. But simply affixing RFID interrogators to forklifts so they can read RFID tags affixed to shelves and pallets may not work.

"Warehouses are complex, and they are tough environments for RFID," Petry states. "There is a lot of interference from the metal, and when there are racks and racks of pallets with RFID tags on them, when you drive a forklift around with an RFID reader, it will get lots and lots of reads. So how do you know if you have the right pallet being loaded onto the forklift?"


M/A-COM's RFID Forklift System leverages sensors that, in effect, help filter out all of the other tag reads. The system can be added to new forklifts or retrofitted to existing ones. An Impinj Speedway EPC Gen 2 reader, acoustic and laser sensors, and two reader antennas (broad-beam and narrow-beam) are built onto the forklift's load backrest (LBR). The broad-beam antenna reads all tags within a wide field of view, while the narrow-beam antenna is more directional and is used to interrogate the shelf tags. The acoustic sensor and broad-beam antenna help identify an RFID pallet tag after it has been loaded onto the forklift.

"The reader is constantly interrogating tags, but the system is designed to ignore those reads until there is something on the forklift," Petry explains. "When the acoustic sensor detects a pallet on the forks, the system knows to capture the read." The acoustic sensor sends out sound waves beyond human hearing; it listens for the reflected sound energy, then measures the round-trip time. When it hears a reflection that is only 2 feet away, it triggers the "pallet-on" event, which instructs the broad-beam antenna to recognize the most recent or strongest pallet tag as the actual tag for the pallet now on the forklift.

A second sensor employs a laser to determine the height of the shelf from which the pallet is being removed or on which it is being placed. The system's narrow-beam antenna then reads the RFID tag attached to that shelving unit. Once more, as the sensor determines the height, it triggers the "pallet-on" event, thereby directing the narrow-beam antenna to recognize that the most recent and/or strongest tag is the correct tag to associate with that particular pallet. By capturing the shelf tag and shelf height, the system has more-refined pallet storage location information.

All of the data collected can then be transmitted to a back-end warehouse-management or other system via the RFID Forklift System's built-in Wi-Fi connection.

"The forklift operator never has to take his hands off the steering wheel, never has to leave the cab, or touch a wearable computer, or push any button," Petry says. "All he has to do is drive the forklift. That eliminates errors and improves throughput."

M/A-COM initially designed the system for a customer that wanted to leverage RFID on its fleet of forklifts. The vendor is now offering the system to both end-user companies and forklift manufacturers that want to build the RFID Forklift System into their forklift trucks. For instance, M/A-COM is working with Crown Equipment Corp., which is expected to offer the company's RFID Forklift System as an option on its vehicles later this year. In addition, The Raymond Corp., a provider of forklifts and other materials-handling solutions, is engaged in business discussions with M/A-COM, and the two firms intend to cooperate in technology development.