The retailer is testing a passive UHF solution from QuikQ enabling truck drivers to fuel up more efficiently, while also ensuring against fuel fraud.

Sep 09, 2011Trucking companies purchasing fuel at Love's Travel Stops and Country Stores will soon be able to equip their trucks with radio frequency identification tags, so that drivers will be able to fuel up without scanning ID cards or entering data into a keypad. The advantage, for both drivers and their companies, is that this will not only speed up the fuelling process (by eliminating the need for ID cards), but also ensure against fuel fraud—a practice by which fuel is sold by a company's driver to another driver at the fueling station, at that firm's expense.

The system, known as Fuel Island Manager, is provided by QuikQ, based in Franklin, Tenn. Love's Travel Stops is currently testing the technology at one of its locations in Oklahoma City. If all goes well with the testing, the company hopes to equip each of its 215 fuel stations with RFID readers by the end of 2011; the firm also has another 60 locations that do not provide fuel. 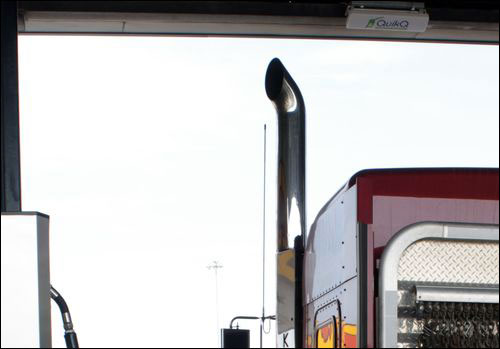 At each fuel pump, an overhead RFID reader antenna automatically identifies the truck being fueled.

Love's Travel Stops and Country Stores is a family-run retailer that operates truck stops that sell fuel, food and supplies across 39 U.S. states. Many of these facilities—known as travel centers—are frequented by drivers working for trucking companies, according to Jenny Love Meyer, the retailer's director of communications. Truck drivers typically use Comdata or some other fuel-payment service that allows them to swipe a card at a fuel pump, and to input information, such as his or her ID number and the vehicle's odometer reading, in order to obtain authorization to purchase fuel, which is then billed directly to the driver's employer.

With Fuel Island Manager, Love's hopes to add a layer of efficiency and security to the solution. An EPC Gen 2 passive ultrahigh-frequency (UHF) RFID tag on a truck or a refrigerated trailer enables a vehicle to be recognized as it pulls into the fuel lane. Authorization to begin fueling is automatically initiated, sparing that individual the process of swiping a card or entering data on the keypad.

When installed at a fueling station, the Fuel Island Manager consists of one or more Impinj readers and up to four antennas per interrogator, with each antenna mounted above a lane at which one fuel pump is located. Impinj Monza 4 RFID chips are embedded in tags attached to vehicles, says Vince Peschio, QuikQ's CTO and VP, each encoded with a unique ID number linked to the specific truck to which it is affixed. QuikQ has partnered with Comdata so that its fuel-payment solution can be used in tandem with Fuel Island Manager to pay for fuel purchases.

QuikQ also provides its own payment-based software, known as DFConnect, which is linked to the Love's point-of-sale (POS) system, allowing users to be billed by Love's. The tag, Peschio explains, is encoded with a list of credentials indicating the billing system used. Thus, if a user were to pay via a Comdata account, that information, along with the tag's ID number, would be routed to the software. Although Comdata is the first business to partner with QuikQ, Peschio says his company is currently in discussions with other billing firms as well.


When a truck pulls into an RFID-enabled Love's fuel station, its tag is interrogated by an antenna mounted overhead at the fuel lane in which the vehicle is parked. After the reader captures the tag's unique ID (as well as billing information), it transmits that data via a cabled connection, which then connects to the Love's POS system. From there, the information is routed to either the user's DFConnect or fuel-card billing system (such as Comdata, or some other future partnering company) for authorization. Once the customer is authorized, QuikQ's software then issues instructions to activate the fuel pump. Once the driver has completed fueling a vehicle, he or she can put the pump nozzle back in its cradle and drive out of the bay, at which time the vehicle's ID number will no longer be read. The QuikQ software then determines that the transaction is complete, and the customer is billed accordingly. In the event that a truck leaves the fuel lane with the nozzle not having been hung up to complete the purchase, the Fuel Island Manager software will automatically complete the purchase and deactivate the pump.

The Fuel Island Manager solution can also be installed at unattended facilities, such as at a truck fleet's "terminal fuel" location, where Fuel Island Manager would welcome the driver by name via a display screen. The version employed by Love's, however, will not utilize that welcome-screen function.

The RFID technology provides some security to a system that, in the past, has been vulnerable to fraud. In some cases, for example, a driver might use a fueling card to authorize payment for fuel supplied to any vehicle that he or she drives, and then allow a different driver to fuel up his or her own vehicle, and to charge the authorized driver for that fuel. With RFID, this transaction would not be possible, since the vehicle must be recognized before the pump will operate. The read range is "zoned," Peschio says, so that a tag will be read only when a truck is parked in front of a nozzle, and to ensure that there are no stray reads from other truck tags in the vicinity. "Our antennas are positioned to keep reading within a specific area," he states.

The solution is initially being tested at the Oklahoma City site, while a second installation is presently underway at a Love's fueling station in Amarillo, Texas. In addition, Peschio says, QuikQ has another customer that is installing the system at an unattended station in Alabama.

At Love's Travel Stops and Country Stores, the solution will enable trucking-company fuel managers to maintain an automated record of which vehicles have been fueled, the location and time of each fueling and the quantity purchased. "We're focusing on improving customer convenience," Meyer says. By the end of this year, she adds, Love's hopes to have all 215 of its fuel stations equipped with the RFID technology.