Keeping Guns Out of the Wrong Hands

TriggerSmart has developed an RFID system that ensures only a firearm's owner can pull the trigger.

Feb 01, 2012Gun safety has long been an issue in the United States. Each year, almost 100,000 people in America are shot or killed with guns, according to the Brady Campaign to Prevent Violence. That includes victims of violent attacks, unintentional shootings, including those by children, and suicides. Occasionally, guns are wrested from police officers and used against them, and many guns are stolen from homes and sold on the street.

Smart-gun technologies aim to reduce gun violence by ensuring only an owner can fire his or her weapon, but so far they have failed to solve the problem. Biometric systems, for example, designed to recognize the fingerprint or heartbeat of the person whose finger is on the trigger, and then match it to the owner, take too long to be of use during a crisis. Now, a company called TriggerSmart, in Limerick, Ireland, may have a solution based on radio frequency identification technology. 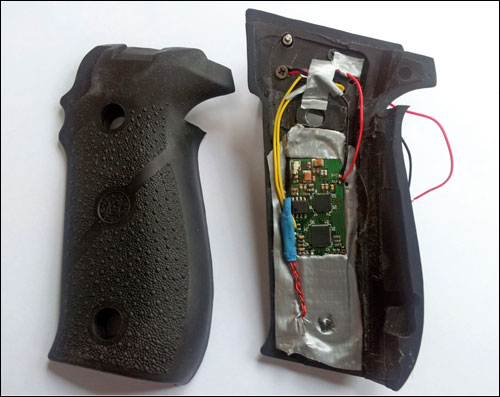 A tiny high-frequency RFID reader module is embedded in the handle of the gun.

Here's how it works: A tiny high-frequency RFID reader module is embedded in the handle of the gun. The gun owner is issued a passive HF transponder—it could be in a ring or a wristband—that communicates with the reader. The instant the reader receives the correct ID number from the HF transponder, the safety disengages and the gun can be fired.

Patrick O' Shaughnessy, a gun enthusiast, and Robert McNamara, his friend, came up with the concept after exploring a number of biometric options that didn't pan out. The two have worked with researchers from Georgia Tech Ireland, an offshoot of the Georgia Institute of Technology, in Atlanta, to develop a prototype that works well in the lab. "The safety is disengaged the moment you bring the transponder near the gun," McNamara says. "The next step is to shrink the RFID reader to the size where it can be embedded in the handle, and we can create a working prototype."

The biggest challenge the two friends have faced has been getting access to a gun. "It's very tough in Ireland to get your hands on a gun," McNamara says. "There are programs where police departments will lend out weapons for this kind of research, but they are tightly controlled."

TriggerSmart has filed a patent for the system and engaged metraTec RFID Solutions, a company that specializes in designing reader modules that can be embedded in products, to help build the prototype. McNamara envisions that one day police officers and home owners could be issued RFID wristbands or rings, so no one else would be able to fire their RFID-enabled guns. He also believes the TriggerSmart concept could prevent mass shootings, such as those that occurred at Virginia Tech in 2007 and the Utøya island youth camp in Norway in July 2011. "Imagine that the gun has a wireless device that lets you communicate with it over Wi-Fi or other longer-range communication," McNamara says. "In the event of a crisis, the police could deactivate only the shooter's gun in an airport or other public place."

Some gun owners might object to this level of government control, but clearly TriggerSmart has identified a promising solution to the potentially lethal problem of accidental weapons discharge.