Keep an Eye On Energy-Harvesting Tags

RF energy can charge or operate a wide range of low-power devices.

Jan 06, 2015Energy harvesting is a process by which energy is captured from a variety of sources in the surrounding environment—radio waves, thermal energy and ambient light, for example—and converted into electrical energy. RFID providers have developed energy-harvesting tags that can power themselves as well as small devices.

"In some instances, a battery is just not an option or can't be counted on for the long term," says Victor Vega, director of NFC/RFID solutions at NXP Semiconductors. "Imagine in California, where we have our fair share of earthquakes and structures need special earthquake cross-sectional beams for stability," he says. "After a quake, it may be necessary to check the integrity of the beams. But if they are concealed behind drywall, that's a problem. You could have a battery on a sensor and maybe a cut-out in the wall to enable an occasional battery replacement, but that's not viable."

Instead, Vega says, "you could place the sensor on the beam, connect it to a flex circuit board, and the tag antenna part is just behind the drywall. On the finished side of the wall is a 'test here' indicator. You tap and energize the sensor to read if the beam is stressed or OK. No batteries, no special cables with ever-changing connectors."

Here's how companies can use the energy-harvesting tags available today, and why the Internet of Things—with its promise of ubiquitous tagging and sensor monitoring—is driving research and development efforts.

The transponder chip also features energy-harvesting capabilities that enable it to provide energy to other low-power components. "With the NTAG I²C, we added a power-harvesting feature," Vega says. "Not only does the chip rectify power for itself, but it provides quite sufficient power for other devices as well." 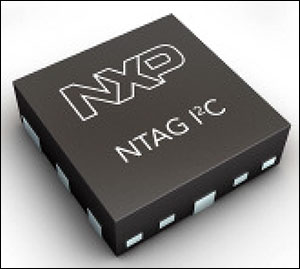 The NTAG I²C harvests energy from the RF field emitted by NFC-enabled mobile phones or other NFC reader devices, Vega says. "It captures the alternating current/RF energy, converts it to a usable direct current [DC] power and includes a vout [voltage out] power-harvesting output to drive other peripheral components [that need] DC power," he says.

The company has created a development kit that demonstrates how the NTAG I²C can use the harvested energy—typically, 3 volts—to power itself, an NXP microcontroller, an NXP temperature sensor and an LCD display. "It's quite impressive to see how much energy can be captured from the available RF energy—no batteries required," Vega says. The kit provides an embedded electronic design platform and includes hardware and software tools.

Developers can port their own code into the platform and quickly assess feasibility for their custom applications, with minimal development time and cost, he says.

The NTAG I²C is modular, so it can work with a variety of sensors, providing power to the sensors and communicating via the I²C serial interface. The data from an external sensor, such as a temperature monitor, can be fed to the NTAG I²C and redirected, for example, to an RF reader device.

Most interest in NXP's energy-harvesting chip seems to be in wireless configuration and diagnostics/reverse logistics, Vega says. To illustrate the first case, he cites the example of pulling parts off an assembly line, waiting to connect them to a power source, waiting for them to boot up, and then downloading configurations or updating firmware. This takes time and contributes to higher costs. "Being able to wirelessly configure electronics without powering up the main board and eliminating a configuration connector makes this an attractive solution," Vega says. 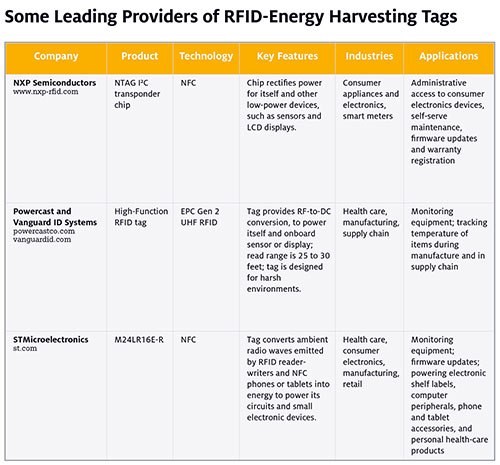 Click here to view a larger version of this chart.

"On the reverse logistics side," Vega says, "let's say an electronic device or appliance fails. It doesn't turn on, so no information can be gathered. With the ability to communicate with the passive NTAG I²C, you could use a low-power diagnostics module, tap on the tag and extract the last recorded diagnostic codes to get the electronic serialization, model, warranty history and other information—all from harvested power." It's also possible to use the pass-through mode, like a modem, to download firmware patches, he says.

STMicroelectronics
STMicroelectronics (ST) offers a 16 kilobit dynamic RFID NFC tag that includes energy-harvesting capabilities, as well as password protection and electrically erasable programmable memory. The M24LR16E-R also features an I²C interface that can be used for in-field product upgrades and software enhancements, according to an ST spokesman.

The M24LR16E-R's RF interface can convert ambient radio waves emitted by RFID reader-writers and NFC phones or tablets into energy to power its circuits and enable complete battery-free operation. The company says the M24LR16E-R can also harvest enough energy to power small electronics, including shelf labels, personal health-care products, computer peripherals, and phone and tablet accessories. The tag does not include sensors but can be used in environmental monitoring systems.

Powercast and Vanguard ID Systems
Powercast and Vanguard ID Systems have partnered to develop an EPC Gen 2 ultrahigh-frequency RFID tag that harvests energy. The High Function tag, introduced in April, is designed to fill a void, says Charles Greene, chief technical officer at Powercast. Basic passive UHF tags are becoming more pervasive and are low-cost, he says, yet their functionality is limited without a power source. Battery-powered tags tend to be too expensive for many applications, such as tracking the movements of cold-chain goods from a processing plant to a store. What's more, they may not operate well under some extreme conditions, such as packed in ice.

The High Function tag uses Powercast's RF energy-harvesting technology to provide RF-to-DC conversion. The tag, which includes an RFID chip and Powercast's integrated circuit, receives energy from an RFID reader. Because the tag has extremely high RF-to-DC conversion efficiency and sensitivity, Greene says, "we can provide more power and a longer read range." It can deliver 10 times the power of a standard passive RFID tag, he says, and has a read range of 25 to 30 feet.

The High Function tag is protected by Teslin, a waterproof synthetic printing sheet provided by Vanguard. "Teslin acts like Bubble Wrap to protect the RFID inlay from the elements and any other harsh environments," Greene says. Vanguard's manufacturing process makes the tag waterproof, weather-resistant, flexible and reusable, he says.

The tag can also power onboard sensors and displays, Greene says. Tags available or in development now include temperature, vibration, humidity, tilt or moisture-content sensors and visual indication displays. "The tags are typically battery-free but some contain a rechargeable battery," he says.

"Most of our applications are in supply chain, industrial monitoring and manufacturing processes," Greene says. The High-Function tag, for example, can measure vibrations on machinery at a manufacturing facility. The collected data could indicate a potential problem with a piece of equipment before it fails, saving the company the cost of having to shut down a manufacturing process.

The health-care industry is another good fit for the High-Function tag, Greene says. "Our tags allow for real-time monitoring of blood, vaccines and other medical supplies' temperature throughout their journey from manufacturer to facility," he says.

Powering the Internet of Things
While few companies offer RFID energy-harvesting tags today, that's likely to change given the ongoing research and development in the field. Polish Bluetooth beacon technology startup Ifinity, for example, is preparing to pilot its energy-harvesting AirBeacon. The battery-free button-size device, which doesn't have to be plugged into an outlet, draws power from ambient RF signals. And a group of researchers from Intel Labs has partnered with several university researchers to develop a power-harvesting NFC tag that can store sensor data and display it on an electronic paper screen, by using power harvested from a user's NFC mobile phone during tag reads.

"A number of companies, labs and startups are developing energy-harvesting RFID tags, but many companies are not fully prepared to unveil their offerings publicly," says Michael Liard, an independent analyst focused on RFID technology. "Energy-harvesting solutions are still in a nascent stage, with value propositions and business cases under evaluation or being determined through proof-of-concept deployments [and] implementations."

Most development efforts are concentrated in the arena of sensing and monitoring applications and solutions, Liard says. The power being harvested by tags will be used to power sensors attached to tags, he says. "Longer-range—which requires more power to deliver—is another area of development in this corner of the RFID market," he adds. "Exact cost savings are determined by the application and the use case. Energy-harvesting tags are also being positioned as a 'green' choice alternative to battery-powered counterparts. Energy-harvesting features also better position RFID and NFC tags against low-cost, low-energy technologies such as Bluetooth." 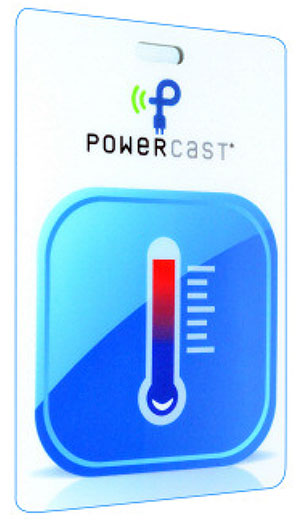 Liard foresees applications in the area of IT asset management and data centers, where environmental data can augment identification. "I also see promise in industrial markets such as oil and gas, food safety and security, and manufacturing," he says. "The potential for energy-harvesting tags is limitless, but will depend on the needs of the customer and the applications. These types of tags bring us beyond the basic visibility conversation to one centered more on enabling end users to capture multiple value propositions—for example, visibility combined with enhanced awareness and monitoring."

Growing interest in the Internet of Things, in which consumer devices and industrial items will be tagged and monitored via the Internet, will likely drive demand for energy-harvesting tags. Ubiquitous tagging could be expensive, but these tags could cut costs by pulling energy from the environment to power wireless sensors and other devices. "Energy-harvesting tags fit well within the IoT concept," Liard says, "as they represent the means to capture more information wirelessly."