The systems integrator says its new software serves as a scientific tool for tagging cases and building pallets.

Mar 23, 2005Integral RFID, a systems integrator based in Richland, Wash., is releasing software designed to help users optimize tag placement on cases and pallets in order to attain the highest possible read rates of UHF tags. Called Instant EPC Hotspot, the product works by first analyzing the tagged cases in a two-step process and then analyzing pallets of cases, providing 3D graphic representations of the cases and pallets.

Chris Parkinson, president of Integral RFID, says Integral RFID worked with the consumer product company Unilever to test an earlier version of the Hotspot software in internal Unilever RFID trials. Simon Ellis, Unilever's supply chain futurist, says that after using the Integral RFID software, his company was able to increase read rates from 35 percent of cases of a particular stock-keeping unit (SKU) on a pallet to 55 percent of cases of that same product on a pallet. Ellis says that while the concept behind the Instant EPC Hotspot software is not revolutionary, it is an easy-to-use and effective tool that helped Unilever conduct tag placement tests "much more efficiently" than previously. Unilever is one of Wal-Mart's top 10 suppliers. 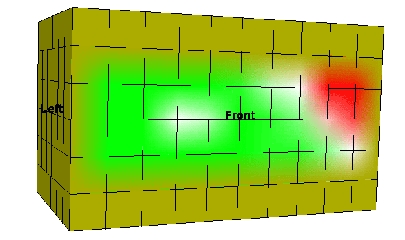 "A lot of people are casing a pallet and putting it through a portal and guessing [on tag placement]," says Chris Parkinson, president of Integral RFID. He says that by giving the user a clear vision of which cases on a pallet are being read and which are not, Instant EPC Hotspot will eliminate much of the trail and error that comes with searching for optimal tag placements and configurations of cases on pallets.

In the initial analysis of a case of any particular product to be tagged, the user begins by inputting the name of the product in the case being tested, the case dimensions and the type of tag being used so that Instant EPC Hotspot software can render a 3D image of the case and keep track of the type of tag being tested. The user then tapes a tag (the system works with any passive EPC Class 0, 0+ or 1 UHF tag and will work with Gen 2 tags as they become available) to the end of a foot-long plastic ruler and slowly moves the tag around the case, making sure that the tag is touching the case at all times. Parkinson says they chose everyday plastic rulers for the test because they are ubiquitous and because plastic poses no interference issues with respect to the RF signal, whereas a human hand would cause interference.

As user moves the tag across the case, the Instant EPC Hotspot software induces the reader to interrogate the tag multiple times to assess the readability of the tag in each position. Using a proprietary mix of algorithms, the software measures the strength of the RF signal and interrogates the tag across all of the channels in the UHF range. The software depicts the overall readability of the case through 16 different color levels on all sides of a 3D image of the case. The 16 levels range from bright green, indicating the highest level of readability, through lighter shades of green to white, representing medium readability, and then from light red to bright red, representing no readability at all. This is called a sweep test.

Parkinson says this step saves the user time by giving an overall profile of the case. If the graphic representation shows a completely green box, tag placement will not be an issue and the user can skip the next level of more granular testing. If the image is completely red, the user might want to repeat the test with a different UHF tag with more proven effectiveness on or near objects with high metallic or liquid content. During the sweep test, the software saves the 3D images with colors indicating the object's effect on tag readability so that the user can later reference them.

The second test is called the hot-spot mapping test. For this, the software produces an image of the case covered by a grid, instructs the user to place the tag in each of these grid squares and has the RFID reader interrogate the tag in each square. This process is designed to help the user find the optimal placement of the tag on the case. During this test the software also outputs a 3D graphical representation of the case that shows the grid and labels the front, back and sides of the case as well as color ratings of each area of the box indicating readability. For example, the lower right front of a case might be green (signifying a highly readable area) and the lower left front might be red (signifying low readability). The software also saves these renderings for the user's reference.

Once the hot-spot mapping test is complete and the user finds an optimal tag location for a case of a particular product, the final test, called the pallet-level test, shows how many of those tagged cases are readable as the pallet moves through a portal reader. To begin this test, the user inputs the company's standard pallet configuration for the particular SKU being tested. An example of a standard configuration of a pallet of cases could be three cases high, five deep and four wide, for a total of 60 cases. Once the software establishes the configuration of the pallet, it generates a 3D image of the pallet. As the user moves the pallet through a portal reader linked to the Hotspot software, the image changes, showing the cases with a readable tag as outlined transparent blocks and the cases with an unreadable tag as opaque colored blocks.

Parkinson explains that the purpose of the product is not to tell the user how to stack the pallet, but to help him see very plainly which cases on the pallet are not being read using the standard configuration, even though the tags are being placed in the optimal location on the cases. "This is a tool to help you experiment with stacking the cases in a new way and then test the pallet to see if you can better readability overall," he says.

Parkinson, a former engineer at Alien Technology, launched Integral RFID last year (see EPC Integration Firm Launched). He says he believes the reason there are relatively few firms offering scientific tag-placement testing products is that most of the engineers with the required knowledge are too busy installing RFID systems. One firm that does offer such a product is ODIN Technologies, which last year began offering its Trifecta product. Recently upgraded by ODIN (see ODIN Upgrades Its Tag-Testing Tool), Trifecta scientifically tests various tags on products in order to determine optimal tag and placement configurations.

A number of other systems integrator firms also offer tag-testing solutions to clients to help them optimize tag placement, but their approach differs from the one used by Integral RFID. "As far as I know," says Parkinson, "most [systems integrator] testing is done through trail and error," rather than a scientific method, or by using software produced by a tag manufacturer such as Alien.

Integral RFID's Instant EPC Hotspot product is available now. Pricing for the software was not released, though there will be a different pricing structure for end users buying the software directly and for system integrators buying the software to offer testing to their clients. Anyone can obtain a free evaluation copy of the program, fully functional and good for 15 days, by e-mailing a request for the download file, along with his or her name and affiliation, to
sales@integralRFID.com. The software runs only on Windows-based PCs. Instant EPC Hotspot currently works with reader five models: Alien Technology's 9780 (Class 1), 9680 (Class 1 and ETSI certified) and 9930 (Class 1); Symbol's AR400 (Class 0, 0+ and 1); and WJ Communications' MPR-5000 (Class 0, 0+ and 1). Integral RFID is working to add readers from AWID, SAMSys Technologies and ThingMagic to that list by the end of the summer.