Hochbahn, which serves half a million commuters a day, is installing TagMaster RFID interrogators at rail ties along its new U4 line.

May 11, 2010For the past 10 years, Hamburger Hochbahn, the operator of Hamburg's commuter rail system, has been employing radio frequency identification to identify rail cars and the direction they are moving. Over the next 24 months, the company reports that it is extending its RFID system as it adds two stations and 4 kilometers (2.5 miles) of track to its existing 100-kilometer (62-mile) light-rail network.

Hochbahn, which serves roughly 500,000 commuters daily, is being outfitted with nine GEN4HD Track Readers made by TagMaster, a Stockholm-based RFID firm specializing in the railways sector. Funkwerk Information Technologies, a systems integrator based in Kiel, Germany, designed, selected and built the system. According to TagMaster, the order was worth 1 million Swedish krona ($132,000). 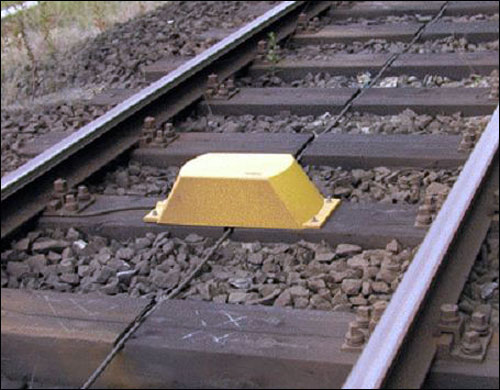 As part of Hochbahn's existing system, the 2.45 GHz RFID interrogators are mounted on railroad ties (also called sleepers) near junction points, and two MarkTag HDS S1456 semi-passive tags are placed on the bottom side of each railcar. When a tag passes over a reader, it transmits a unique ID number that is received by the device. The collected RFID data is then used to notify central control-center operators regarding which trains passed which readers at what time, as well as in which direction each train was moving at the time.

The expansion, which is taking place on Hochbahn's U4 rail line, will be configured to work the same way, says Uwe Schümann, a project manager in Hamburger Hochbahn's department for train safety and communications. "We wanted a single view of which trains were moving, and where they were headed," he explains.

Hochbahn began utilizing TagMaster's RFID solution in 2004 on its U2 and U3 rail lines, including 180 TagMaster S1569 HD Track readers and 800 MarkTag HDS S1456 tags attached to train cars. Those tags and interrogators were supplied by Funkwerk IT, which also designed and built an integrated operations control and monitoring system for Hochbahn. Previously, in 2000, the company had equipped its U1 line with a 2.45 GHz RFID train-tracking system from Intermec's Amtech division. However, Hochbahn notes, TransCore, which purchased Amtech that same year, no longer offers that particular system for sale.


When Hochbahn implemented the TagMaster solution in 2004, it did not want to replace its Amtech deployment, which includes 185 RFID interrogators and is still operable and stable. As such, it tagged all 800 of its railcars with both Amtech and TagMaster tags so that they could be used on any of Hochbahn's lines, regardless of whether that line has readers from TagMaster or from Amtech. Currently, the company continues to mount both manufacturers' tags on any new trains it puts into service. Hochbahn, in fact, keeps Amtech tags on hand for that very purpose.

According to Schümann, Hochbahn did not investigate the use of a different type of automatic-identification technology for the current expansion, since the company has been satisfied with its RFID-based system from TagMaster.

"RFID doesn't require much maintenance, and it works well," Schümann states. "It was very important for us that the tags on the trains didn't require a lot of maintenance, because they're very hard to get to once installed."

TagMaster worked with Funkwerk IT and Hochbahn to develop a sturdy plastic housing for the readers, in order to protect them during construction along the train line.