The satellite TV company plans to utilize an RFID system, already live at one of its broadcast centers, to manage a total of 200,000 assets.

Jan 26, 2015Broadcast satellite company DIRECTV is implementing a radio frequency identification system to track 200,000 pieces of equipment at three broadcast centers, as well as nearly 200 smaller facilities. The system is intended to reduce inventory tracking time tenfold, the company reports, while also boosting inventory accuracy from 75 percent to 97 percent. The solution, provided by RFID Global Solution, allows DIRECTV to conduct inventories of servers and other equipment, via a combination of handheld and cart readers. The equipment, which is being tagged with passive ultrahigh-frequency (UHF) EPC Gen 2 RFID inlays, includes video compression equipment, amplifiers, routers, switches, decoders and antenna-related systems.

The RFID system was taken live in December 2014, and limited inventory checks indicate that company will be able to reduce the amount of time required for performing a full inventory from years to mere months. The next phase of the project will involve tagging and tracking assets at the company's laboratory in El Segundo, where system-development work is performed, and then at about 190 remote locations—13 of which are broadcast centers, the rest signal-collection or uplink centers—located throughout the United States. 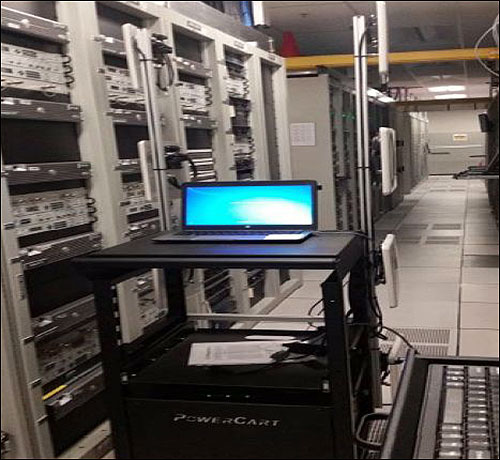 Antennas are mounted on opposite sides of the Audit Cart, so that the RFID reader can capture ID information from tags located on both sides of an equipment aisle or row, simultaneously and rapidly.

DIRECTV has three major broadcast centers, one in Colorado and two in the Los Angeles area, as well as multiple signal-collection or uplink facilities, where it receives feeds from local TV stations and operates uplink facilities that forward the collected content to the companies' satellites, explained Adam Seskin, DIRECTV's director of broadcast engineering asset management, during an RFID Journal virtual seminar held last week (see DIRECTV—Asset Management in Broadcast Engineering).

At its various sites, DIRECTV mounts a wide variety of equipment in racks, and the assets tend to be replaced as old models become obsolete, at a rate of about every three to five years. It takes the broadcast company about five years to conduct a full inventory count of all the $1 billion worth of assets at its approximately 200 locations, Seskin said, which means that in some cases, an asset could be acquired and then be retired before it was ever included in the company's software-based inventory record. To make inventory tracking more efficient and accurate, DIRECTV issued a request for proposal (RFP) to RFID vendors. It selected the Visi-Trac system from RFID Global, Seskin reported, due to the RFID company's flexibility and focus on developing a custom solution that could be integrated into DIRECTV's own management system based on its unique inventory-tracking needs.

"Their mission was to improve accuracy and efficiency of their inventory processes," Diana Hage, RFID Global's CEO, said during the virtual event, recalling the requirements that DIRECTV brought to her company (see RFID Software That Delivers Business Metrics). "Not only did they want to improve insights and have a view into what they have at what locations," she added, but the firm also wanted to capture data that would allow it to collect business analytics regarding the history of different types of assets as they are stored or moved throughout DIRECTV's facilities.

With the new solution, DIRECTV is applying a variety of UHF tags from Omni-ID and other vendors, with a choice of tag depending on each asset's form factor and the amount of metal it consists of. New equipment is being tagged as it is received at the company's three largest broadcast centers, as well as at a distribution warehouse in New Hampshire. When new assets are received at the loading docks, RFID tags and serialized bar-coded labels are attached to those items, and the ID number of each tag and label is input into the Visi-Trac system, linked to the asset itself, as well as to the device's serial number, make and model. Most tags are attached via an adhesive, though some come with a hole that allows them to be attached to a knob or other metal loop so they can hang loose from the item.

When the item is mounted on a rack, its location is also stored in Visi-Trac, which can then share that data with DIRECTV's own inventory-management software. Each rack has its own RFID tag, and the rack's tag ID is automatically linked to the asset's tag ID with a Motorola MC3190-Z handheld reader from Zebra Technologies.

For inventory checks, workers use the Zebra handheld readers, as well as RFID Global SmartCarts, to read the tag IDs of racks and equipment. They then transmit that data back to the Visi-Trac software on DIRECTV's server, via a Wi-Fi connection.

The hosted Visi-Trac software, running on RFID Global's server—which functions as an interface to DIRECTV's back-end server and can be accessed by the readers—enables personnel using the readers to view exceptions, such as a misplaced item, as they conduct inventory checks. It also has a find feature to allow a user to locate an asset, and enables real-time editing to add information about that item (such as maintenance provided or damage detected), or a new location for it. On the laptop computer mounted on Audit Cart, users can view the broadcast center's layout on a map, with each rack appearing as an icon that changes color to show that its tags have been read. Users can then drill down to a specific asset mounted on that rack, if so desired.

In addition, Visi-Trac allows management to log into the software in order to view what equipment is located at all three broadcast centers. In the future, as the laboratory and additional remote locations are added to the system, equipment at those sites will be visible in the software as well.

Not only does the technology increase the speed of inventory checks, Hage said, but it should also make them more accurate. Mistakes are often made when employees cannot find or incorrectly input the serial number printed on an item, whereas RFID guarantees that the correct ID will be automatically captured.

What's more, Hage said, the software also enables the collection of data that the company uses to track asset lifecycles and perform other business analytics. This includes determining how long particular assets dwelled at specific locations, or how frequently they were moved.

DIRECTV plans to put the technology to a full test for the first time during the coming weeks, by conducting a complete site-wide inventory check at one of the broadcast centers in the Los Angeles area. In the past, Seskin explained, such a check required that a team of workers walk through the assets scanning bar codes or reading serial numbers for three months to connect a full inventory count. With the RFID-based system, however, he expects that a full site-wide inventory check will require just two workers and 10 working days to accomplish. After that, he hopes to conduct such inventories at each of its three largest broadcast centers once a month until inventory accuracy reaches 97 percent.

If Seskin can account for 22 percent of assets that were previously overlooked (due to inventory accuracy being only 75 percent), he said that would provide visibility to approximately $220 million worth of assets that had been missed or misplaced.

Seskin said he may ask equipment suppliers to tag their products before shipping them to DIRECTV. However, it can be difficult for a manufacturer to know the best location for tag attachment, especially on larger units for which there is a standard tag-mounting location, and for which tag placement can be critical.

At its larger remote uplink and signal-collection facilities, DIRECTV will provide RFID readers to staff members after the system goes live in the laboratory. The larger uplink facilities have about 3,000 to 5,000 assets, while its three largest broadcast centers each contain 20,000 to 40,000. Furthermore, smaller remote uplink facilities known as telco points of presence (POPs)—owned by third-parties and shared with other companies—are unmanned and have fewer assets (approximately 100, and those will be tagged last). Seskin expects the entire RFID rollout to be complete in 2016 or 2017.